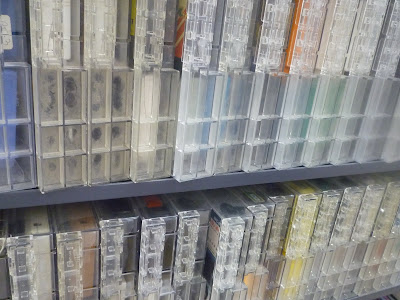 This is a relatively brief post about a store called Book Eco, which is out in the eastern part of town and, despite its name, probably sells more video games than books. They have a decent selection of Famicom games in the lot so I thought they were worth a blog post in this series.

Unfortunately, its not much of an interesting store, everything is just organized on orderly shelves without much effort made at displaying them in an attractive way and they don't have anything particularly unusual or rare. Most of the games are kept in these big plastic anti-theft devices as pictured above, which really robs the Famicom carts of their charm.

This store's main claim to fame is that it has the cheapest Famicom carts in town. I don't mean that they have the best prices in town, just that the prices they sell their cheapest games at is the lowest in town. Check out this copy of Harakiri Stadium for example: 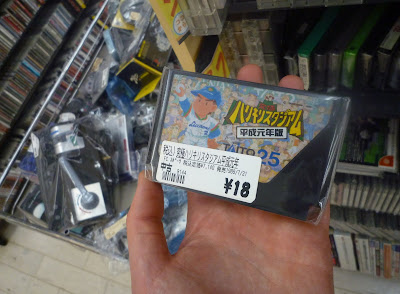 18 yen. That is about 20 cents US. This was the cheapest one they had on my recent visit, but I know for a fact that they sell them for as little as 10 yen each, as that is how much I bought my copy of "Soccer" for from them way back when.

The interesting thing about this isn't so much the price per se as it is the lengths to which they went to prepare such a cheap item for sale. I mean, they wrapped it in plastic, printed out a price tag that, in addition to the price, has the game's name, date of original release and genre on it, and then put it on the shelf in order. When you buy it, they put it in another bag and give you a receipt. When you calculate the labor and material cost to the store of doing all that, it must be way more than 18 yen. You really have to wonder why they bother. Pretty much any other shop and they would just dump anything selling for less than 100 yen or so into a junk bin or something. Not at Book Eco though!

It is interesting the way they toss these things into the plastic anti-theft cases too, here we have two carts, the bottom of which is selling for more than 100 times more than the upper one: 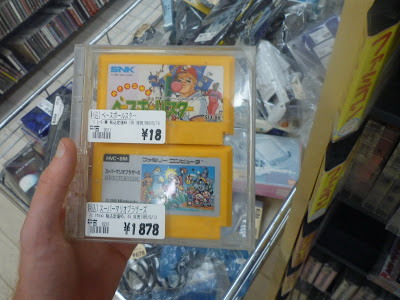 Super Mario Bros. is really slumming it there.