I've been meaning to put up a few pictures of some of the shops I frequent to purchase Famicom games. I stopped at a couple today and took some shots.

This first one is called Omocha Souko (which roughly means "Toy Warehouse") and is one of those general used toy/comic/CD/video game/musical instrument/clothes stores that have sprung up everywhere in the past decade or so. Those are also pretty much my favorite kind of store so I like this development.

This is probably the store I frequent the most. Its regular prices are about the same as everywhere else but every once in a while it will just dump a huge pile of Famicom (or other game) stuff on sale in the "junk" bins for insanely cheap prices. I've gotten a lot of my stuff this way. They didn't have much Famicom stuff in their junk piles today, though they did have a few Sega Dreamcast consoles for 300 yen (about $3) each.

Its kind of a cool store with this Showa-retro decor. This is the entrance: 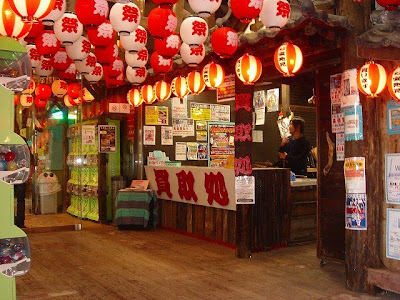 I actually got this picture from their website, here:

This is their racks of Famicom and Super Famicom games: 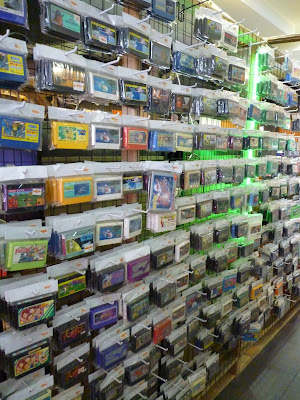 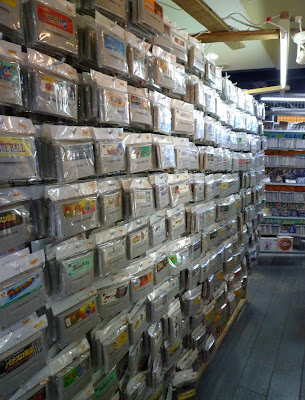 They've got a pretty good selection. I wanted to take some pictures of their big Famicom display where they keep the stacks of consoles, but it is near the cash register and has a big "no photographs" sign next to it so unfortunately I couldn't get any.

Another shop nearby is this one:

I'm not sure how they don't get sued for this flagrant violation of this James Bond-related trademark, but somehow they seem to get by. Strangely they don't have any James Bond stuff for sale in the shop.

They've got a pretty decent Famicom selection here too, though they don't generally put Famicom stuff in their junk bins like Omocha Souko does so I haven't bought as many games here. This is, however, the place where I bought the very first Famicom game in my collection - Clu Clu Land.
Posted by Sean at 3:58 PM No comments: