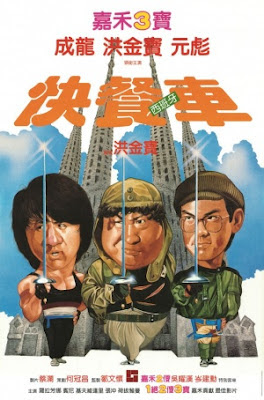 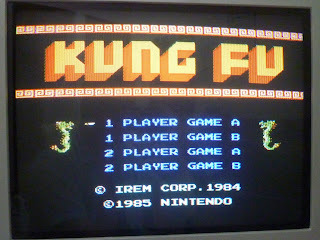 If you avoid trying to make any sense of the plot or characters though it does stand out as one of those so bad it is good movies. Lots of 80s style kung fu kicking and that sort of stuff.  Sylvia does get kidnapped and Thomas and friends do actually have to fight their way through an army of kung fu bad guys to rescue her at the end so there is some similarity with the game, though all this takes place in Spain for some reason.  There is a lot of humor throughout, some translates well, a lot does not.  Still worth a viewing though!
Posted by Sean at 10:13 AM 10 comments:

Puck Man Says: I am so Pucking Awesome. 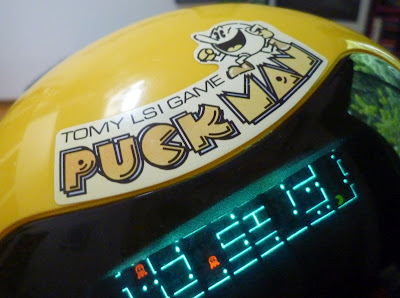 Went to Mandarake two days ago. Looked in their glass case. Saw the above. Price was reasonable. 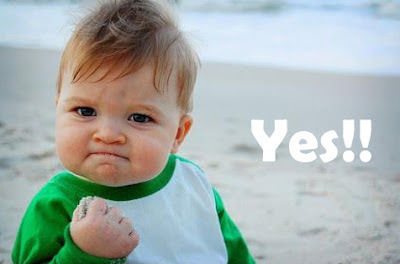 When they discovered the ease with which the `P` in Puck could be turned into an `F` by 1980s kids with their devilish (dare I say?) senses of humor, they hastily changed the name to Pac Man.

So I don`t think it was ever known as Puck Man in North America, but for a short time that was the name of the game in Japan.

It is very hard to find physical remnants of this little quirk in the history of Pac Man, in fact my new Tomy handheld is the first time I have seen anything with Puck Man on it. By the time the game was released on the Famicom here it had already adopted the new name so I don`t think there are any other home game releases with the Puck Man title. 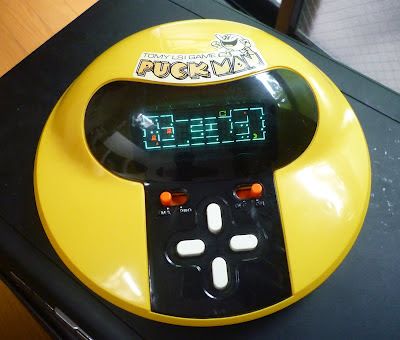 It was pretty cheap owing to the fact that it did not come with the box (which would have been a nice touch but I`m not complaining). I ran straight from Mandarake to the 100 yen shop to pick up some batteries and was really pleased to find that it works perfectly.

For an early 1980s handheld it is a pretty good game. You have two settings, amateur and pro. I`ve only tried amateur. Basically it is Pac Man only the screen isn`t the same as in the arcade or console versions and you don`t have the same range of movements. The sound effects are awesome though, it plays the Pac Man tune when you turn it on. Music to my ears. Literally. 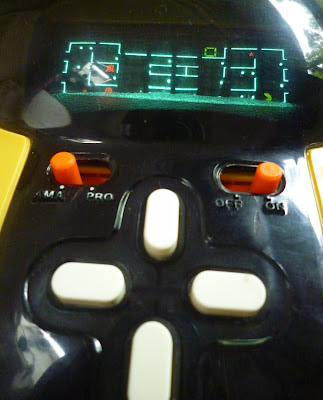 I love everything about this actually. The design is perfect. It actually looks a bit like Pac Man...er I mean Puck Man. It also looks somewhat like a microwaveable container with buttons. But, you know, in a good way.

A very nice addition to my growing handheld collection:)
Posted by Sean at 8:42 AM 12 comments:

Them Hard Off Label Peeling Blues. I got `em. Got `em real bad. 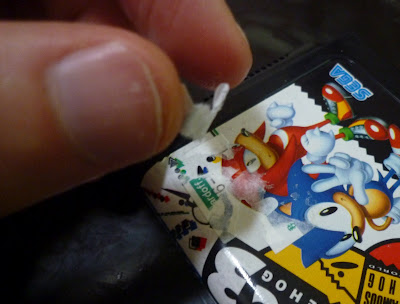 Famicomblog is...almost back! One more week and I should be back to normal! In the meantime I thought I`d take an hour here to do an homage post to the Hard Off price tag blues which, as the title suggests, I got.

It seems every hobby has its common annoyance that enthusiasts enjoy complaining about. For Famicom collectors resident in Japan far and away the biggest of these has to be the Hard Off price tags. You can find some really great deals in those shops, but when you get your stuff home you always have to deal with the Hard Off price tag blues. They use the most ridiculously adhesive price tags in the world.  They are a massive pain in the ass to get off. And they always put them directly on the cart!! Heaven forbid that you should find some good CIB stuff at one of those shops because it will have one of these price tags directly on the box and it WILL remove part of the surface of the box when you take it off.

Let me show you what I`m talking about. Take this copy of Sonic the Hedgehog 3 for the Mega Drive I got at one a while back at a Hard Off here in town: 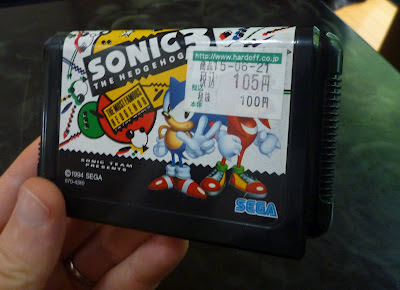 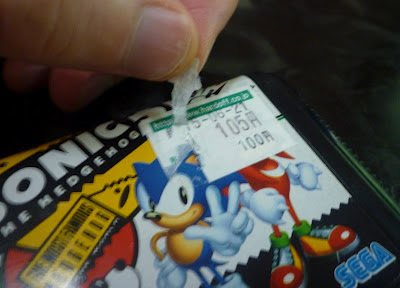 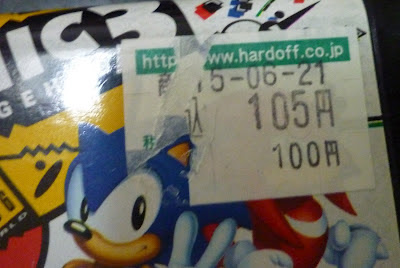 Step 2: Have a go at the opposite corner: 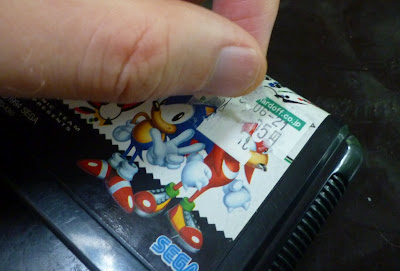 Now you`ve got kind of a V shape going there: 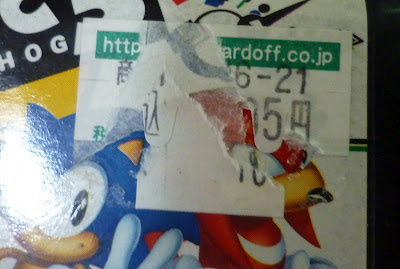 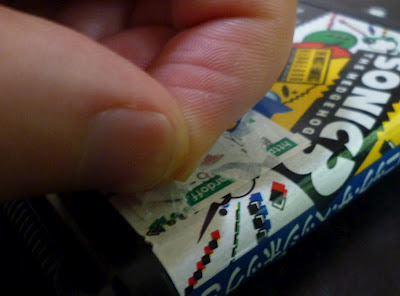 Until you have a cart that is mostly clean: 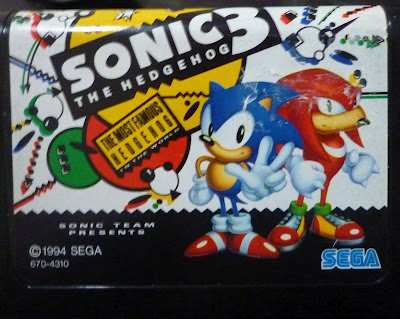 And a pile of sticky little price tag remnants to dispose of: 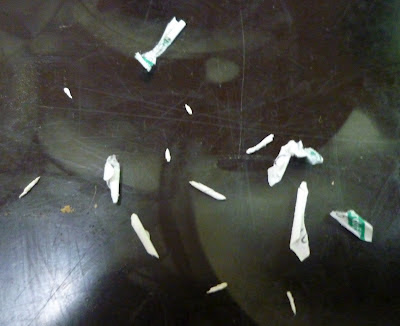 Email ThisBlogThis!Share to TwitterShare to FacebookShare to Pinterest
Labels: Hard Off 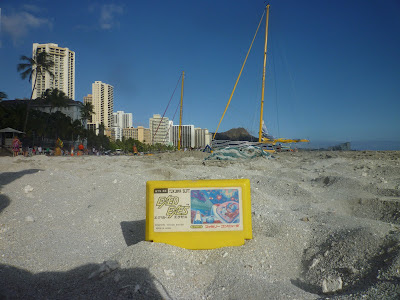 I was in Hawaii for a few days earlier this week. Unfortunately it was not a pleasure trip, but rather for business so I didn`t have much time to myself. I did manage to sneak in a few hours on Waikiki beach though.

Before leaving Japan I thought it would be nice to bring one of my Famicom carts along for the trip. I wandered over to my Famicom cart shelf and for some reason Exed Exes just looked like the right cart to bring. Must be the yellow - reminds me of pineapples.

Anyway, if any of you were wondering what a used Famicom cart would look like on Waikiki Beach, you now have your answer!

Also, just as a matter of blog-related news, I should be getting back into regular posting in a couple of weeks. The end of my insanely busy time is coming into view...
Posted by Sean at 9:48 AM 15 comments: