Crazy Climber and the Perils of Collecting Loose Famicom Carts

I picked up a complete in box copy of Crazy Climber at Omocha Souko yesterday. At 2000 yen (about 25$ US) it is both the most money I have ever spent on a single Famicom game (which is saying something about how much of a cheapskate game collector I am as that isn't much) and one of the best deals I've ever gotten. 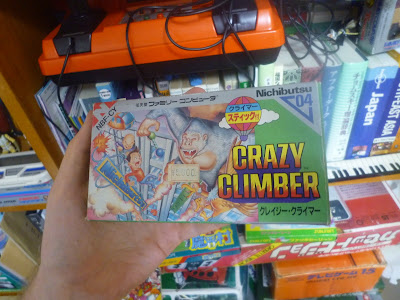 Crazy Climber CIB is a tough one to find, especially in good condition. You'll notice from the above photo that the box is a bit longer than most Famicom boxes. That is because it comes with "Climber Sticks" that are necessary accessories to play the game. It is also one of the reasons true CIB copies of this game are hard to find - so many bits and pieces go with it which might have gotten lost over the years. Mandarake had one a couple of months ago for 7,000 yen.

I figured this one was probably incomplete at such a relatively low price, but I opened it up and discovered it had everything inside, in mint condition to boot: 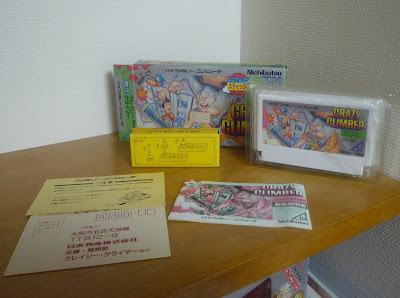 I bought a loose copy of this game last year. I'd never played it before but I had really wanted it for a long time. "Crazy Climber" is a really cool name for a video game, it sounds fun. And the cover art also looks cool.

But when I popped it in for the first time to play it? It sucked. No matter what combination of button-pushing I did on the controller I could not get the guy to climb up the building. It was massively frustrating and I instantly disliked this game.

As those of you familiar with the Famicom Crazy Climber undoubtedly already know, the reason I was having so much trouble was that Crazy Climber has without a doubt the most unusual control features of any Famicom game out there.

Not having the manual, I didn't know that.

With a lot of games, you can buy loose carts without the manual or box safe in the knowledge that your general video game expertise will probably be sufficient to figure the game out. Like Xevious or Exerion for example. Those are games that I had never played before but had no trouble figuring out in about 10 seconds even without the manual. Shoot the bad guys - OK, say no more.

Crazy Climber though is one of those games where just the cart alone is not enough. Your general video game knowledge will not be enough to get you through it. You need the whole thing.

Of course the internet has a lot of info, so even before I bought the boxed game I had been able to figure out what my problem was - mainly that I was only using one controller when you have to be using both of them simultaneously.

The game's actual manuals are usually a bit more to the point that online ones (a lot of which tend to be console-neutral) and I couldn't play it well without the Climber Sticks (I had one that I got in a junk bin, but you need two), so I'd been in the market for a CIB Crazy Climber for quite some time.

Anyway, I'm massively satisfied with this game now. This is what the two climber sticks look like on the controls: 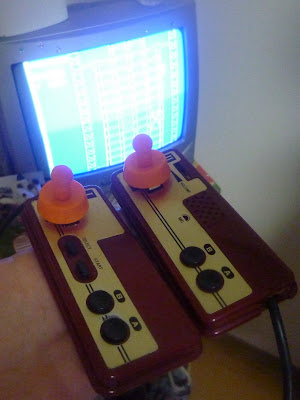 With the help of these and the manual I am now able to navigate my climber to the top of the building, avoiding all the obstacles on the way. It is quite an interesting game, actually. The mechanics of using both controllers at the same time makes this a truly unique game in the Famicom catalogue, I don't think any others do that. 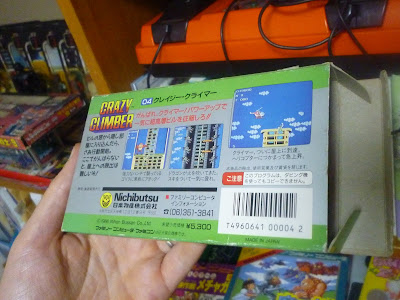 The box is pretty cool too. One thing that I noticed is that this one has a manufacturer's suggested retail price (5300 yen) printed right on the box (bottom centre in the above photo). Most Famicom games don't have that. PC Engine games (HuCards) all have that on the back and I always thought that was kind of neat for some reason. Especially when I pay 100 yen for a game that says "6000 yen" on the back. I like to pretend that I actually paid 6000 yen for it. Makes me feel like a big shot.

Ahem, anyway I'm revealing too much about myself here. Bottom line is that if you are going to get Crazy Climber for the Famicom (and I say go for it) be sure to get a CIB copy and not cart-only. You'll save yourself a lot of headaches that way!