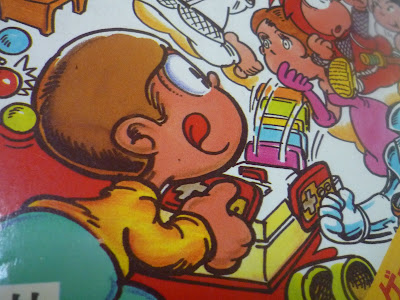 In addition to the above cover image of the Famicom, another little thing I like about my recently acquired Hisshou Sakusen Mecha Guide is the last page: 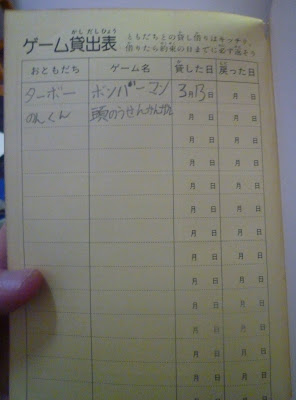 This is a page for kids to record which games they have lent out to friends. From left to right, the columns are titled "Friend", "Game's name", "Day it was lent" and "Day it was returned".

This page, incidentally, is the reason this guidebook was much cheaper than the rest: because the kid who owned it had actually filled it out. In the guide collecting world, this is considered serious damage.

I'm rather pleased that he or she did so. The first entry states that the guide's owner lent Bomberman to a friend called "Turbo" on March 13. Either it was never returned or he just didn't bother to fill that column in when it was. The second entry states that Atama no Usenkan Garu, a game I have never heard of, was lent to a friend named "Non-kun". By that time the guide's owner was no longer interested in recording dates of any sort, and thereafter he seems to have abandoned use of the guide for this purpose altogether.

An extremely brief career this guide had as a record of a kid's lending activities, but its kind of interesting nonetheless.

As I wrote about in an earlier post, a lot of Famicom carts out there have kids names on them. 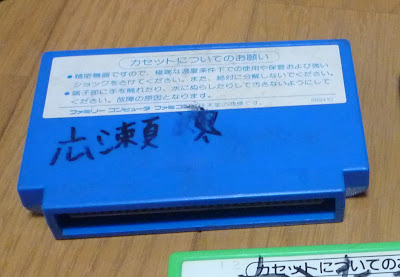 This is mainly a legacy of their having been traded with friends - a way of ensuring everybody knew which cart belonged to which kid.

My wife used to do this when she was a kid too, so much so that a lot of games she isn't sure if she had them or had just borrowed them from a friend. I think that is kind of cool.

Cartridges, I note, are ideally designed for trading like that. They are sturdy and can survive roughing it in a kid's backpack for the trip to and from school or a friend's house. Disc based games were much less well suited to this - the jewel CD cases the PS1 and Saturn games came in are pretty easily broken and the sturdier post-PS2 cases are a lot bulkier than most carts.

Digital distribution, of course, makes this sort of interaction among friends impossible. Which is yet another reason why it is bad.

Another interesting thing about this is that the Famicom's dominance probably facilitated game trading in Japan much more than elsewhere. As a kid in the 80s I played games first on an Intellivision, then a Commodore Vic-20 and later on an Apple IIC. I didn't get an NES until 1989, when I was 13.

My problem - and a lot of friends had this too - was that nobody I knew had a Commodore Vic-20 or Apple IIC. It seemed everybody had different computers or consoles. We couldn't trade games with each other since everybody had software that was incompatible with what everybody else had. If you wanted to play each other's games you had to go to the other kid's house, which always sucked because they (having the benefit of practice) would always kick the crap out of you on whatever game it was.

Probably kids with NES's didn't have this problem so much. One of those rare examples of a near-monopoly producing benefits for consumers. Go figure.