Opinion: On the economics of retro game collecting 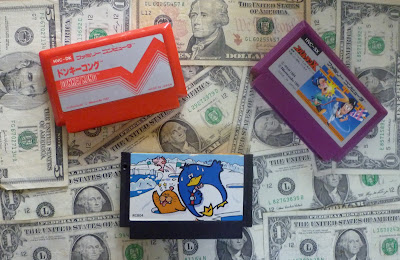 I've been noticing in the past few years that some insanely high prices are being paid for some of the rarer retro video games. These would include the "Gentle Physics and Science of Hazardous Materials" for the Famicom going for about $4,ooo or Nintendo World Championship Gold Edition going for $20,000. All this money being blown on games that have absolutely no playing value raises the question of whether or not retro games are really worth that much.

As a general rule I don't spend any serious money on retro games. My basic standard is that if a game costs more money than I am willing to completely lose then I don't buy it. Right now that hovers at a maximum of about $15 a game, which is what I figure a couple of hours of entertainment is worth.

That said, I certainly acknowledge that there is also a collector value above and beyond the play value which could drive reasonable people to pay much more than that for an old game. As with any market, the basic laws of supply and demand will determine the price people are willing to pay for them. In the long run though is it useful to look at these things as an investment?

For a parallel, I look to the baseball card market that flourished about 20 years ago. When I was a kid in the 1980s/ early 90s I amassed a gigantic collection of baseball cards under the assumption that by 2010 they would be worth a fortune. All through the 1980s the prices of baseball cards just went up and up so at that time this seemed a reasonable proposition.

To give you some idea of how well that plan worked out for me, when my parents moved recently I was told to get rid of all my old stuff in their basement, including my card collection. The only quick and effective way I could find to dispose of them was to pile about 30,000 of them into the back of a truck and drop them off at the local Salvation Army. They simply had no value.

Of course, those were all mass-produced cards from the late 80s/early 90s for which there exists no market because the manufacturers were turning out, by one estimate, approximately 81 billion cards per year at that time. The older, harder to find cards retained their value, right?

Well, actually, no. With the exception of a handful (literally) of exceptionally rare ones, like the 1909 T-206 Honus Wagner, pretty much all the old cards have lost value too. One example is this baby: 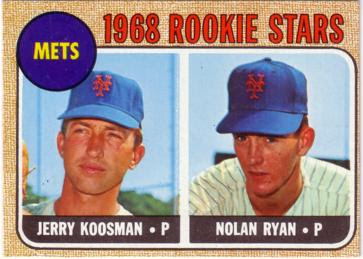 This is the 1968 Topps Nolan Ryan rookie card. It wasn't overproduced and there probably aren't that many copies of them out there in top condition. If there was a card in 1991 that seemed like a safe investment, this was it. At its peak in the early 1990s this card was listed at $1200 in Beckett's, the main card price guide. Since then, Nolan Ryan retired, got inducted into the baseball hall of fame on his first try, and pretty much avoided all the scandals that rocked baseball after his departure.

Despite this, the last time I checked a Beckett's this card was listed at $500, meaning a loss of $700. But from an investment point of view the drop in value has been way greater because of the time value of money. If in 1991 you had $1200 to invest you could have either a) bought the Nolan Ryan rookie card; or b) invested in some sort of stable, diversified financial instrument that delivered a conservative return of 5% per year.

If you opted for a) you would now have a baseball card worth $500. If you opted for b) you would have an investment worth over $3,000. So really it would be more accurate to say you lost $2500 by putting your money into the Nolan Ryan rookie card - a card that, it should be said, has held its value better than most others.

Anyway, enough about baseball cards, what does this have to do with retro game collecting?

For one, its worth noting that what I said about the baseball card market applies to a lot of other collectible markets that went through similar bubbles - like stamps and comic books. In those too, over the long run an extremely small number of the most sought after examples have gone up in value (like Action Comics #1 with Superman's first appearance) while the value of pretty much everything else collapsed after the initial rush of people pouring money into the market dried up. The only reason I can think of for the continued rise of the price of the really rare "icons" of the baseball card, comic and stamp worlds is that there enough multi-millionaires out there looking for trophies to keep the values of those pumped up. The key lesson: unless you have millions of dollars lying around with which to purchase one of those insanely rare items, don't invest in collectibles markets.

Retro video games, it should be noted, have some key differences from these other collectibles. The first is that video games have intrinsic value: they actually do something. Baseball cards and stamps are just worthless pieces of cardboard and paper that serve no purpose other than to look pretty. Comic books have a bit more to offer as they can actually be read, but they are still pretty limited. So a retro game will probably never become truly "worthless" in the way that, say, my 1989 Topps Alvin Davis is worthless. The advent of much more convenient downloadable forms of these games puts a definite limit on what intrinsic value the games have (ie less than whatever the manufacturers charge for the downloadable version), but they should still have some value.

Another thing that separates retro video games is that, at least with game cartridges, nobody is making them anymore. The handwriting is on the wall for disc-based games too, in a few years probably all games will only be released via downloadable files, which are fundamentally un-collectible. This avoids the big hammer that destroyed the baseball card market: the fact that every year massive heaps of new cards were being dumped into the market. This just further and further dilluted the value of all cards as the limited amount of money collectors were willing to spend got divided into smaller and smaller chunks between a relentlessly expanding supply of sets.

With cartridge games, however, whats out there is all that there is. When you take into account the fact that what games are in existence are still being used and getting worn out, broken, having grape soda spilled on them, etc the supply of retro games in physical form is actually getting smaller and smaller.

At the same time it should be noted that while the supply side isn't growing, this doesn't necessarily translate into increased demand. On the one hand, there are a lot of 30-somethings like myself who grew up with these games (or at least spent a lot of time looking longingly through storefront windows at them) and, now that we are adults with money of our own, will willingly shell out some bucks to get those old games. On the other hand, the fact that these same games can be downloaded with little or no effort means that the number of people specifically looking to obtain a physical copy of their favorite game will be limited.

So I think the collect-ability of a lot of games will in the long run be determined by how desirable it will be to actually own a physical copy of the game. I think Famicom games are actually on pretty safe ground there: the carts actually look cool. They come in a variety of colors and cartridge designs. Plus the Famicom is a marquee console in video game history which had an impact around the world.

I compare that to the Super-Famicom, which I don't think there will be much of a market for in the years ahead. To be certain there are a lot of great Super-Famicom games, but the actual physical carts themselves are pretty damned boring and ugly: 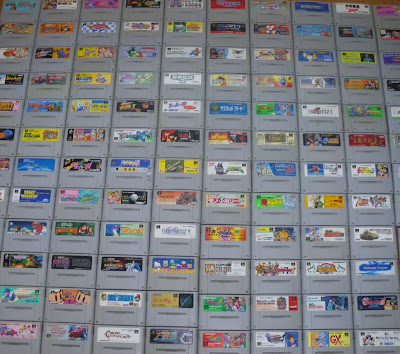 Plus they are a pain in the ass to store (they don't stack easily) and are a lot bulkier than Famicom carts (which makes them more expensive to ship). Also the Super-Famicom wasn't a revolutionary system like the Famicom, it was basically just a Famicom with better graphics. The Nintendo 64 with its 3D gameplay was the next big step after the Famicom in gaming evolution. This is probably one of the reasons why most retro game shops in Japan have massive stacks of Super-Famicom games going for as little as 10 yen each while their Famicom selections tend to be smaller and higher-priced.

So I think the market for Famicom games is probably going to be OK - in the sense that people will still buy and trade them in the future - though I don't think anybody is ever going to get rich off of them. This is a pretty healthy place for a collectible market to be - cheap enough so that people with limited budgets who do it solely for fun can still afford to buy most of the stuff out there.
Posted by Sean at 11:42 AM 11 comments:

My setups and stuff

Been busy the past month so I haven't been posting much, but I thought I'd put some pics of my hardware set ups. 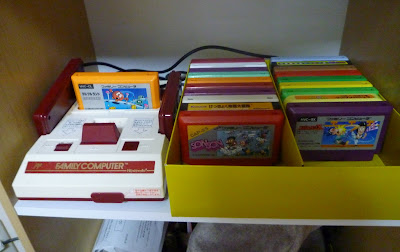 The yellow box originally contained some sweets but it turned out to be the perfect size and shape for holding famicom games.

Upstairs is the AV Famicom: 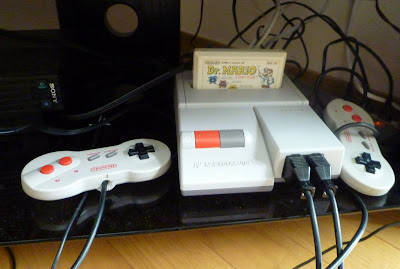 I prefer the look of the old school, but the reception with the AV famicom is a million times better so I use this one more.

I've got it hooked up to our main TV along with a Super Famicom, Nintendo 64 and PlayStation 2: 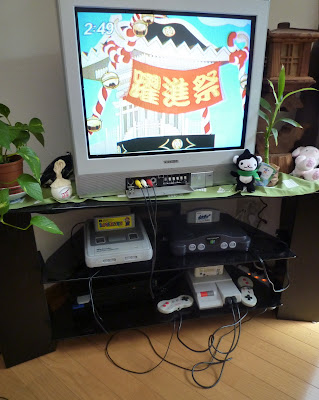 The Famicom gets played about as much as the other 3 put together.

In other news I added a few games to the collection this week. Its up to 420 total now: 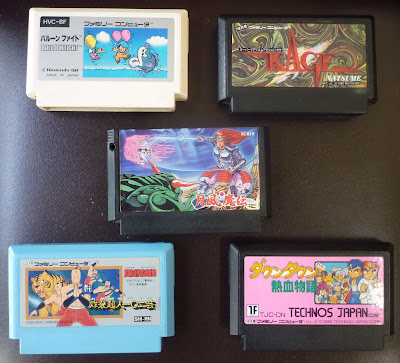 Balloon Fight and Downtown Nekketsu Monogatari are pretty damned good games. The Ramen-man one on(lower left corner) on the other hand doesn't look to promising after firing it up yesterday. I picked these up at Hard-Off in the junk bin.
Posted by Sean at 7:39 PM No comments: