Yes, I'm still alive after over a year 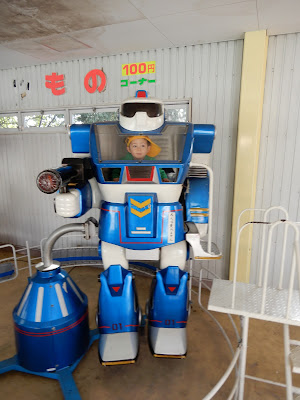 Its amazing how time flies, its been over a year since I updated this blog, which is usually a good barometer for declaring a blog "dead".  But this one isn't, its just in hibernation as its curator raises a family.

Which is a cool thing to do in Japan because sometimes you find coin operated Mobile Robot suits like the one in the above photo which was taken over the weekend.  I need to get one of these for our living room.  I was thinking it would have been the most awesome Famicom controller ever, and I hope Nintendo will release one, maybe for Formation Z or some other game, in the near future.

Will be back in 2018 with another update, maybe sooner.  I haven't bought a video game in over a year, which is really the main reason for this blog's inactivity.  When the occupant of the above Mobile Robot suit is old enough, I'll probably break the Famicom out again and find some more reasons to post :)
Posted by Sean at 4:20 PM 10 comments: