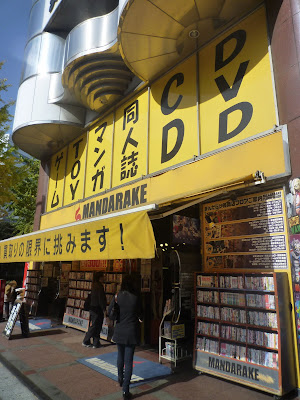 Today's events saw me in the middle of downtown Fukuoka in the middle of the afternoon with a bit of time to spare so I took the opportunity to drop by the next shop in my series on Fukuoka Famicom stores: Mandarake.

Mandarake is the most famous game and general-otaku goods store in Fukuoka. Its the only one of the "big" Japanese retro game stores that has a branch here. Super Potato for whatever reason has given this burg a miss.

Mandarake is pretty well-known among those of us who are trying to put together the whole Famicom collection because a couple of years ago they put together a complete set of all 1051 carts and offered it for 650,000 yen at their Tokyo main shop.

Unfortunately they've never done that at the Fukuoka store, but nonetheless it is definitely the most prominent Famicom shop in Fukuoka. I love 007 and Omocha Souko, but Mandarake really just blows them out of the water in a number of ways, as I'll show below.

Before moving on, I have to apologize for a bit of a dereliction of my blogging duty. Mandarake is a twin-headed beast for those of us bloggers who like to put a lot of pictures in their posts. It has far and away the biggest concentration of eye-candy for nerds in all of Kyushu. Floor after floor of the stuff, all beautifully laid out in glass showcases and neat shelves. It also, however, has a strictly enforced no photography in the store policy. Signs are everywhere, posted in Japanese, English and Korean. And they have way more staff than most shops and those staff roam the aisles, so it is extraordinarily difficult to sneakily take pictures when nobody is looking. So I have to admit that my photos don't come near to doing the place justice, but that is really their own fault.

I hope you'll all appreciate the fact that I did at least make some effort to surreptitiously photograph the Famicom excellence that was on display.

Anyway, lets start at the glass showcase where they keep all the valuable games. This is located in a corner near the escalators in a bit of a blind spot so when nobody was around I was able to get a few photos of it: 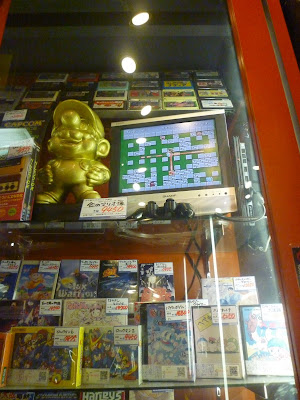 They had some pretty amazing stuff in there, like a CIB Recca for 39,900 yen (top row, second from right): 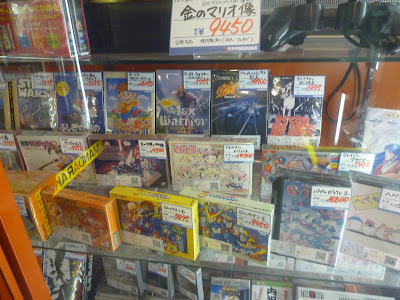 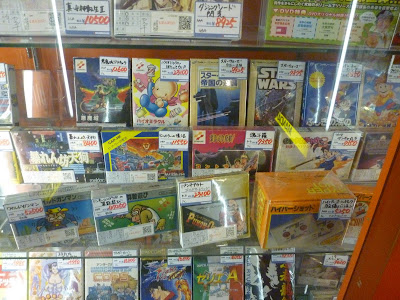 They also have a selection of expensive loose carts in the 3,000 to 10,000 yen range, with a Gold Hot Scramble cart for 44,000 yen mixed in with them. I only have 4 of these games. I can tell this is going to become an expensive quest when I start having to actually shell out serious money for the really rare ones: 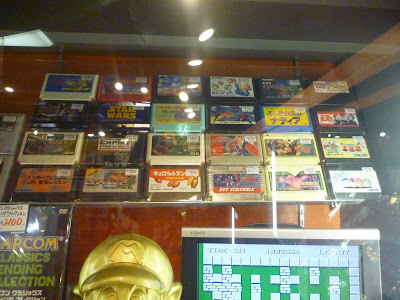 I've never bought anything out of this glass case, but I do like to have a look at it every time I hit this store. Its the stuff dreams are made of. If you look really closely you can see my reflection in the glass in the above photo. Note the stream of drool seeping from my mouth. That is how much I like this case.

That glass case is one of two things that really separates Mandarake from the other shops in Fukuoka. Its the only one that has a ton of the real "holy grails" of Famicom collecting. 007 has a small number and Omocha Souko really doesn't have any these days, though it used to have a couple.

The other thing that sets Mandarake apart is its non-glass case Famicom stuff: 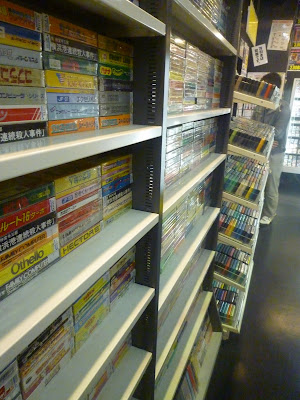 They have an absolutely insane quantity of boxed stuff. All the games in the shelves in the above photo are Famicom games, the Super Famicom and other ones are elsewhere.

I really wanted to get some close up shots of the above, both the boxed game section and the loose cart section, but they are located right next to the cashier with a ton of people moving about. I became conscious of the fact that my loitering around with an odd look on my face while whipping something (my camera) into my pocket every time someone walked by probably looked exactly like the type of behavior a shoplifter would display, so I decided to call it quits with the pictures then. As you can see, though, they have quite an impressive selection.

Anyway, the outside of the store is quite impressive too: 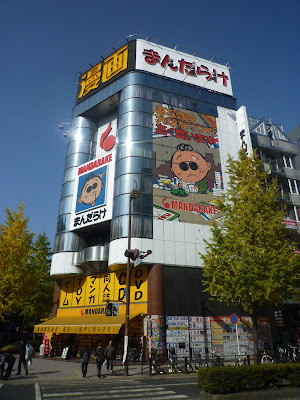 They've got posters up advertising all the stuff they want to buy: 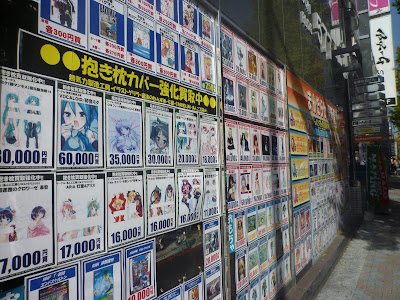 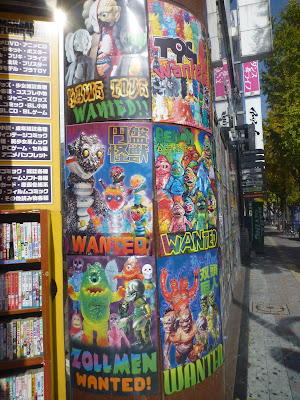 I don't know what any of that stuff is, but if you've got it, they want it.

Feeling a bit guilty about having thumbed my nose at their no-photography rule, I resolved to buy something from them as a means of atonement. I went over to their video game book/magazine section to see if they had anything interesting. I was pleased to discover that they had a few Famicom guide books, so I picked up this baby for 315 yen: 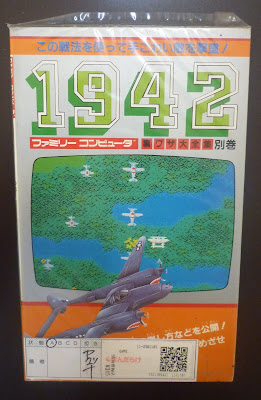 Famicom guide books are extremely hard to come by in Fukuoka, this is the only shop that I've ever found them at. I should note that this isn't the instruction manual, but a guide book originally sold separately from the game. Most shops have shelves overflowing with guide books for Super Famicom, Playstation and other later model game systems, but I guess the Famicom had its heyday before these things became massively popular here.

They had a few Famicom ones, but most of them were over 1000 yen. I guess the 1942 one might be relatively easy to find. It is also really short, only 32 pages. 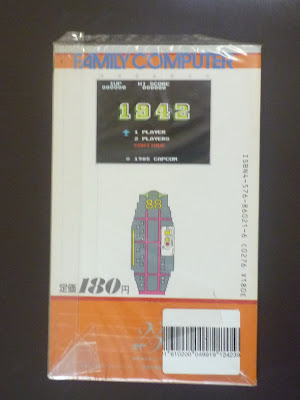 Anyway, I really like "1942" and thought the colorful cover of this one was too good to pass up for that price, even if the internet has made these books completely obsolete. I mean, check this out: I now have a 1942 "set": 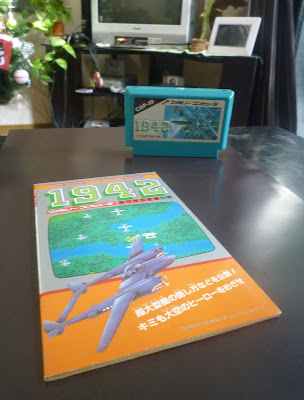 Anyway, you might remember from my first post in this series that I intended to compare prices between shops. Generally Mandarake's prices for loose carts are reasonable, but it isn't the type of shop like Omocha Soko where you'll find some amazing deals. The boxed games are insanely awesome and priced in a way that reflects the fact that they are aware of this.

I found 5 of the carts I was comparing and this is what they wanted for them:


Basically SMB3 is cheap, Spartan X is a bit on the high side and the others are about right.

There you have it, Mandarake in Fukuoka. Now I'm off to read my new guidebook and try to top 2 million points on 1942: 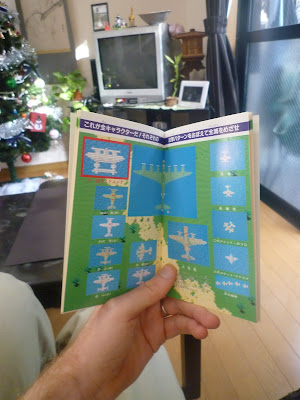