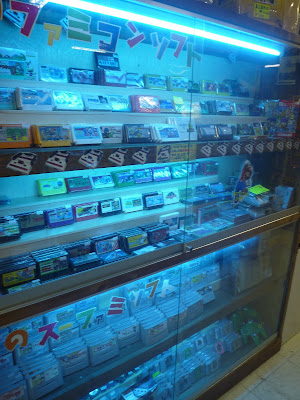 This is going to be the first in a series of posts in which I explore the retro game shops of Fukuoka and uh....write.....stuff. About them.

Fukuoka has a ton of game shops, but its a bit of a challenge to explore them as they are scattered throughout the city and its suburbs. The mission I've set myself is to visit the ones which have a good selection of Famicom games (not all do). The main purpose is just to take pictures of the Famicom sections of these shops and show them off because, as some people have noted (here and here for example), Japanese retro game shops are a rather beautiful thing. EBay is convenient, but you can't wander wide-eyed through its labyrinthine aisles gawking at the wonderful sight that rows upon rows of colorful Famicom carts present. It simply has no labyrinthine aisles in which to do so. Japanese retro game shops on the other hand have them in spades.

A secondary purpose of my mission is to test out something that the scientific half of my mind has long suspected: the market for used Famicom games in Fukuoka's game shops is completely irrational. Let me (briefly) explain. If you are just interested in pictures of the game shop you can probably skip the next few paragraphs.

If you've ever been to Rising Stuff you may have stumbled upon the Famicom price guide that they put together after what must have been some extremely time-consuming (though undoubtedly fun) research. I give them (or possibly just one guy, "Alex" who posted it, I'm not sure) a lot of credit for undertaking that gargantuan task. I think they did quite a good job of it and I sometimes refer to it out of curiousity.

That said, I have to say that the prices in it are not really reflective of the prices charged for games in Fukuoka. That isn't their fault though as NOBODY (yup, all-caps) could make a definitive Famicom price guide for this city. Every shop charges different prices for the same stuff and there is absolutely no logic to any of it that I can determine. A game that one shop puts lovingly into its exclusive glass case with a sizeable price attached to it another one dumps unceremoniously into a junk bin at a blow-out price. And vice-versa.

So just to test this little theory I chose these 6 games that I would like to compare the price of in each of the shops I will visit: 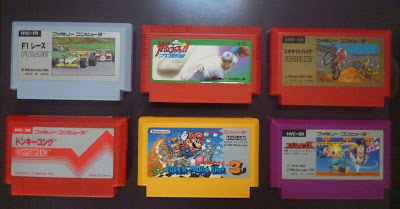 These are all games that were very popular in their day, meaning that there are tons of copies of them out there and I am thus likely to find them at most of the shops in Fukuoka. At the same time, they are games whose continued popularity is quite different from each other. Super Mario Brothers 3 remains immensely popular and most shops charge a premium for that one despite it being extremely easy to find. Moero Pro Yakyuu on the other hand is a game that there are just way too many of: sports games don't generally age as well as platformers and that is one of the games that will inevitably be the cheapest game at any shop. The others fall somewhere in between, with Spartan X, Excitebike and Donkey Kong being a bit more popular like SMB 3 and F-1 Race a bit less.

Anyway, that out of the way with here is today's Fukuoka Famicom shop: 007. 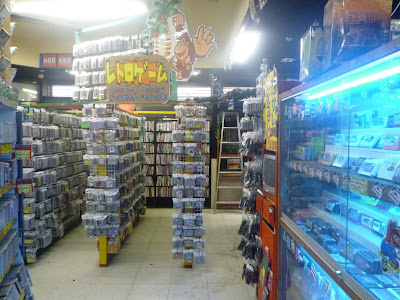 007 is a huge store in a one-story building (not counting the parking lot on the roof). It sells not just games but comics, toys and other novelty items. It has a pretty big retro-game section, the highlight of which is of course the Famicom stuff.

They've got parts of 3 aisles devoted to Famicom games in little plastic bags hung from pegs: 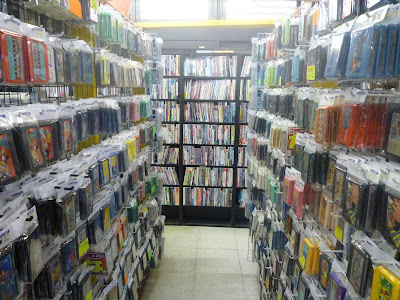 It is pretty colorful in there: 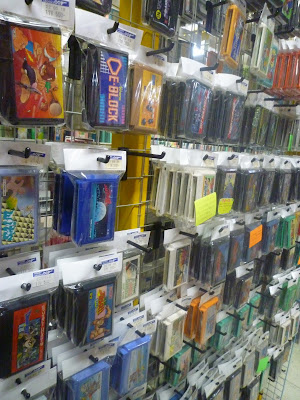 One of the things a lot of people (including me) like about retro game stores here is the hand-written signs describing the game, which 007 puts on some of them. Its such a nice touch: 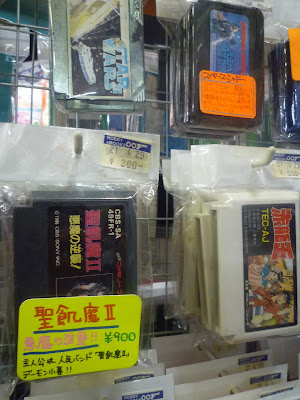 They have a small selection of boxed Famicom games. Nothing too special, they just take up a little shelf: 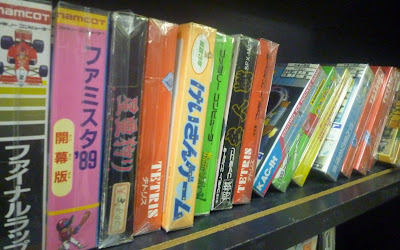 Contrast that with the size of the boxed Super Famicom game section: 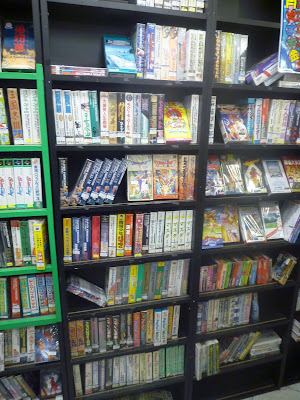 The part of 007 which I like the best is their glass showcase. They've decorated it with a lot of cut-out letters and pictures, giving it a sort of folk-art feel that is affectingly complemented by the Bladerunner-esque neon blue lighting: 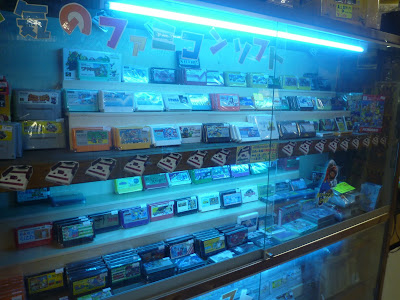 Basically most of the games that they price at over 1000 yen go in there: 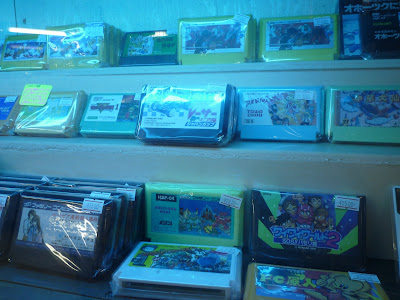 And their AV Famicoms which, paradoxically, say "NEW" in English and "USED" (中古) in Japanese: 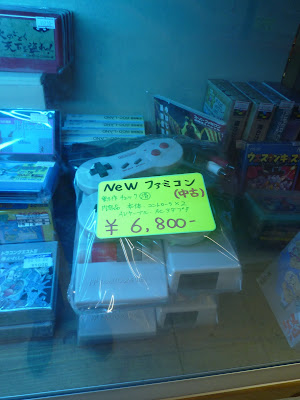 On either side of the case they have little 14 inch TVs, one hooked up to a Super Famicom and the other to a Famiclone for customers to play: 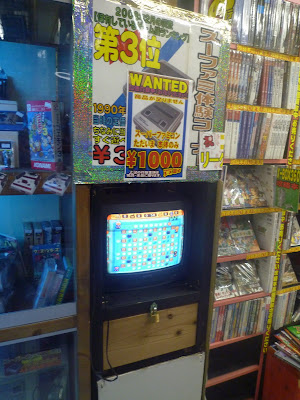 I always like playing games at shops like this better than I do playing the same games at home. I don't know why but somehow it is always funner that way.

Well those are the pictures. On a personal note I have to say that this is one of my favorite game shops simply because it is where I bought the first Famicom game in my collection: that copy of Clu-Clu Land which graces the banner at the top of this blog. That was quite an exciting purchase, one of the highlights of my Famicom collecting experience. I had just gotten my first Famicom console at another store earlier in the day (kind of an impulse purchase - look at what it has led me to) and my wife took me to 007 late that night to find a game to test it. It was my first time to explore a Famicom game section and I was immediately hooked. She had owned Clu-Clu Land as a kid and I bought it on her suggestion. Getting home it took me about 4 hours of banging to get the Famicom to load Clu Clu Land on our TV but when it worked - crap reception and all - I felt pretty damn good. All thanks to 007.

Anyway, now to look at the secondary purpose of this trip, the prices:

We'll see how these compare to prices in other shops in later posts.

Before signing off I should say thanks to Sketcz for his insightful write up about Famicomblog on the amazing Hardcore Gaming 101. His post and particularly this quote:

"the more layers of gimmickry and unsought complexity you place on something which is intended for recreation, the less interested I become."

has given me food for thought on numerous future posts that I hope to put up here!