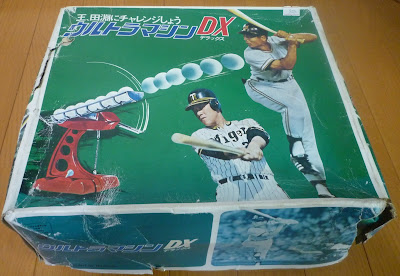 This is the other thing I bought at the flea market yesterday. We were wandering the vendors when I spotted this in the middle of a bunch of junk at one of them run by a cheerful middle aged woman. It was only 800 yen (about 10 bucks) so I snapped it up, even though the box (and the thing itself) is in pretty rough shape.

What is it, you may ask? It is Nintendo's Ultramachine DX, a batting practice game for kids. I've wanted one of these since I saw it on Erik's great Before Mario blog, where he has done an excellent write-up about it with some good pics of the other versions released.

Not wanting to repeat what Erik has already written I'll just add a few observations of my own about this thing. As the box indicates, it was released in 1977 by Nintendo: 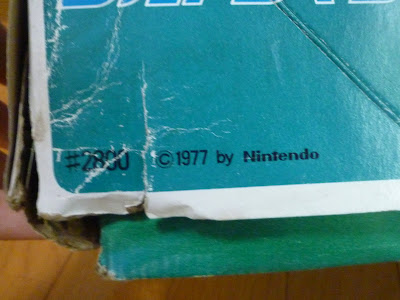 Mine was not complete as it didn't come with any of the ping-pong balls that they originally came with. It seemed to have everything else though: 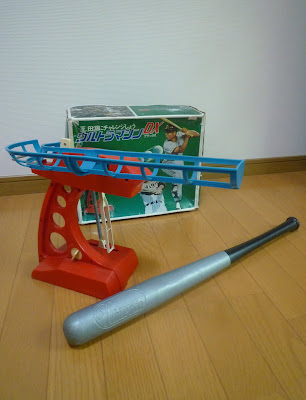 My favorite part is the telescoping Nintendo bat. Now it is full length:

And blammo - now it is half size:

I think just this bat with "Nintendo" written on it like that was worth the 800 yen.

Anyway, the two players on the box are Sadaharu Oh of the Yomiuri Giants and Koichi Tabuchi of the Hanshin Tigers. These are actually two of the greatest players in Japanese baseball history, so this is of interest not just as a Nintendo thing but also as a piece of baseball memorabilia.

Sadaharu Oh is particularly well known as the world career home run champ, having gone deep 868 times in a 22 year career, over a hundred more than Hank Aaron and about 400 more than Barry Bonds hit before his head ballooned.

I particularly like this photo on the side of the box: 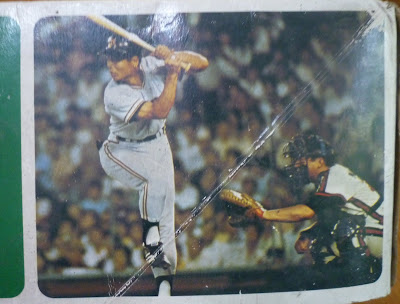 This shows off Oh's unusual batting stance perfectly. He used to stand with one leg raised and wait for the ball to come, something very few players have ever done.

Both of these players, incidentally, at one point managed my local team, the Hawks. Tabuchi managed them in the early 90s, before my time, but Oh managed for several years and only retired after the 2008 season. So I have an extra bit of interest in this thing.

I'm not too sure if it works or not, it needs batteries which I don't have and, as I mentioned above, I don't have any of the balls it came with. Either way though I'm pretty happy with it. It just looks kind of neat.