My Childhood Video Game Stash has been Found! 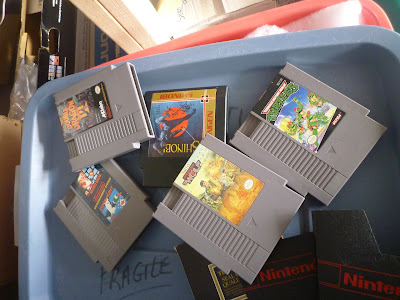 Been a while since I last posted.  Am still alive and well.  Thank you very much.

In September I made a trip back home to Canada with my family in tow to visit my parents.  It was the first time back in quite a while for me (and my son`s first time ever).  After getting over the emotional greetings, etc one of the first things my parent`s said was "There is a huge stack of your junk in our garage.  Do something about that."

While most of my childhood possessions are long gone, a selection of my old treasures has somehow managed to survive multiple moves over the decades and remain packed up in plastic bins at mom and dad's place.  And as I happily discovered while going through the boxes my childhood video games were among the survivors.

My NES Action set, still in its box, was among the first things I fished out (but forgot to take a picture of).  I didn't have a chance to plug it in so not sure if it still works, but along with it I also found my complete library of NES games, pictured above.  Double Dragon III, Shinobi, TMNT, Operation Wolf and the SMB/Duck Hunt cart that came with the console.  Yup a grand total of 5 carts that I put together over several years.  Sitting as I am now on a pile of hundreds of Famicom games, its hard to imagine how I managed to get so much entertainment out of these 5 carts back in the day, but I remember very clearly that I did.  The fact that these cost $40-$50 each in 1980s dollars, which represented several months worth of allowances for my 10 year old self no doubt explains that.

In another box I found an earlier era of my childhood video game collection, my Commodore Vic-20, complete with all the games. 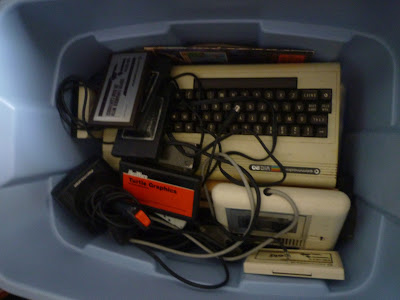 My dad bought this in about 1982 at Canadian Tire, which at the time included its own store-branded software set with each purchase. I still have the Canadian Tire card that it came with, which I think is really neat: 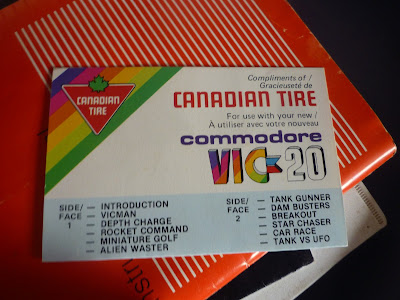 The Vic-20 operated games either in cartridge form or in tape cassette form if you had the Cassette Unit, which we did (and still do). 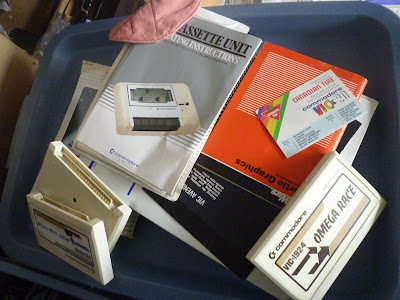 The computer itself is built into the keyboard and I remember we used to have it hooked up to a 14 inch TV in our kitchen throughout the early 80s. 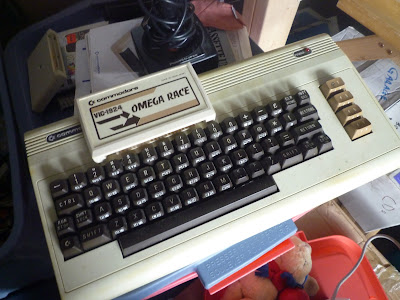 My joystick!!  Covered in dust but still existing after all these years.  Oh the fun I had with this.  That fire button hasn't been used to shoot on-screen aliens in about 25 years. 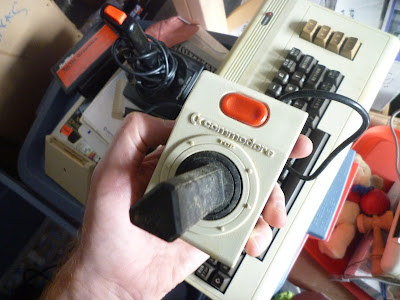 These are the cartridge games I had.  All of them except Visible Solar System I played a lot. As you can tell, I liked space themed shooting games as a kid.  I wish they had made a Famicom version of Gorf, that was an awesome game. 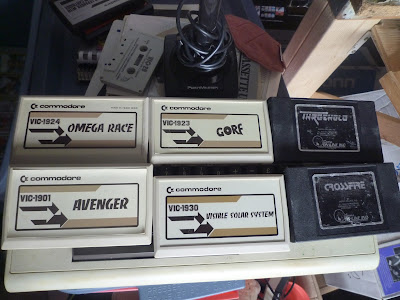 Still had the manual for Avenger in the box, its basically Space Invaders. 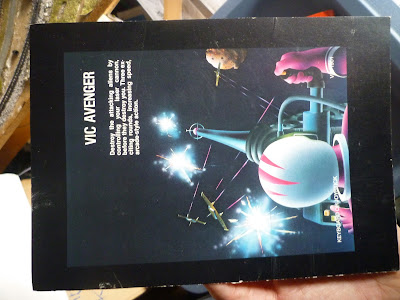 This was our cassette tape software.  $99.95 for 6 cassette tapes.  In 1982 Canadian dollars that represented a fairly major family purchase.  I didn't play these as much as the cartridges since they took longer to load, but I remember having fun with some of these. 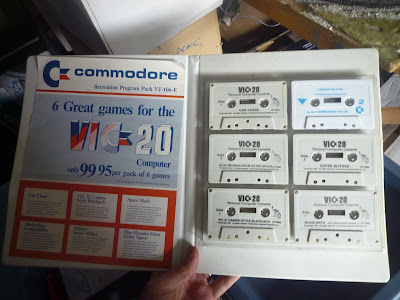 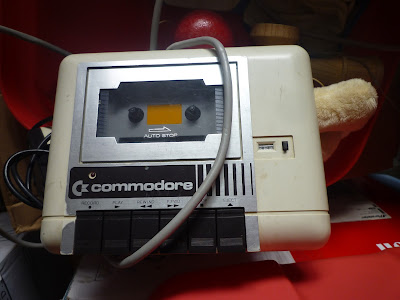 I also found in the box a pile of floppy disk games for the Apple IIC, the computer that eventually replaced the Vic-20 as our official family computer in about 1987 or thereabouts.  While I had saved the software for it, the Apple IIC itself is no longer around, probably a victim of its own bulkiness.

I'd like to say that I was able to hook these up and play with them but I unfortunately didn't have time.  Nor did I have space in my luggage to bring them back to Japan with me.  I can at least say, however, that they are still safe.  After some negotiation with my parents I was able to secure the continued use of some storage space in their garage for the indefinite future (in exchange for my agreement to get rid of a lot of other stuff: sorry baseball card collection and all of my old books).  So they remain in Canada, awaiting my return.  Someday I shall return for you, childhood video game collection, and we shall play together again, probably when my son is old enough and my apartment big enough to house you.