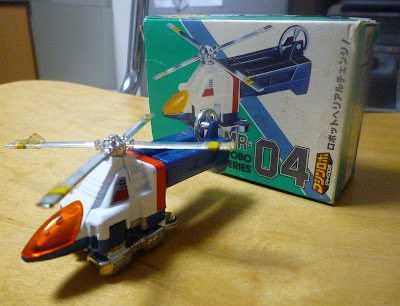 As promised in my previous post, this is what I got at the Shingu Omocha Souko yesterday: Machine Robo Series MR-04 Gyro Robo, better known in North America as the Blue and White Gobots helicopter (Cop-Tur).

I had this guy, or at least the North American version of him, way back when. He was a present from my Dad. I had about 7 or 8 Gobots, all of them the little ones like this guy and not the bigger, Transformer-esque ones. They are all long gone now, given away or sold off just before a family move in 1989.

The Machine-Robo series, of which this guy was one of the first, were first produced by a company called Popy, a subsidiary of Bandai. They were released in 1982, two years before the Gobots came out in the US. According to Wikipedia this one belonged to what are known as the "600 series" as they retailed for 600 yen when first released, a fact confirmed by the original price tag still on this one: 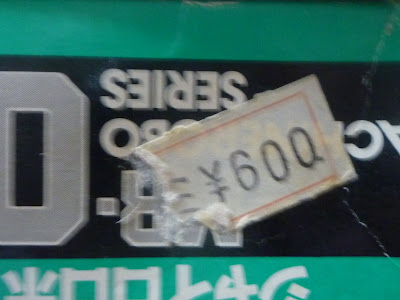 The thing came with this cool flyer with pictures of all the other Machine Robos released in the first series, most of which you'll probably recognize if, like me, you had Gobots when you were a kid in the early 80s:

One interesting fact that this thing reveals is that all the early Machine Robos (and hence, Gobots) were based on ideas sent in by little kids. My MR-04 Gyro Robo, according to this, was based on an idea submitted by an 8 year old from right here in Fukuoka prefecture.

Anyway, I really like this guy. The box is really great: 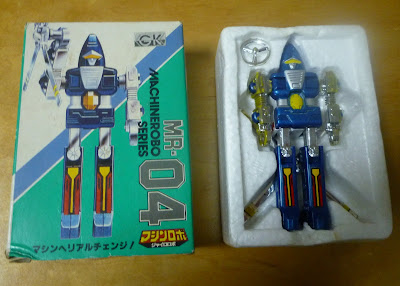 If I recall correctly the Gobots I had as a kid all came packaged on cards like action figures. Boxes like this are way better, they look nicer and they don't get permanently messed up when you open them up.

As I alluded to earlier, he turns from a helicopter: 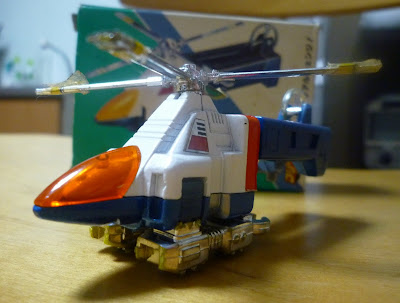 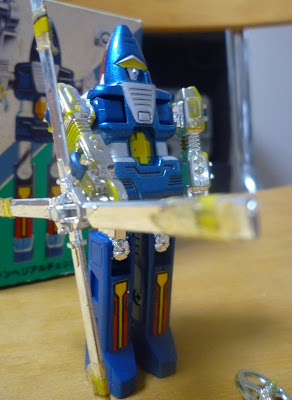 Doing a little internet research on this, I noticed that a lot of people think the Transformers are much better than the Gobots because they were more complicated, etc. I rather think the opposite holds true. The simplicity of this almost 30 year old toy really gives it way more appeal than most of the Transformers IMHO, especially these endless new ones that are just way too complicated and detailed.

Of course I am speaking as someone who found the first Transformers movie so awful that I wouldn't watch the second and third ones if you paid me to. Other opinions will vary. For me though, I like this little old Gobot.
Posted by Sean at 3:37 PM