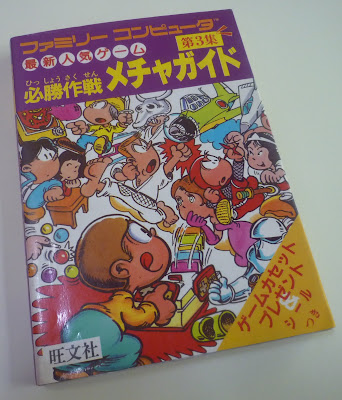 I picked up a rather interesting book at Mandarake the other day. Everybody, meet the Hishousakusen Mecha Guide.

This was an interesting guide book, one of many released for the Famicom in the 1980s. This was the third in this series and was published in 1985, 2 years after the Famicom's release and at the height of the Famicom boom.

It has strategy guides for 13 Famicom games - see if you can guess which ones by looking at the artwork on the cover.

Back in the day these guidebooks probably weren't worth the cover price (580 yen). Unless you had all 13 games you would be getting a lot of useless information. Plus for the most part the mini strategy guides just contain info that can be found in the manuals the games came with.

As a repository of Famicom history though this thing is fantastic. Most of its value lies not in the guides to the games, but in the added bonus features that crop up here and there. Today I thought I would do a post about one of these: High scores.

On page 158 this book has a list of high scores which readers of the series have achieved on some of the more popular Famicom games of the time: 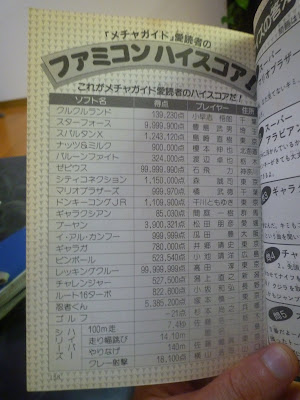 I find this sort of thing very interesting, so I've translated the list below. The only difference between this and the Japanese original is that I've omitted the names of the hi-scorers to respect their privacy and I've also omitted the Hyper Series scores at the bottom which would have been a pain in the ass to fit into the table. Here they are:


Ever gotten scores better than these? These look pretty good to me. The scores for Star Force, Xevious, Yie Ar Kung Fu and Wrecking Crew obviously represent the highest scores possible. The only one I've come close to besting is Galaxian, all the others are way out of my league. But then I suck at video games.

Anyway, I really like this because it reminds me of an earlier age of video games. You ever notice how the high score feature was slowly eliminated from most video games in a process that began during the Famicom's generation? It seemed that by the time the Nintendo 64 rolled by score keeping had been eliminated from all but a handful of games.

In the old days though, pretty much all games revolved around racking up high scores. The purpose was just to get as many points as you could. This was a really brilliant feature of them. The high score provided the perfect measure of one's skill when compared with other players. It gave you something to focus on while playing the game and provided an added level of intensity as it made everything in the game important. Miss shooting down a single space ship and that represented points lost.

Even in games where the main purpose wasn't getting a high score per se the presence of the score feature provided another element of interest. Like in Super Mario Brothers the purpose wasn't really to get points, it was to get to the end of level 8-4. But once you had finished every stage, instead of tossing the game aside you could start again from the beginning with a new mission: using score rather than levels completed as the measure of success. To a certain extent the fact that you could rack up huge points by just endlessly bouncing turtles off of walls limited the enjoyment of this but you get the point.

High scores: I salute you!