The Year You Stopped Being a Kid 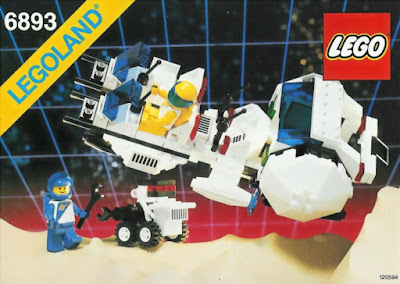 We had a great Christmas holiday at my house.  It was a Lego themed one for my son, who is now massively into all things Lego as I was at his age.

Having a kid who is now old enough to play with regular toys has of course gotten me into those toys as well, particularly Lego this year.  In getting his presents ready I re-immersed myself in a toy world that I hadn't really connected with in decades.  It was great.  In addition to hunting sets that I thought he would like (the Arctic Explorer series was his favorite this year) and building them with him, I also spent hours online looking through the comprehensive listings of Lego sets on Brickset.

It was great nostalgic fun, going through the sets I had as a child.  Starting with the Classic Space sets I got around 1980 or 1981, then looking at the Castle sets I got in the mid 1980s, and all the sets in between, year by year.  It was all familiar, even the sets I never owned I recognized since I remember spending a lot of time looking at the catalogues and toy store shelves back then for stuff I wanted but ultimately never received!

Then as I went through year by year I found the cliff.  The chronological moment at which I instantly went from having 100% master knowledge of every minute detail of every toy, to knowing absolutely zero about anything I was looking at.

In the Brickset Lego list, browsing them chronologically I realized that the Orion II Hyperspace Set pictured above was the last Lego set I could remember.  I think I was given it as a birthday present that year, in which I turned 11.  Every Lego set on the list before that I remember.  Every Lego set after it is Greek to me: I couldn't distinguish a Lego set released in 1988 from one released in 2008 ( my entire childhood Lego collection was secretly disposed of by my mom in 1993 incidentally, I've never totally forgiven her for that).

Its the same across other toylines that I had been into as a kid whose release lifespan crosses that event horizon.  I know every G.I. Joe released before 1987 and none after.  I know every Transformer released before 1987, but none after.  And so on and so forth.  Without these easily searchable online databases of vintage toys I probably wouldn't have been able to remember exactly when I got out of toys, but their existence makes this possible, which is kind of neat.

Some other toy lines I have complete knowledge of because their releases occurred entirely before 1987.  So I am familiar with all the original Star Wars toys and all the Gobots for example.  Masters of the Universe too (I think).

This kind of makes sense.  11 years old is about when the typical kid grows out of toys.  Its just kind of interesting as an adult to discover these radical points of departure in your memory where everything just suddenly stops.

1987 was a bloodbath for my toy interests, but not for everything.  My video game knowledge crossed that year without much change.  My video game knowledge is really patchy and has a few spikes.   In the early 1980s I had a Commodore Vic 20 and I remember a lot about the games available for it.  In the late 1980s I had an Apple IIC and my knowledge of games for it before and after 1987 is pretty much the same.  In 1989 I got my NES and I have a pretty solid memory of the games from the period about 1989-1992 for that one, after which I kind of got tired of the system and my video game knowledge enters its dark ages.  I never got an SNES so that entire generation is just an empty slate (discounting what I've learned about it since getting my first Super Famicom back in 2009).  Then in 1998 when I was in my early 20s my room mate got a Nintendo 64 and my video game knowledge experiences a renaissance.

Comic books and baseball cards also survived the 1987 barrier for me, I guess because it was socially acceptable for teenagers to like those things.

This knowledge creates a new year for me to not really look forward to: 2025.  My son will turn 11 that year and stop being a kid like I did back in 1987.  So I only have a few more birthdays and Christmases to give him toys that will light him up like he did this year and like I did back in the 80s. I'll have to make them count!

So anyway, looking at online toy databases, what year did you all stop being kids in?  Anybody else in the class of 1987 out there?