More than half way there now

June is a busy month for me so I haven't posted in about 6 weeks now. I have however continued to amass Famicom games and recently passed the "official" halfway mark of 526 games (ie halfway to collecting all 1051).

I picked up a lot of games at "GEO" recently. GEO is a big nationwide chain that (I think) started out as a video rental chain but expanded into related lines of business like CDs and, of course, video games. There are a few locations in my area and I've gotten a few of my games there, including "Afterburner" (not sure why that piece of useless minutia stuck in my mind but there you have it).

Anyway, a few months ago all the GEOs put up signs saying they were no longer buying Famicom/SuperFamicom/N64 games (as well as other maker's games from those generations) and marked down their existing stock 50%. That spurred me to pick up a few. Last week though they reduced everything they have left even further, which sent me on a bargain-bin search expedition tour around all the local GEOs looking for games I need. These are some of the ones I got:

I paid quite a bit less than the sticker prices for these. 100 yen each to be exact.

I'm kind of sad to see that GEO is going out of the Famicom business. Their prices were a bit on the high side (before they marked everything down of course) but most of their outlets had a pretty good selection. I also liked the stickers they put on the games, like these ones on Super Contra (good find there): 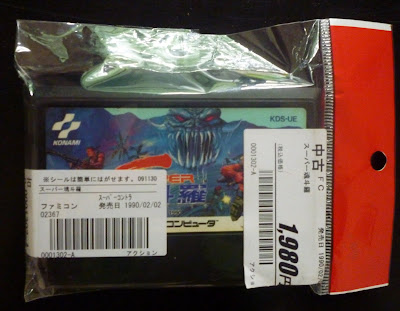 In Japanese its got all the information you need. Name of the game, genre, the date on which it was originally released, etc. Most places just put the price and nothing else. 1980 yen is a bit high (though still in the ballpark compared to the competition). I also liked the fact that that they used the stickers that easily peel off. I hate the shops (ie Hard Off) that put stickers directly on the carts which are a massive pain in the ass to remove. GEO got that part of the business right. OK, I know this is anal retentive minor stuff, but I'm still going to miss those GEO labels when they stop selling them altogether!
Posted by Sean at 4:00 PM No comments: