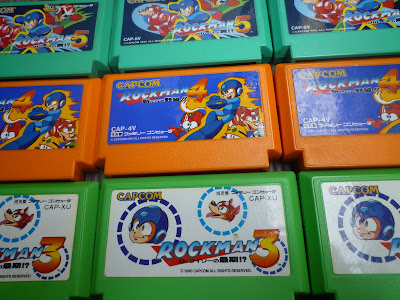 This will probably be the final post in this series on Famicom related slang. I haven't done the whole list but its taking a fair bit of time. I might do some more at a later date.

For the last entry I thought I'd go for some of the Rockman slang, as that is a relatively popular one. These aren't all of the Rockman related phrases contained on Tata Hitori Famicom no Shonen's dictionary (from which all the terms in this series are drawn). I'm embarrassed to admit that I suck at Rockman and as a result don't play it much, so the meaning of some of the phrases were a bit beyond me due to my lack of familiarity with the games. I invite anyone out there to translate the other ones!

Here are the ones that I did understand:


岩男 (Iwao) - The Japanization of "Rockman", made using the characters for "Rock" and "Man".

カプコン的 - (Capcomteki) - Used to describe games that are similar in gameplay to Rockman. Literally means "Capcom-like".

金玉 でか金 (Kintama/ DekaKin) - the names of the power-ups in Rockman (small power up/ big power up). Literally these are Japanese slang for (ahem) testicles.

しらふで勝つ (Shirafu de katsu) - To beat a boss in any game in the Rockman series without using any special weapons. Drinking an energy can invalidates a Shirafu de katsu.

スライム (suraimu - slime?) - In Rockman 2 to avoid the enemy's shots by repetitively pushing the start button (not sure how that works).

ターターブロック （tata block) - The flashing blocks that appear in Rockman (named after the sound they make).

DIO様 (DIO sama) - refers to Flashman in Rockman 2 and Brightman in Rockman 4. It is a reference to something called "Manga Jo Jo" - I don't know what that is though!

ヘルメットおじさん (Helmet Ojisan) - A nickname for the little enemies that wear helmets.

ボスハンター (Boss Hunter) - A person who is really good at beating the boss in games like Rockman or Akumajo.