Freakonomics: How to Enjoy an Endless Supply of Free Retro Games and Consoles 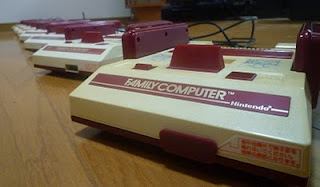 If you were to walk into an average store selling used game stuff today, you can buy that same Play Station 2 for 7,000 yen, about 1/4 what it cost in 2002 (and about 1/5 the cost when it was first released).  You basically paid 20,000 yen that is completely unrecoverable.  In economic terms that money could be described as the amount you paid to enjoy the console over the course of the decade while it was new - a kind of `rent` if you will.

That is a pretty standard rate of depreciation.  If you buy a car or TV new it will also experience a precipitous drop in value starting the second you purchase it.

One of the economic benefits of purchasing retro game stuff is that unlike new stuff the thing`s value doesn`t immediately start going down like that after you buy it.  Its value has already depcreciated as much as it is likely to (though maybe the PS2 still has a bit more depreciation left in it).

If today you were to buy, for example, a complete Famicom system for 40$, assuming you don`t break it in the interim, it will probably still be worth 40$ five years from now.  Maybe more if you are lucky.

If you consider the implication of this fact it creates a rather exciting opportunity for retro gamers - the possibility of an endless supply of free consoles and games.  Let me demonstrate below how this could be done.

The availability of Ebay and buy/sell/trade sections on retro game forums creates a market in which it is pretty easy to sell retro games and consoles to other enthusiasts providing you charge a reasonable price for them.

So lets say you have 100$ and you want a Famicom and some games.  No problem, there are a lot of people who will sell that to you on Ebay or any one of a number of forums.  You get them, play them, enjoy them for a couple of years.

At the end of that you decide to sell them.  And you can because these forums exist.  Because there was no depreciation and assuming you were smart and paid a reasonable price for them you can probably sell them for the same 100$ you paid for them, maybe even a bit more.  You can then use that money to buy your next console - say the Super Famicom or something. Again you pay 100$, play the games for a few years and then sell them for the same amount.

And you just repeat the process until you decide you no longer want to play retro video games anymore, at which point you sell whatever console and games you are left with and recover your 100$ - leaving you with the exact same amount you started with.

With the exception of shipping charges at the end of the day you have gotten years and years worth of retro gaming for free. If you were a particularly good wheeler and dealer who turned a profit of 10% or so on each transaction, you could probably eliminate even the shipping costs as an expense.

I use 100$ just as an example, you could start with 500$ if you wanted to get some rare system or to get a lot of games, the beauty part is that it doesn`t matter because at the end of the day you could still recover everything and not be out a dime.

All of this, of course, is predicated on a few assumptions that might not work out in actual experience.  It assumes you don`t overpay for anything, which might not happen.  Fortunately though even if you do overpay for one thing, if you are constantly engaged in transactions over the course of several years you will probably also underpay for other things, so the two should cancel each other out.  And of course this idea will only work if you don`t break anything that can`t be repaired - so be careful with those consoles!

It also assumes that you are able to resist the urge to become a collector who wants to keep everything, which (as I know from personal experience) is very difficult to do :)