Famicoming on a Rainy Day 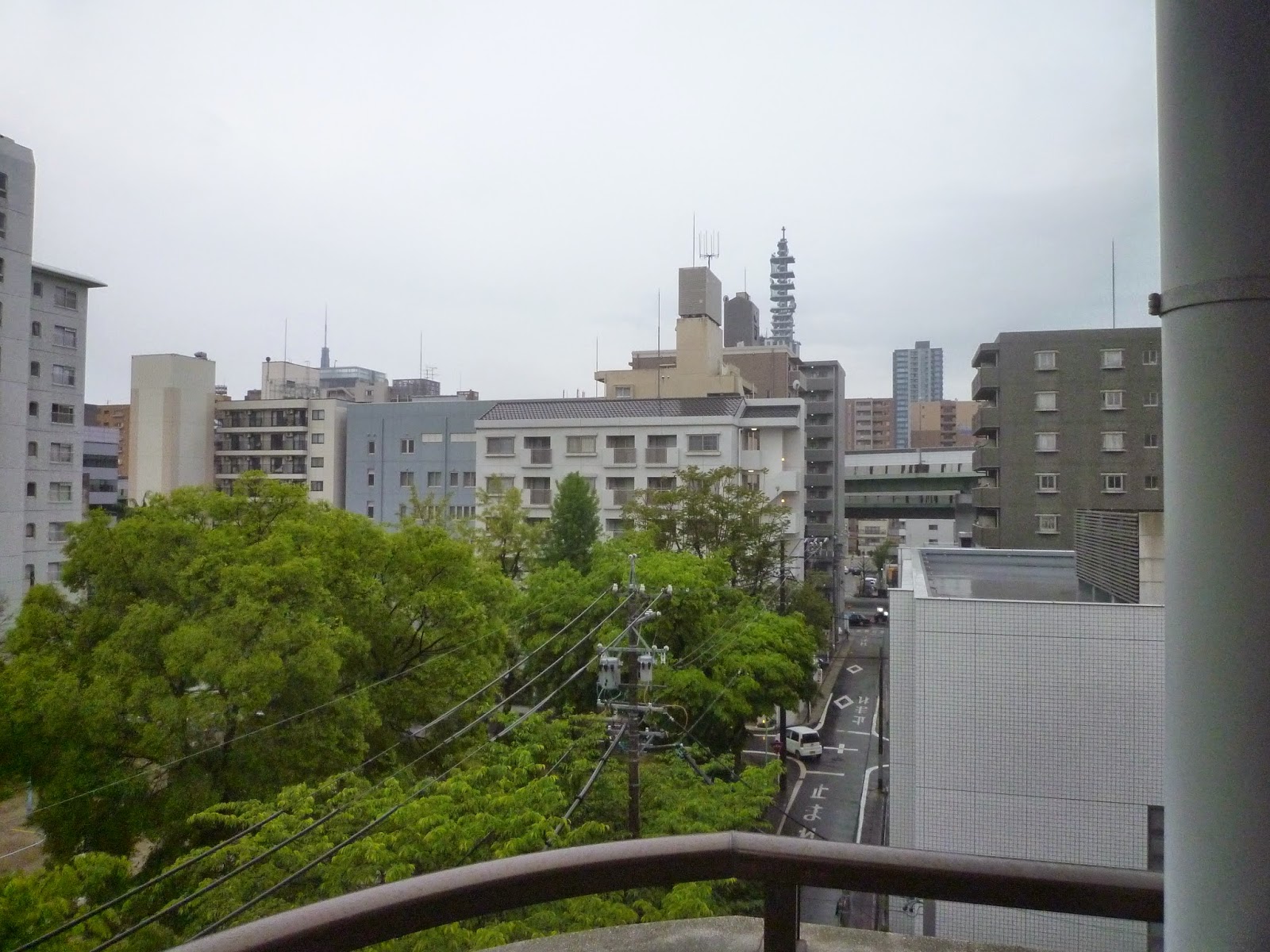 Today is a national holiday that awkwardly falls on a Tuesday.  It has been raining cats and dogs since last night.  With a Famicom firmly installed in our living room, however, we are well prepared to wile away the afternoon warm and dry indoors. 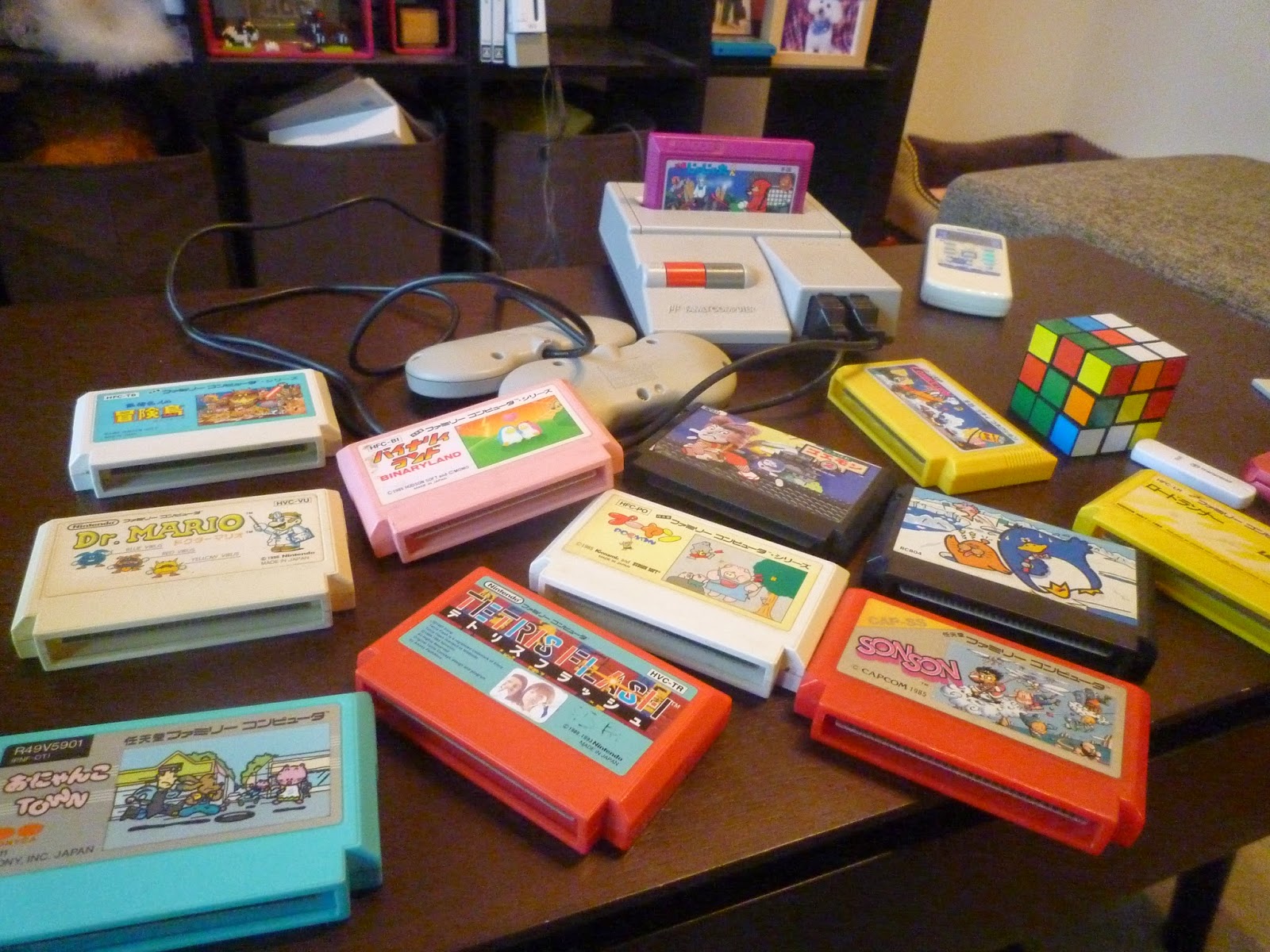 They key to enjoying a rainy afternoon playing Famicom with your better half is game selection.  I grabbed a dozen promising titles, pictured above, each carefully selected based on the fact that we both like playing it.

Then Binary Land.  We take turns on that one, alternating with each level cleared.  We make it about 9 levels before we run out of lives.

Onyanko Town:  my wife is a million times better at that game than I am.  She makes it to level 3 our first try while I am stuck running around looking for the kitten on the first level.  I like that game a lot, but I suck at it.

Ninja JaJa Maru Kun:  I forgot how much I liked that game.  The music is one of my favorite 8-bit tunes.  We both do pretty well.

Tetris Flash: Safely back in my territory I take 3 straight before we decide to move on.

Poo-Yan: another classic, but it is so frustrating when the wolves deflect your arrows.

The rest of the games will be played tonight.  We are taking a break now while my wife gets dinner ready, which is really awesome of her.  Adventure Island and Antarctic Adventure are two I am eagerly looking forward to.
Posted by Sean at 6:00 PM 10 comments:

What Kinds of Companies Go on to Make Video Game Consoles? 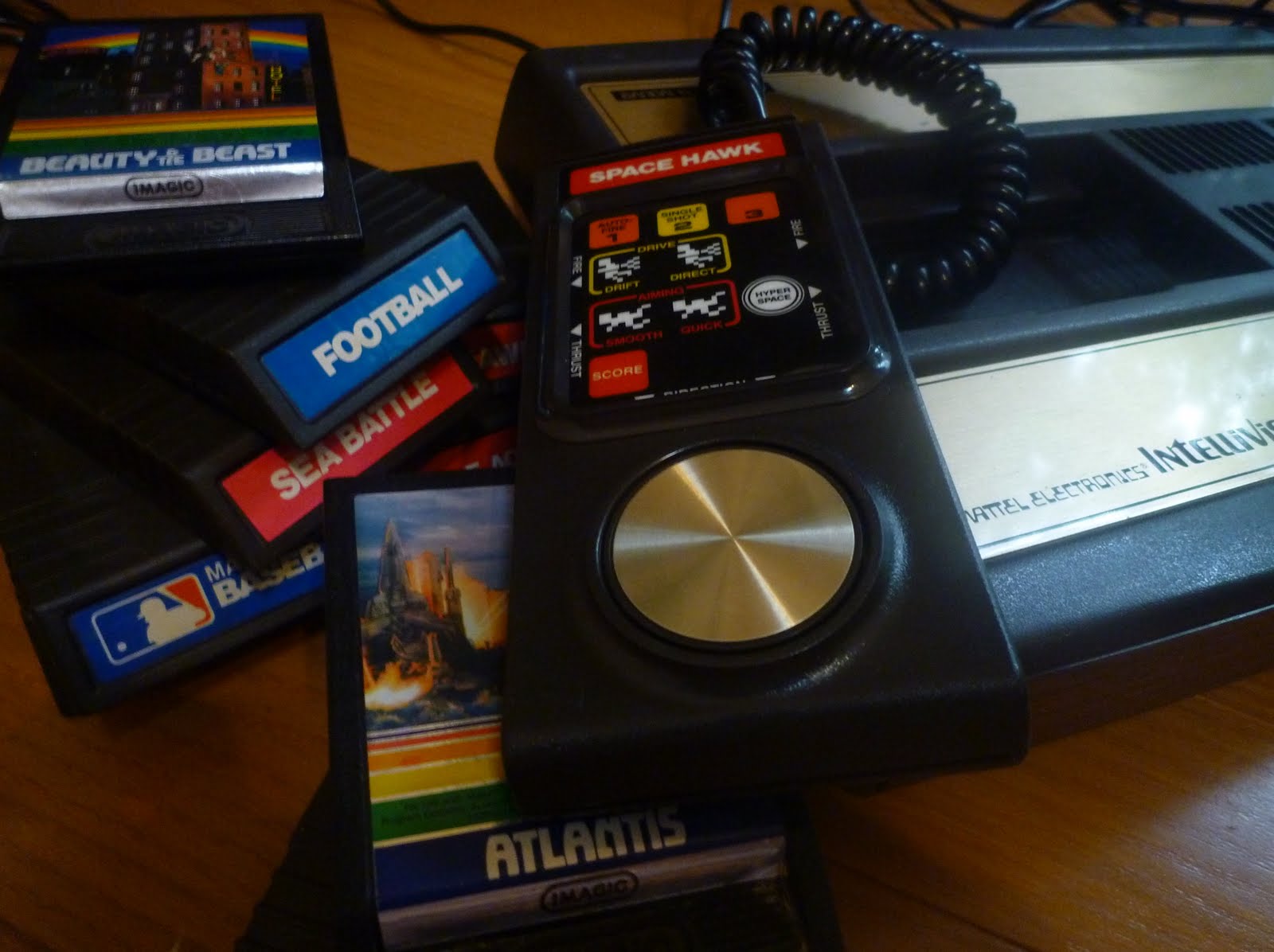 Yesterday I had a bit of time and a random thought on my mind: what kind of company makes a video game console?

It occurred to me that this might be a somewhat interesting way of approaching video game history.  So I thought I would put together a list of every company that has produced and marketed a video game console to see what it was they did before they made consoles.

It might seem an odd question, but it is also an interesting one.  A company is an amalgamation of people supplying labor, money, management expertise and other skills to a business venture.  In the case of video game consoles, its kind of interesting to ask what those companies which decided to make a console were doing before they made that decision.  Were some types of companies more likely to make a video game console than others?  Do certain types of companies make better consoles that succeed on the market?  How did that change from generation to generation?

So I put together the following tables, which trace the history of video game consoles from the 1st generation to the seventh.   I didn`t include the eighth because it is still new and we don`t yet know what else might get released this generation. Basically if a company released a console for the first time in a given generation it gets listed, along with the industry that the company was originally involved in.  I didn`t list the company a second time if it released a second console (so for example Sony appears in generation five, but not in six, etc).  I excluded dedicated systems from the list, which means there weren`t many from the first gen (which I combine with the second gen in the tables). I also excluded consoles that were cancelled before release. The tables reveal a few interesting things.  Here they are in order:


There are a few interesting things we learn from these tables.

The first is that a lot of toy manufacturers - Mattel, Bandai, Entex, Worlds of Wonder - entered the console market in the first to third generations, but from generation four (Super Famicom/Mega Drive) they completely stopped entering the console market.  I guess this may be a result of the increasingly complicated nature of consoles.  In the early generations the types of skills that companies had for making toys were probably more easy to transfer to the making of simple video game systems, but as the technology progressed it became harder for them to make that leap and they just stopped trying.

The second is that, relatively speaking, not many of these companies began life in the video game world.  Atari is one of the few, having been founded specifically to make video games.  After that there are a smattering of other companies founded by former employees of console makers or companies that were in closely related fields like arcade games - Smith Engineering (Vectrex), Vtech, Konix, SNK and Zapit.

There are also a few really oddball origins for some of these companies.  Casio, which released the PV-1000 in the third generation, started off as a maker of smoking pipes in postwar Japan before moving into the field of calculators and other electronics it is more famous for.  Coleco, which made one of the most popular consoles of the second generation, got its start in the early 20th century producing leather goods.  Sega started off as a jukebox maker, which I think is pretty cool.  And suprisingly not one but two companies on the list - Philips and Panasonic - got their start as lamp makers in the early 20th century.

Other than that most of the industries are relatively unsurprising - electronics or computer related items make up a lot of the list.  That makes sense given the transferability of skills and expertise between those and the making of a video game console.

Another thing worth noting is the sudden drop off in new entrants after the fifth generation.  The sixth generation is an interesting one - according to this Wikipedia list there were actually a large number of companies planning to enter the console market that generation but most of them were cancelled before release.  The seventh generation had a few entrants with Famiclone type consoles, but I didn`t include them on the list since those aren`t serious competitors in a generation`s console market.

The rapid drop off might be an indication that the console market got a lot tougher to enter after the fifth generation. Unsurprisingly each generation since then has been dominated by the exact same big three - Nintendo, Sony and Microsoft.  That marks the longest run in console war history that you had effectively the same list of big competitors dominating - the Sega/Nintendo/Sony console war lasted only two generations (though the Sega/Nintendo console war lasted a generation longer, but with NEC as the main competitor in the 3rd gen).  The sixth generation was also the last generation in which a new entrant (Microsoft) was able to become a major competitor.

Anyway, those are just a few thoughts about what this tells us.  In terms of the current generation the big three all come from widely differing areas.  Nintendo started as a playing card maker, then transitioned into toys before making consoles.  It is the last of the toy makers from the early generations to still be in the business.  Sony for its part was one of a relatively large number of consumer electronics makers in the 3rd -5th generations to try making consoles.  Microsoft is...well, its Microsoft.
Posted by Sean at 12:52 PM 6 comments: