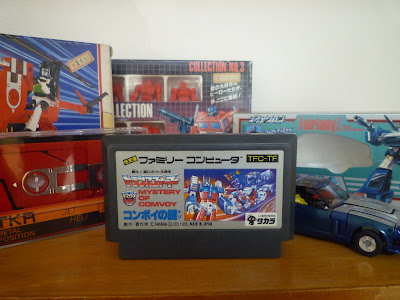 In keeping with my recent fascination with 80s robot toys from my childhood, I thought I'd do a post here about one of the worst games ever released for the Famicom: Transformers Mystery of Comvoy.

The awfulness of this thing is legendary. It is only slightly better than turning on a cart-less Famicom and trying to use the controller to make the gray screen do something. The first sign you get that this game was probably rushed through production is the fact that nobody caught the obvious spelling error in the game's English title. This type of thing is a pretty common occurrence in Japan, though it is rare to see such a flagrant mistake on a product made by a big company like this. Always pays to have a native speaker double check these things, I always say.

I'm not sure that the gameplay on this thing is even worth reviewing. The guys at 1Up have already done t a good job of it here. Having played this stinker and not gotten past the first level I can vouch for it being every bit as frustrating as they say. I think I'll just comment on one element that really illustrates the bad-ness. It is a horizontal shooter. Among other things, enemy tanks come at you. But your character's gun, which only shoots straight, is actually too high to hit the tanks. It is physically impossible to actually shoot the enemy with your gun. Your character just continuously points his gun too high to hit them and all you can do is watch in anger as each shot flies harmlessly over the enemy tanks. That is how poorly designed the thing is.

In the game's defence though, its awfulness means that it is probably one of the cheapest vintage 80s Transformers toys out there. You can get these for 300 yen (3$) or less pretty easily. Its a boring gray cart, but I do like the label art. Very Transformer-y. So if you like old Transformers stuff, or infamously bad video games, then its kind of a neat thing to have.

To change gears here a bit, I'd like to put in a word about the Japanese origins of the Transfomers toyline. Why? Because I'm very keen on the things and its my blog. So there.

The original Transformers are descended from a couple of Japanese toylines produced by Takara, the same company that made this game. Most of the original Autobots are basically copies of an early 80s toyline known as Diaclone. I have one of these, the Fairlady Z Car Robot: 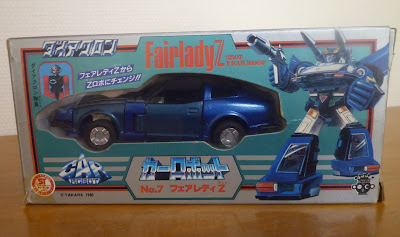 This is without a doubt my favorite toy. It actually looks kind of....classy. The name "Fairlady Z" is really cool, and the sleak lines of the car are pretty smoove: 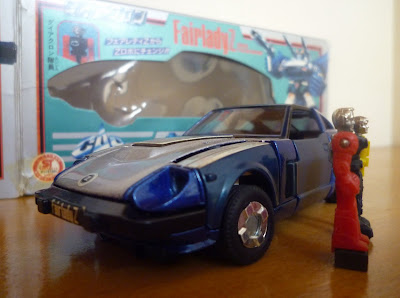 Note the two little human figures in the above photo. Unlike Transformers, Diaclones were not supposed to be sentient robots but had human drivers. Each of these toys came with one such figure. Somebody had accidentally put a second one in the box of mine when I got it, which was a nice bonus.

The box is pretty sweet too, Transformers fans might recognize some other first generation Transformers on there: 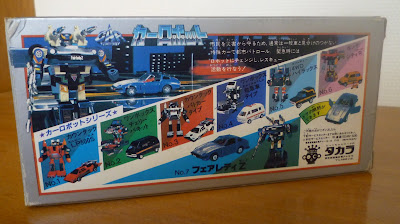 The bottom has a nice cut-away image of the car:

All the bits and pieces: 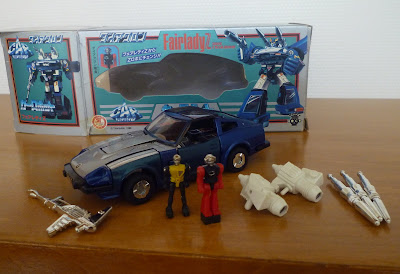 Not only is this my favorite toy, it is also far and away the most expensive retro thing I have ever purchased. These things are insanely hard to find, especially complete in their original boxes like this. Just the little human figures retail for about 50 dollars each (so getting an extra one was a real bonus). I'm embarrassed to admit how much I paid, but lets just say it was in the five figures.

That is 5 figures in yen, not dollars. I didn't spend THAT much on it. Still, it was enough to cause me to hyperventilate on leaving the store and then spend about 14 hours curled up in the fetal position full of self-loathing for having turned into one of those guys who spends ridiculous amounts of money on trophies like this.

The other toy series that Transformers are descended from is called Microman. Most of the original Decepticons come from this series. I have one of them, a cassette that turns into a helicopter: I love this thing because it is the exact same size and shape as a regular cassette and comes with its own regular cassette tape box. The helicopter isn't quite as impressive. Like the Diaclones, these came with human figures. 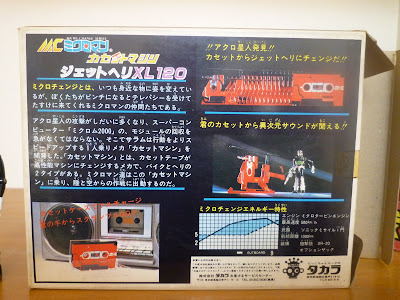 I really dig the back of the box. The photo on the lower left demonstrates that it is, in fact, capable of being put into a regular tape player. the little energy chart on the lower right also looks like a crude predecessor to the ones they put on the back of Transformers boxes.

My "Microman Cassette Machine" doesn't actually have a Transformer equivalent, though some of the other cassettes from the same series ended up as the cassettes that went with Soundwave in the original toyline. Because this one turned into a helicopter rather than a robot (or some other sentient being) I guess they decided he wouldn't work as a Transformer. For that reason he is way cheaper than the ones that did become Transformers and I got this thing mint in its box for only 6000 yen (about 70$).

As a side note, the Microman series actually spawned two toy franchises in North America. In addition to the Transformers, they were also the basis for the Micronauts who came out in the late 70s. I used to read the Marvel Micronauts comics as a kid so these are kind of double-retro to me!