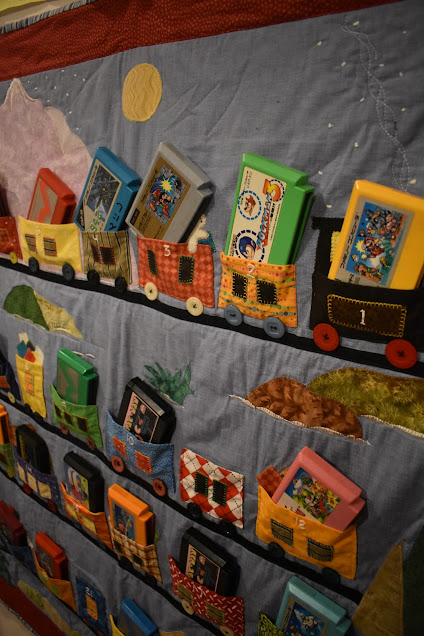 I had this idea last night that I played around with after the kids had gone to bed.

We have this big advent calendar that my mom made for us after my son was born.  It hangs on the wall in our living room and has little candies in it.  I was absent mindedly staring at it when it occurred to me that most of the pockets would be the right size to hold Famicom carts.  So I took the candies out and put my son's Famicom carts in. 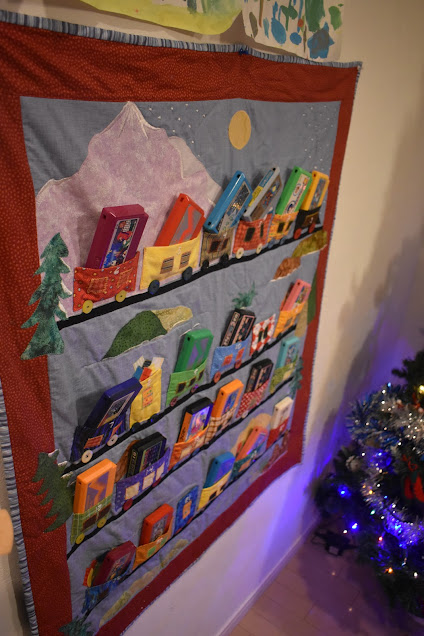 This was just a test run and I have no plans on ever doing anything like this, but I thought this would be a pretty cool thing for a retro gamer to do.  Especially if you are like a retro gaming couple who live together without kids this'd be an awesome way to do advent calendars - playing a game each day throughout December. 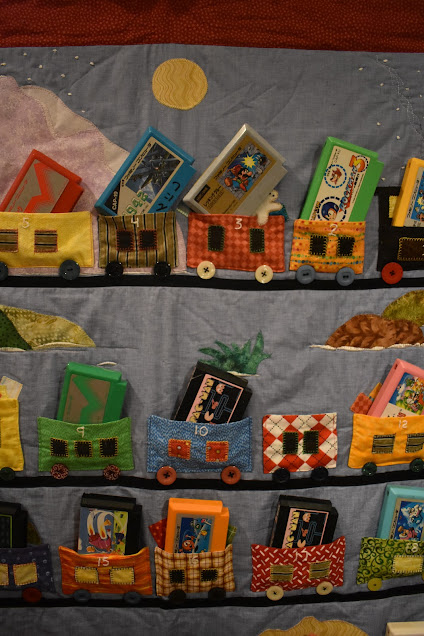 I'm not in that category of person, so this advent calendar was retro-gamified for demonstration purposes only, and currently has reverted to holding just candy.  But I thought I'd put the idea out there in case it hasn't already been floating out on the internet since like 2007 or something and I just didn't notice!

The End is Near: Planning for our first, and last, Retro Game Christmas 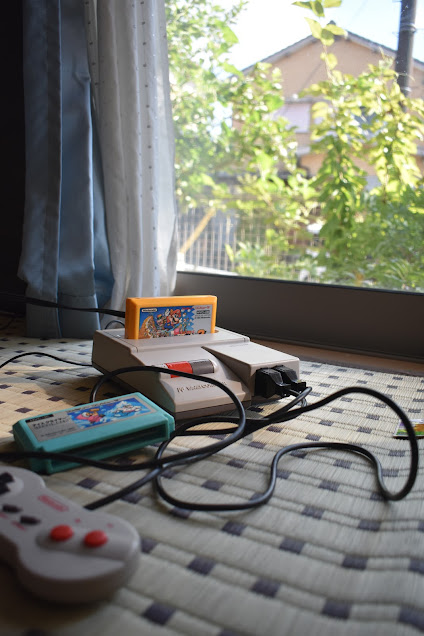 As I've documented in a few posts this year, 2020 has been the year of the Famicom in my house.   I gave my AV Famicom to my son back in April and we've played it together almost every day since.  I've gradually increased his game library with little presents here and there for good behavior and he has about 30 now.  That only represents less than 5% of my own collection, but its a pretty impressive collection for a 6 year old.

I feel very bad though because I am about to do something terrible to his Famicom interest that I've spent the better part of this year nurturing.

I'm going to kill it.

For Christmas this year I'm going to give him a Super Famicom, along with a few games (Super Mario World, Super Mario Collection, Mario Kart, Yoshi's Island and Donkey Kong Country).

I've been putting off the day I would give him a newer console (albeit one that is itself 30 years old!) for months now because I know that once I do it'll be the only thing he wants to play and the Famicom will fall to the wayside, never again to be the centre of his attention like it is now.

But the writing is on the wall and I've dragged this out about as far as I can.  He is very aware of the fact that newer consoles exist and has been bugging me for months to get one where the images don't look like "Lego" (his way of describing 8 bit graphics).

So the Super Famicom, with its 16 bit graphics, is going to be his.  Likely its reign will also be short lived.  He is going to start Elementary School soon and peer pressure there will undoubtedly result in him wanting a Nintendo Switch (or some other contemporary gaming system) by Christmas of 2021.

So Christmas of 2020 provides the only window of opportunity for me to make retro games a significant highlight of his gifts - and for them to be happily received by him.  A Super Famicom, or any other retro console, is not likely to be well received as a Christmas present a year from now.  So I've got to jump at the chance, even though it sadly means killing off his Famicom interest.

Being a retro gamer dad is complicated work. And I'm not even getting into the minefield of planning his little sister's presents in this post, which is an even bigger issue.

The Super Famicom won't be his only present, he's also getting a boatload of Mario Lego sets and a few other things, all of which are related to the Famicom (because that is what he wants!)  Its a huge difference from Christmas of 2019 which was dominated by dinosaur related presents.  I've felt pretty bad for the past few months as his interest in dinosaurs (which was INTENSE for a couple years there) was completely displaced by his interest in Mario stuff. I miss reading dinosaur books and playing with toy dinosaurs with him. But I've also really enjoyed playing the Famicom with him this year and so feel a little sad that it'll be coming to an end soon.

On the plus side though, I've given him a year of exposure to the Famicom during a very formative period of his life and I think 40 or 50 years from now he'll probably look back on these days with fondness and have an intense nostalgic connection to a little console that is 30 years older than he is!