Emulation Schmemulation: 5 Reasons You Should Own an Old Console 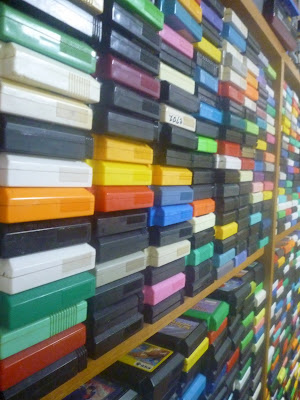 Hey look! My first blog post that is a list of something! Another milestone here at Famicomblog.

My main purpose here (despite the somewhat inflammatory title) isn't to criticize emulators. I actually think they are great and have a lot of respect for the early pioneers who reverse engineered the games back in the day. And I get the attraction. Playing a game on a PC is just insanely convenient. The games are easily accessible, instantly playable and you don’t have to devote a huge chunk of your realty to the storage of tons of old cartridges and consoles. Perfectly reasonable. Switching to emulators to play retro games has even been linked to a 90% reduction in “tripping-over-massive-entanglement-of-console-wires” related injuries in retro gamer living rooms. Probably.

That said, I never play retro games on my PC. Its not a trend that I view favorably as I like to think of "retro-gaming" as a hobby that is about more than just playing the games themselves. Emulators can't emulate all that other stuff. Here I’m going to make my case by showing five things that Emulators can't provide but consoles can.

1. The Thrill of the Hunt 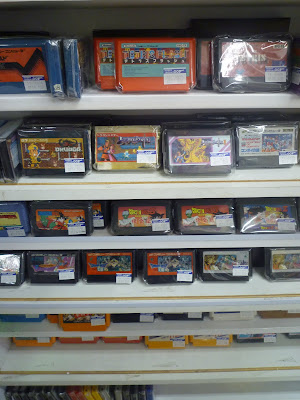 Ironically, having to go out and buy something can actually be a fun experience in and of itself. Being able to download stuff on demand removes the thrill of the hunt from the experience. I’ve noticed this with things like music and movies that I used to procure at actual stores but no longer do. Going to rent a DVD or buy a CD was something that I probably enjoyed as much as actually watching the movie or listening to the album. Downloading is just way too easy and bland an activity for you to get anything out of it. My experience trying to track down this game is illustrative. When I first got my Famicom that was the game I wanted the most. It was my wife’s favorite game when she was a kid and I knew that buying it for her would put me in her good books. Only problem was that none of the video game shops in town had a copy of it. I ventured near and far looking for a copy of that game, spending god only knows how much time burying my nose in the junk bins, glass cases and racks of Fukuoka’s game stores. For 6 long months I toiled.

My quest was such as to achieve legendary proportions in the Fukuoka gaming community. Clerks at the video game shops in town would see me wandering the aisles. A new guy with a quizzical look on his acne-scarred face would ask “Why is that guy always here? I understand not the purpose of his constant visits.”

“That,” a grizzled veteran shop clerk would reply in a fatherly voice, “is Sean the Wanderer. He is not from this land, but hails from a distant kingdom. He is a man on a quest that brings with it much peril. He seeks a copy of Antarctic Adventure. Boxed if possible, but they say that he is flexible on that issue.”

Then, suddenly, it appeared one day. At 007, they put out a whole bunch of new games and Antarctic Adventure was one of them. My quest was at an end. Sean the Wanderer could finally rest.

Having to spend so much time looking for that game produced two positive results. The first was that I actually enjoyed looking for it. Spending your time looking through quirky stores searching for an obscure item is fun, at least to people like me. You actually get to interact with people and places rather than just sitting in front of a computer. The second was that when I finally got the game, I really appreciated it, and so did my wife. We got a bottle of wine and played that thing for hours, taking turns on each level. It was fun, and a great memory.

Now, if I had just gotten a copy of the game on our PC, it would have been fun for a few minutes and that would have been that. Having to go out and find it though gave me a good 6 months of...well, of something to do at least.

2. The Ritual of the Console

Ritual is an undervalued element of our modern society. We’ve pretty much done away with most of the formalities which used to dominate our lives. Undoubtedly this has been a good thing. I’m an informal kind of guy. I hate suits. But sometimes I do wish I had a bit more ritual in my life. I get some of that from the Famicom.

Thankfully I just so happen to possess a bunch of such consoles.

The ritual begins with the need to select a console on which to play. Lets go with the Famicom. Now I must first go through the ritual of getting all the right wires hooked up to the TV, as every time I use a different console I switch the wires around.

Then comes the taking out of the Famicom from its little shelf beneath the TV as the controller wires aren’t long enough to reach our sofa otherwise.

Next comes the selection of the cart, done at our lovely wall rack. 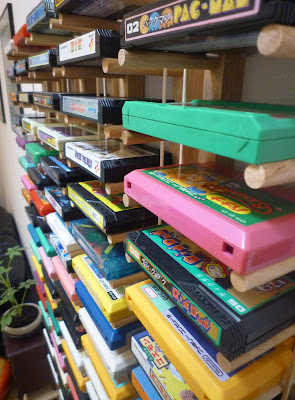 Then, the putting in of the cart and switching on of the console. 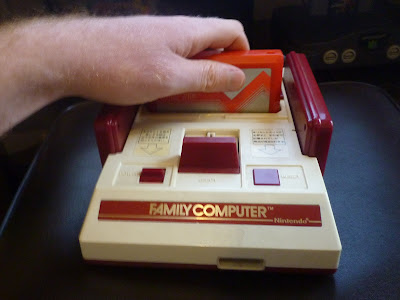 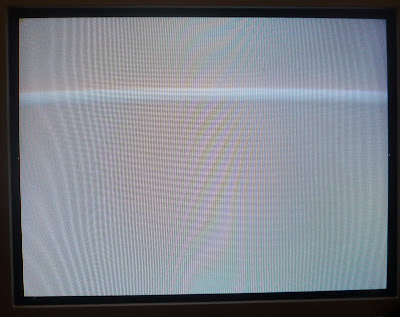 To wit: the removal of and blowing on the cart and then trying again. 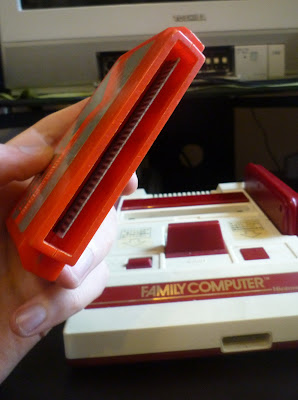 Enter: the phase of fidgeting with the cart to get it in just right. Not all the way in, but kind of like almost all the way in. No, more than that. Yeah, like all the way in but just pull back at the last second. 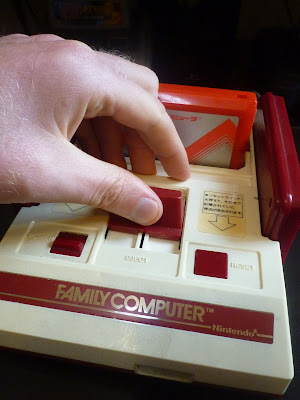 Swearing, threatening to throw the bloody console out the window. Calming down. Reassuring everyone that you’ve got it. No, really, you know what you are doing. Come on, I’ve got it. OK, go ahead then. Yeah, lets see you try it, smart-ass. Good luck with tha…. 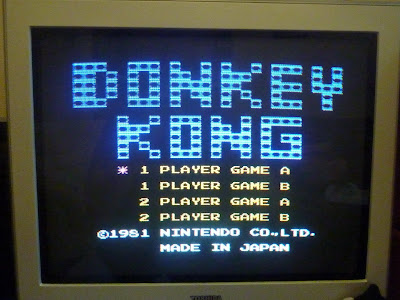 Anyway, the bottom line is that while the ritual described above is a huge pain in the ass, somehow it is a necessary ritual that heightens one's appreciation for the game. I think this is because it makes the activity of playing the game much more than the simple playing of the actual game itself. Having to go through all of this is part of the experience. Being able to play the game right away, while convenient, removes all of these ritual elements from the experience. You are just playing the game and nothing else.

3. The tactile feel of the real deal.

The physical experience of playing on an old console and actually holding the original controllers in your hand is also something whose value should not be underestimated. Computers just aren’t designed to be used in the same way. 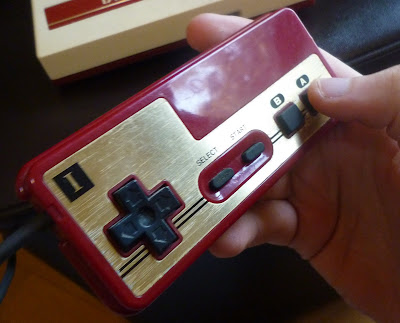 This is something much more than just the design of the controllers, and it is difficult to put into words. It’s the “feel” of them. Somehow your brain knows when you are playing with a real controller. It remembers exactly what they feel like and sends a message subconsciously “this isn’t the real thing” when you try playing a game on something else. I get that feeling when I play on a Famiclone. Even though the controllers are similar to a Famicom’s, they aren’t quite the same. They are just different enough – the amount of resistance when you push the buttons, the weight of the thing, how sensitive it is to your movements, etc – that you notice. 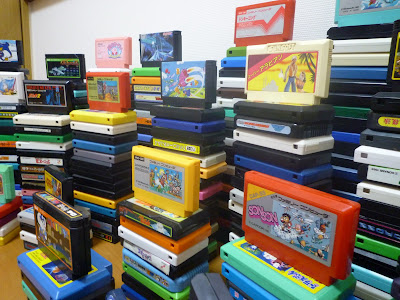 This is a pretty simple point which I won't belabor. The box and cover art of the games are some of their most impressive features. Some games which I can't stand playing I really enjoy looking at because of their fine cover art. Of course you can see scans of the box art on your computer, but having the actual thing in your hand is a much different experience. The wear and tear on the carts themselves can also provide a more human touch to the experience of retro gaming than the standard and sterile computer file can.

5. The Joy of Being a Collector

A key difference from the "hobby" perspective is that the retro-gamer who also owns a console is a kind of collector. Emulation of course is also a hobby, and a good one at that, so I certainly don't say that collecting is superior. It is, however, different, and that fact is worthy of consideration.

This point kind of relates to point 1 above - the activities and mindset of a collector are fundamentally different than the activities and mindset of someone who only plays the games. Again, I'm not saying they are better or worse, just that they are different and as such provide a somewhat more in depth experience than solely playing the games do. Having a collection means having things, sorting them, storing them, caring for them, looking for more of them, trading them, etc etc. This is kind of a pain in the ass to some people, but I rather like it.

As I said at the outset, I totally understand the appeal of emulators. My only purpose in this post is to perhaps give those of you out there who restrict yourselves to playing retro games on the PC some food for thought. Apologies for the profanity, but it needs to be said that owning an old console is pretty fucking awesome, despite all the headaches!

- Why the Famicom Has Aged Well Part 1: Imagination

- Why the Famicom Has Aged Well Part 2: No Planned Obsolescence