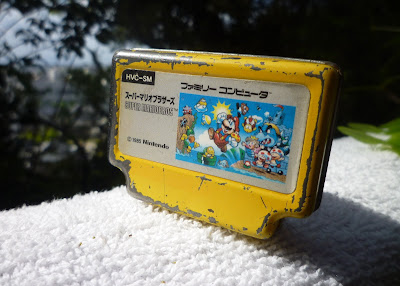 One of those kind of "neat little things you can get in Japan" that I've had for a while is a key chain shaped like a Super Mario Bros. Famicom cart. I bought it for a hundred yen last year and have been carrying it around since.

As you can see from the above photo, its pretty beat up now. As far as key chains go, it wasn't a very good one. It was kind of a bulky thing to have in your pocket and I came very close to ditching it a number of times during the 2010-2011 slim-fit- jeans-wearing season (mid-November to early April).

Its general cuteness always won it a reprieve though. The thing that holds the chain to it broke recently though, effectively ending its career as a key chain.

I couldn't bring myself to throw it out though. Its one of those things that are kind of too nice to throw out even though they have no value. Like those decorative things that come on nice birthday cakes.

Anyway, it does have some potential usefulness as not only is it a key chain, but it is also a box! 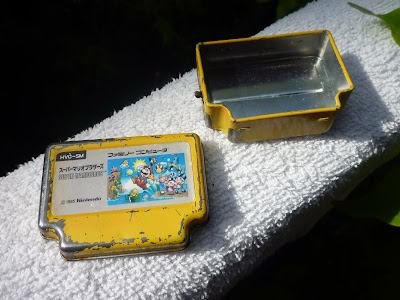 A box that, unfortunately, is way too small to be of any practical use. 1 yen coins will fit in it, but not many of them.

Anyway, these are kind of neat. They made a series of them, with Donkey Kong, Donkey Kong Jr., Wrecking Crew and a couple of other classic Famicom cart versions. Nice little thing to have if you don't wear slim fit jeans with tight pockets. 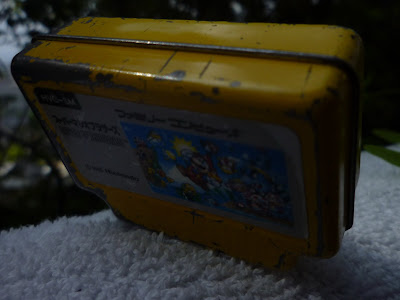 Note the odd angle of the cart. A gust of wind has just caught it and is in the process of knocking it over. This photo was taken on the railing of the second floor balcony to my apartment, which overlooks a steep wooded hillside that is extremely difficult to access and currently infested with Asian Mountain Hornets (look them up on Google. Most hits will also include the phrase "flesh eating venom").

Nestled among the leaves and other forest debris below now lies a Super Mario Brothers Famicom Cart key chain. What will in all likelihood be this little fellow's final resting place. Farewell old friend, farewell!
Posted by Sean at 9:18 AM