Famicom Releases by the Numbers 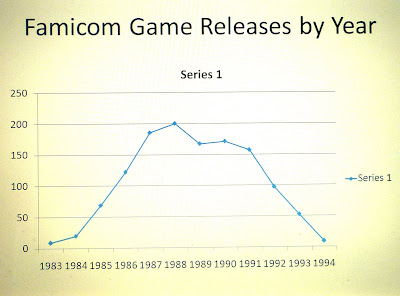 Welcome to the newly re-designed Famicomblog. I love these new Blog templates that for some reason I've been ignoring for so long.

Anyway, kind of a quickie post here. I was browsing the Japanese Famicom Internet world this morning when I came across this interesting Faminfo blog here. He organized all the Famicom game releases into a single table by year, which I thought was kind of neat.

I thought I'd do something similar in English here, hence the above. Its basically the same info from the Japanese site so if you read Japanese, head over there for the original statistics.

Its kind of interesting to see it in table form like this. A few interesting bits of trivia which it reveals:

-In 1983, the year of its release, the Famicom only had 9 games. The same number were released in 1994, the last year of the console's official life.

By the way, if my table looks like something I did up in a powerpoint slide, converted to a pdf, and then realized that Blogger doesn't let you upload pdf files so I just took a picture of my computer screen and uploaded that, its because that is exactly what happened.
Posted by Sean at 9:28 AM