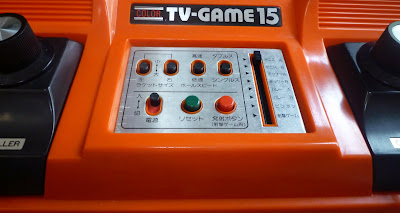 So this is one of those things where everything doesn't quite go to plan.

Omocha Souko has had this Color TV Game 15 for the longest time. Made in the late 1970s by Nintendo, it is one of the oldest of the old-school video game systems. It says it has 15 games built into it, but their method of ENRON-style accounting would never fly in today's gaming world as all the games are variants of Tennis, Hockey or Ping Pong.

If you want to know more about the history of these things I highly recommend Erik's excellent Before Mario blog, which has some really great photos and write-ups about old Nintendo toys, including this one.

Anyway, despite the fact that I've wanted this thing for a long time, I've held off on buying it because they wanted 10,000 yen for it. That is a bit on the high side, which is unusual for Omocha Souko.

They suckered me out this week though. A combination of their various discounts brought the price of the thing down to 6,500 yen. That is boxed and it came with the AC adapter (most don't as the thing didn't originally, it can also run on batteries) so it was a pretty reasonable price.

My wife was looking to get me a present so I said "come on, lets go to Omocha Souko." I'm a lucky guy. She is so sweet.

I brought my camera and intended to photograph the whole purchasing process from its removal from the glass case to the cashier, etc. Like an idiot I forgot. You can see a picture of what it looked like in their glass showcase in a photo I put on this post here last November. It was only when I got home that I remembered to start taking photos. Here it is, fresh out of the bag: 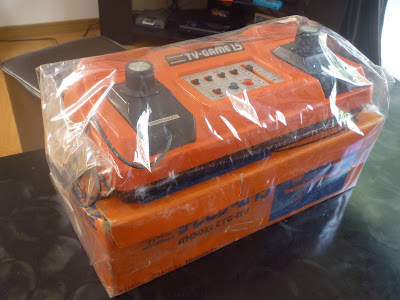 The box is really cool: 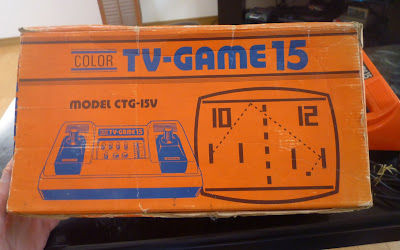 My fun came to a bit of a screeching halt though when it came time to actually hook it up to the TV. I had a deja vu experience, remembering hooking up my first Famicom with RF switch to a TV. Long story short: none of the connections match up and you have to use a lot of adapters and things. I had to go through boxes of old cables and crap looking for the right stuff. It turned our living room into a mess: 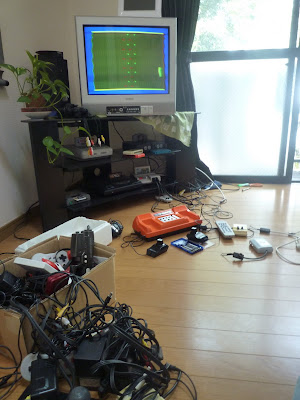 As you can see from the above photo though, I did eventually get it hooked up.

The story does not quite end happily there though. If you look closely at the pong style game displayed on the TV screen in the above photo, you'll notice that there is only one paddle on the right side of the screen. None on the left. Strange, isn't it?

This puzzled me greatly. For about an hour after getting the thing hooked up, no matter what I did I could not get the paddle on the left (1player) to show up.

I made my way onto the internet and after much surfing to no avail eventually stumbled onto this Youtube video. The guy is just showing the insides of his Color TV Game 15 and while doing so he notes that if you unplug one of the controllers (you have to physically open the casing up to do that) the corresponding paddle disappears.

"Great" I thought. Probably the controller is just unplugged inside the thing and all I have to do is plug it back in and we'll be ready to go.

Nope. I took everything apart. Both controllers were plugged in. I noticed that when I switched them though, the number 1 controller did not work at all. The ingrates at Omocha Souko had sold me a Color TV Game 15 with a broken controller! D-oh!

The normal course of action on making such a discovery would be to return the thing for a refund. BUT I can't do that. As we were making the purchase the staff reminded us (as they always do) that they do not accept refunds for any retro game items. And I explicitly said "yes, that is fine" as I always do.

If I'm buying a 300 yen junk item, I'm willing to take the chance and usually stuff works. Even if it doesn't, I never get upset as its small money. But this thing was expensive. And they had a sign saying "Dousa Kakunin" on it, which means that it had been checked. I think when they checked it they probably just plugged it in to see if it worked for a second (which it does) and didn't notice the missing paddle.

So, you know, caveat emptor and all that. The plus side is that all I need is a working controller. As they come hardwired into the console these things are impossible to find on their own. But if I can find a broken console going for cheap I can cannibalize it for parts to make mine work. 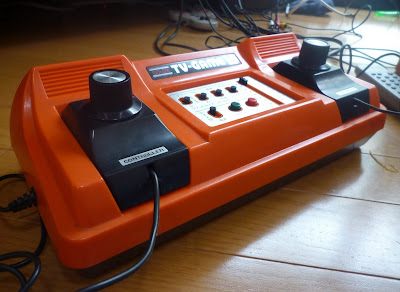 So I can't be too disappointed. I love the thing despite its not working. Just look at it. It looks really really cool, even though it is completely useless.