I'm a big history buff. In real life I do some research that touches on the subject, though I'm in a different field.

I've been wanting to do some articles here on Famicom history for a while and figured I might as well start now. So here goes.

You'll notice that there are a lot of sites that give you the bare facts of the Famicom's history - the dates and names. The best history on the net I've seen is the write up at Game Spy on the 20th anniversary of the console's release. Their (excellent) article though is mainly concerned with the history of the Famicom as a console itself. What I am more interested in is the Famicom's place in Japanese history. What is really missing out there in English is some writing about the Famicom and the people who actually went out, bought the things, played with them, got bored with them and forgot about them back in the day. What place did the Famicom have in Japanese society in the 1980s?

In short, this is not a series about video game history. That has been done to death. It is a series about the Famicom's place in history writ large. This is a subject which has been almost entirely overlooked in the English (and even the Japanese) blogosphere.

Probably a big part of the problem is the sheer difficulty of finding material. Normally I only use photos that I took myself on this blog (with some exceptions), but of course I can't go back in time to the 80s to take such photos, so I'm stuck with free riding off the photos of others for this series, which is a difficult task.

I spent a ton of time trying to find photos of the Famicom actually taken back in the 1980s on the net. If you look around, especially on youtube, you can find videos of original commercials for the Famicom (which are totally awesome, BTW), but not much else. No 'candid' shots. After searching the Japanese internet far and wide the only picture I was able to find was the one above. This came not from a gaming site, but from the website of the Association of Japanese Energy Producers, who used it to show how electricity was used in the 80s. That is how far and wide I had to look!

It seems I'll have to (ugh) start pouring through actual physical media from the day to find more such photos. I'll see what they have at the library...

Anyway, another almost- Famicom photo I found was this one, Akihabara in 1982, on the eve of the Famicom boom: 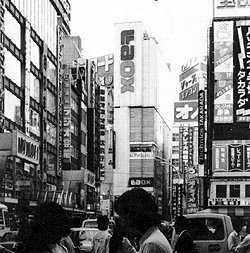 These people didn't know what was about to hit them.

Looks fitting though. Kind of what I imagine 1982 Akihabara to have looked like. The photo comes from the excellent archives section of Akihabara's official site. Even if you can't read Japanese, they have some cool photos of old school stuff in there (just start clicking at random and you are bound to find something).

Anyway, I'll end this post by introducing the "major eras" in Famicom history, as defined by Tatta Hitori no Famicom Shonen, a Japanese Famicom related website. Yeah, I know I said I wasn't going to talk about dates, but for introductory purposes I think these might be useful and of some interest.

The Middle Golden Age (1987-1989): Covering the period when the Famicom reached its peak to just before the release of the Super Famicom.

The Late Golden Age (1990 - 1994): In the wake of the Super Famicom's release, new Famicom titles continue to be released. To the last officially released Famicom title.

The Famicom Ice Age (1994-1997): Mountains of remaining, unsold inventories of Famicom games sold on the market at discounted prices. Some overlap with the late golden age.

The Renaissance (1998-2003): Famicom games begin to regain their value (on the secondary market). Until the 20th anniversary of the Famicom.

The Second Coming of the Famicom (2004 - Present): The value of the better ("premium") Famicom games go up, while all the other games are dumped at discount prices again. Famiclones make their appearance on the market.

I won't necessarily be following this breakdown by era (I'll only be focusing on the "Golden Age" from 1983 to 1994), but there it is for you. This is a loose translation of the original, with some liberties taken here and there.
Posted by Sean at 9:22 AM