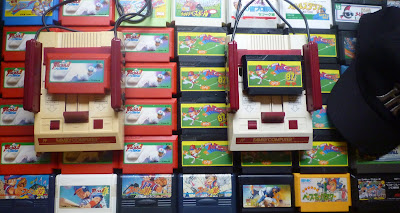 Spring is my favorite season of all. Mainly for the warm weather. But also because it is when my favorite sport of all starts up again: baseball!

The Famicom has an awful lot of baseball games for it. I'm pretty sure there are more Famicom baseball games than any other single type of game. This makes sense as Baseball is definitely the most popular sport in this country (yet another reason why I like living here).

In the comments section of my last post on Ice Climber Nate astutely pointed out that there are a lot of interesting Famicom slang related to Namco's Family Stadium series of baseball games, which were the most popular baseball games on the Famicom (Jaleco's Moero Pro Yakyuu was also popular though). So I thought I would do a post here about Famicom baseball. In the first part of this post I offer some thoughts on the genre of Famicom baseball games and their artistic qualities. In the second part I offer a continuation of my series on Japanese Famicom slang with some entries on baseball games. 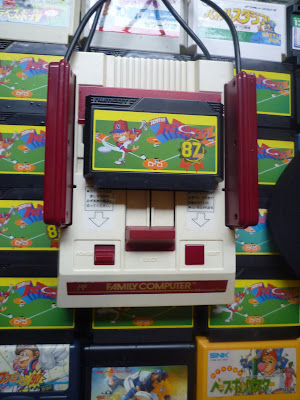 If you were a baseball loving kid in the English speaking world in the 80s as I was, you probably longed to play this game's American release, Tengen's R. B.I. Baseball. This is a really great game, partly because it just plays well, but also because it was the game that used actual Major League player names rather than just generic ones.

I didn't have this game as a kid. Instead I had Bases Loaded 3, which used generic teams and player names, much to my disappointment. That game had its predecessor on the Famicom in Jaleco's Moero Pro Yakyuu: 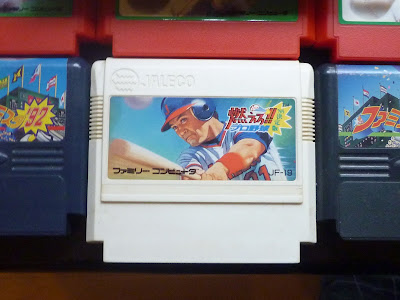 Not a bad game. This one holds the record for being the cheapest Famicom game I have ever purchased: 10 yen. It actually had a "10 yen" price tag on it and everything.

Anyway, a lot of people criticize older Baseball (and other sports games) for not aging well. The clumsy graphics and controls are no match for today's games. I have to admit that this is one of the few genres (along with racing games) where I fully acknowledge and embrace the newer consoles. About the only games I play on my PS2 are Baseball and racing games. Still though, I could never completely abandon my old Famicom baseball games.

One of the main points of brilliance in the early baseball video games is their coincidental similarities with American folk artist's rendering of baseball games. Look at this painting by the brilliant Ralph Fasanella ("Night Game - 'tis a bunt"): 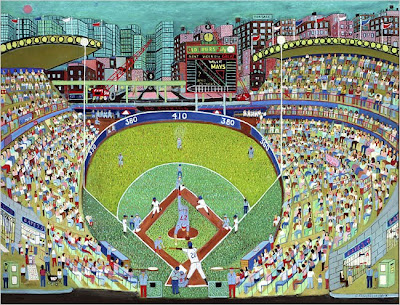 Doesn't that field with those players bear a strong resemblance to the way early baseball video game designers made their field's look? The simplicity brings to mind Nintendo's first baseball game on the Famicom (the descriptively titled "Baseball"): 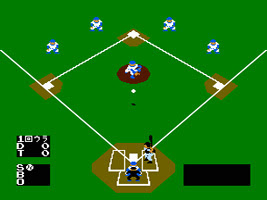 The elements of folk art aren't just found in the games but on their labels as well. Probably the best in my opinion is an obscure old game called Chounin Ultra Baseball: 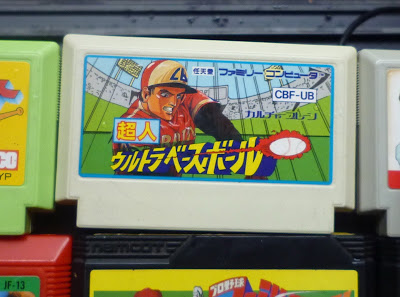 The use of color is perfectly balanced on that cover art. The simplicity of the background and the bold, yellow letters perfectly compliments the detail on the player's jersey and the look of determination on his face. I really love this cart.

OK, now on with the baseball slang. Courtesy of Tatta Hitori no Famicom Shonen's excellent glossary of terms. In no particular order:

コントローラー落とし ("Controller Otoshi") - when you are about to lose, you drop your controller on the Famicom, causing it to stop working, thus nullifying the game's results. Literally "Controller drop".

侍打法 ("Samurai Dahou") - I have a little trouble understanding the precise meaning of this as it is written, but basically this is a type of hit where you stop the bat at one of the corners of the plate. Literally "Samurai hit".

ハットリ打法 ("Hattori Dahou") - another name for a hit similar to Samurai Dahou. The name comes from the game Ninja Hattori Kun.

ピッピ ("Pi-pi") - The sound the pitcher makes in Family Stadium. Can be used in a sentence like "Does anyone want to Pi-pi?" (ie does anyone want to pitch?). Of course in English if you ask that it sounds like you are asking if anyone wants to urinate, so you should probably use this with extreme caution.

武士なさ (Bushi nasa") - This took me a bit of time to figure out, but basically it means to have mercy on your opponent. Like if it is the 9th inning with two outs and your opponent hits a fly ball to right that will end the game, you might choose to let it drop instead. Comes from an old Samurai expression ("Bushi" is another word for Samurai).

雨天中止 ("Utenchuushi") - literally "game called due to rain". Use this phrase when you are losing (and frustrated) and hit the "reset" button. Can also use "teiden" (blackout), "Bochittona" (a word that mimics the sound of a button being pushed) or "hekkushon" (Achooooo!).