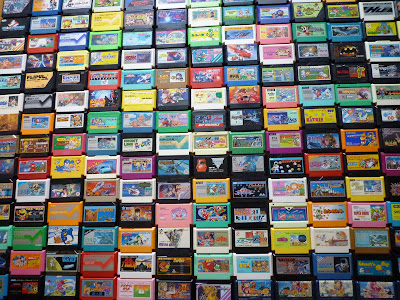 Here we go, part 2 in my new little social history of the Famicom (part 1 is here). Today's post looks at the language of the Famicom.

Jargon is an interesting thing. Impenetrable to outsiders, it helps to define the group of people who use it. Over time, some words may make their way into the larger lexicon of the language in question, but most do not.

When I try to think of some English examples of, for example, NES related jargon that kids back in the day used, I can't really come up with anything. I'm sure it existed but....I don't know. Nothing comes to mind. Weird...some of you readers out there must have some?

Anyway, over at Tatta Hitori no Famicom, they have put together a dictionary of all the "yougo" (jargon) that Famicom fans have developed over the years. It is surprisingly large, with 177 entries to date. I spent a bit of time pouring over these, some are quite witty and amusing. Others perhaps not so much so.

I decided to translate a few of them for your reading pleasure. So here you go all you Famicom wannabes: How to speak "Famicom yougo" like a real 80s Japanese kid.

I've divided these into two sections, the first one looks at some general Famicom words/phrases. The second one looks at words specific to individual games.

ファミコンあらし - "Famicom Arashi". I love this one, probably its my favorite. The definition on the website says:

"A person who goes to a friend's house only to play the Famicom and then goes right home after. Includes people such as those who only owned a Sega, or whose parents accidentally bought them Family Basic thinking it was a Famicom."

ファミる - "Famiru" - the verb form of "Famicom" (ie to "do Famicom" or "Play Famicom"). The -ru ending signifies it is a verb in Japanese.

ファミ逃げ - "Faminige" - Describes the situation where you are playing Famicom at home with someone and they (impolitely) say "Hey, I 'm really good at this part here, gimme the controller" and then when you do they immediately screw it up and die. Then they say "Oh I just remembered something I have to do" and run off. Literally means "Famicom runaway".

岩男 - "Iwao." This word is the nickname for Rockman (Megaman). From the Characters for "rock" and "man".

大人マリオ - "Otona Mario". This is the word you use when you get a mushroom on Super Mario Brothers. Literally means "adult Mario".

おま連 - "Omaren". Used when your opponent erases two rows of pills in Dr. Mario, causing penalty pills to fall onto your screen. Its an abbreviated way of saying "I have you to thank for these damn pills falling onto my screen."

カミカゼ - "Kamikaze" - used when you go really fast on the skateboard and run into an enemy.

地獄落ち - "Jigoku Ochi" - Used in "C" mode when you fall into the abyss and the game makes that "hyuuuuuuuu- " sound. Literally means "Falling into hell".

スペランカー的 - "Spelunker-teki". This can be used with any game, not just Spelunker. It literally means "Spelunker-ish", and refers to any game where you die quickly. A reference to the fact that the Spelunker character dies really easily in that game.