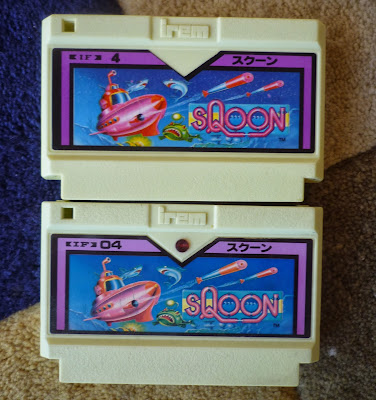 One of these things is not like the other....

Actually wait, both of these things are unlike the other.

Yesterday I got a copy of Sqoon in the mail.  I already had a copy of Sqoon, which is a really cool game, but the copy I got yesterday was missing the little red LED. This actually pleased me.

When Irem released its first series of games for the Famicom - including Sqoon, Spelunker, Spelunker 2, 10 Yard Fight, Zippy Race and Mashou - they included a little red LED on the cart that would illuminate when the Famicom was turned on.  This was a pretty neat innovation given that on an original red and white Famicom it isn`t always obvious if the console is turned on or off from a distance.  These may have been the only cartridges in video game history to have such a feature.

Unfortunately they also cost money to include on the carts and didn`t really influence people`s decision of whether to buy them or not (a decision most people make based on the game`s quality rather than whether or not it has a red light on it), so when they later released a second run of some of the games they eliminated the LEDs from them.

As you can see from my new copy of Sqoon, while they eliminated the LED they kept the rest of the cart exactly the same, including the very conspicuous triangle where the LED was supposed to go.  So the carts without LEDs look a bit awkward.

Despite their awkward appearance, the versions of these carts without the LEDs are worth way more than the ones with LEDs.  Apparently by the time they re-released them these games were already yesterday`s news so not many people bought them.  They are pretty rare today, much like the `Kung Fu` version of Spartan X. They were even featured in that Famicom antiques road show/ price is right TV show I posted about last month, which used the Spelunker version as an example of a rare and valuable variation of a Famicom cart: 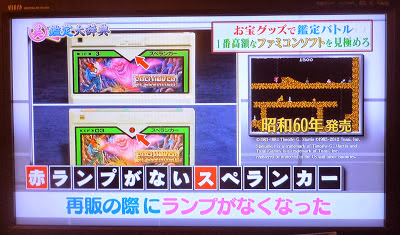 Not all of the games have both versions.  Spelunker 2 and Mashou apparently weren`t popular enough to begin with so they never got no-LED versions of themselves.  As far as I can tell only four - Sqoon, Spelunker, Zippy Race and 10 Yard Fight - exist in both versions (see here for pics of them). 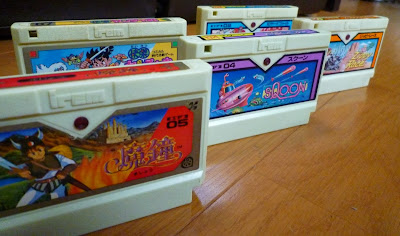 Interestingly one cart exists in only non-LED form, Yan chan Maru (visible in the above photo, back row far left).

That game was apparently a sort of transition cart.  The design is basically identical to the Irem carts which had LEDs, except that it is missing the LED and doesn`t have the little triangular space for them carved out of the front label.  After that, Irem started issuing games in carts that looked more like the standard Famicom carts.

Anyway, there you have it.  Another little piece of Famicom collecting lore explained through the power of Sqoon.
Posted by Sean at 9:26 AM