Well, my indignant boycott of Omocha Souko for selling me a broken console lasted for all of three days. They just know me to well. Cheap Famicom carts are my Kryptonite.

And today did they ever have some cheap Famicom carts.

First, I got these eight here. All of them are carts that I needed and with these acquisitions my collection has moved past the 650 mark, almost 2/3 of the way to the entire set. 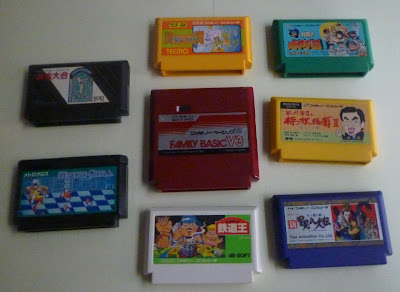 Solomon no Kagi (Solomon's Key) was probably the best one in this lot. I've been looking for a cheap copy of it for a while, this is the first time I've seen one for less than 2,000 yen. I haven't played it yet so I don't know if its any good, but what a deal. I was really psyched to get a copy of Family Basic V3 too.

Next, the Ice Climbers. These were probably the best deal. Two copies of Ice Climber, one complete with box and manual, for 100 yen each: 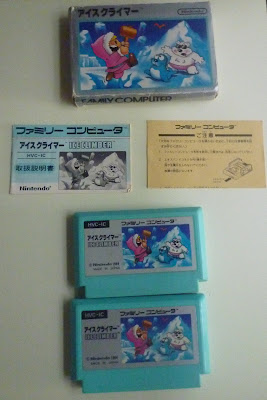 The box is a bit beat up and the carts are a little scuffed, but what a deal. I love the Ice Climber box art, it is probably my favorite cover art from that series of early Nintendo carts with the gray boxes. Something about the maniacal expression on the face of the pink guy amuses me.

I also got a "boxed" copy of Wrecking Crew: 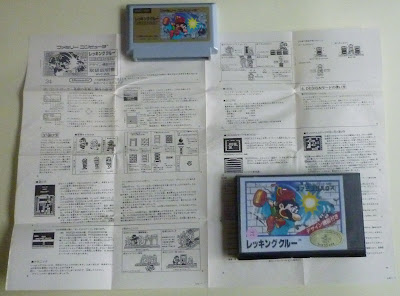 I found this to be interesting. The box and manual aren't original, they were made by a shop called "Famicom House" which used to make its own manuals and boxes for used Famicom games it sold. I think they are kind of neat.

Famicom House, incidentally, still exists and is still called "Famicom House", but it is a grossly misleading name. They have a location near my place, but they only sell games for new systems these days. So if you are looking for Famicom games, Famicom House does not have them so don't bother. They also seem to have diversified heavily into the pornography market, as about 2/3 or so of the floor space is curtained off and devoted to adults only stuff.

Back in the day, though, they were probably a pretty good place to buy Famicom games. Judging by this copy of Wrecking Crew, anyway.

Rounding out my purchase were the eight games featured in the photo at the top of this post. I already have those games, but figured they would make for good trading material someday!