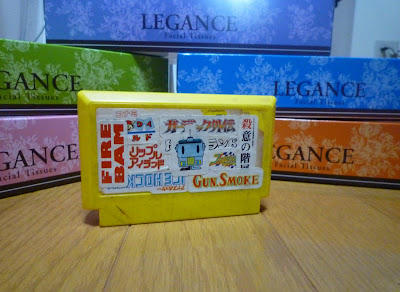 The above is a riddle wrapped in a mystery, inside an enigma. What game is it? Who would do such a thing to a Famicom cart? Where did they get those labels from and what do the carts they originally came with look like now?

I found this game in a lot. It was a lot of 5 carts wrapped in plastic and I could only see the top cart, which was this one. It immediately spoke to me. I had never seen a cart like it before. I loved the mystery. I just had to buy the lot to find out what game it was.

There are 10 labels on it. Nothing of the original label remains. The back looks like this: 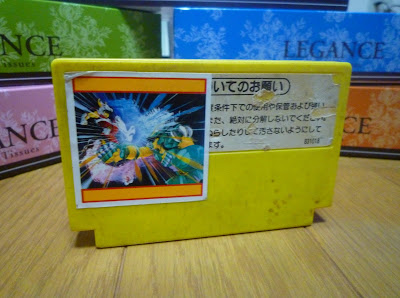 I won't spoil the mystery for you. Feel free to guess what game it is. The fact that it is a yellow cart obviously provides you with a massive hint that eliminates about 90% of the possibilities. I'll also tell you that none of the labels on it are from the actual game itself.

I post this to demonstrate two things: what this cart has and what it doesn't have.

First what it has. In a word: character. Some kid loved this game. They beat the hell out of it. Its got enough war wounds to sink a ship - which in kid's toy parlance means that someone played this thing a lot. We know a bit about its original owner too. The kid had an artistic flair. Maybe she (or he, who knows) loved the game a lot but felt bad that the label had worn out and wanted to give it a new one. She did a pretty good job. Its eclectic. The robot in the middle is perfect.

Now what it doesn't have: money value. If this was a really rare game (another hint to its identity: it isn't) no Famicom collector would ever pay anything for it. They'd want one in mint condition.

Now I should probably stop here to make a couple of points. First is that I subscribe very much to the time honored "to each his own" rule. If people like mint stuff and it makes them happy to collect it then by all means - enjoy! Collecting something is a very subjective experience and different people go about obtaining enjoyment from it in different ways.

Also, I should point out that I'm not entirely insensitive to the condition of my carts. There is no denying that a cart in pristine mint condition can look totally amazing. Like my copy of Mario Brothers here. What a beauty, lovingly framed (as most of these photos are) in front of a five-pack of Legance facial tissues (198 yen): 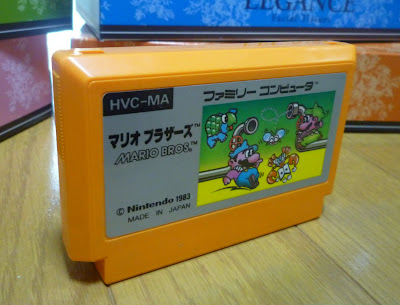 And some damage really does annoy me. Particularly the type that I would categorize as "catastrophic label failure" like with Yie Ar Kung Fu and Moero Pro Yakyu here:

That type of damage really does harm the appearance of the cart without adding anything (unlike with the mystery cart above) so I'm not at all happy with these.

Other types of things that the condition-obsessed collector would view as damage though I view as a positive contribution to the carts, mainly because it tells something about their history. First and foremost of course are the carts which the original owners have written their names on: 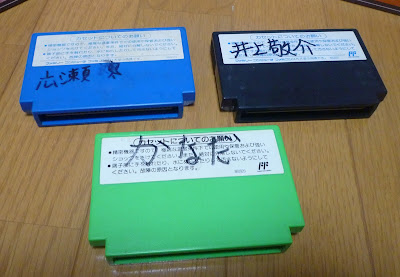 I find this type of thing very endearing. The green cart in the foreground (Yoshi no Tamago) was obviously owned by a very young kid as their name is spelled out in simple hiragana, while the other two wrote their names confidently in kanji, indicating they were a bit older.

It also of course tells us something about how the games were played: with other people. If the kid just played the game at home alone, there would have been no need for them to write their names on the cart so as to identify ownership. These games were probably lent out to friends - though perhaps friends that they didn't trust enough to give the cart to outright without some way of proving ownership should a dispute arise. Maybe they brought them in their bags to school and exchanged them with friends on their way home. Maybe they all brought their favorite games to a friend's house because that friend had a big TV and they spent hours playing together. The list of reasons for writing names on the carts is almost endless - and almost all of them on some level involve the element of childhood friendship. That is something we can all relate to and (I hope) have fond memories of. That is why I love the carts with names on them.

Another thing that you'll find is that some carts have been through several "cycles" of being sold to used game shops. Some of those shops - I don't know why - would replace the original back-side label with ones of their own. Some of them are merely functional (explaining how to take care of the cart, etc) but they also usually had the store's logo and name. These ones come from shops including "Topboy Famicom Shop", "Famicom Shop Brut" and "Chameleon Club Chain". I wonder if they are still in business: 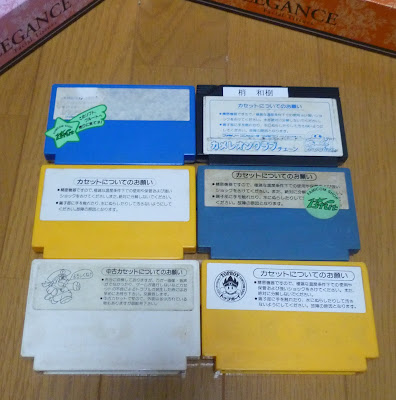 Namco games have produced their own peculiarities owing to the fact that the top labels for the carts didn't come already attached, but were simply packaged with the games so that the owners could stick them on as they chose. They had some options too. Like these copies of Family Stadium. The original owner of the cart on the left chose the rather boring label that merely states the game's name, while the owner of the one on the right chose the much more colorful label with the pictures of the little players (which I much prefer): 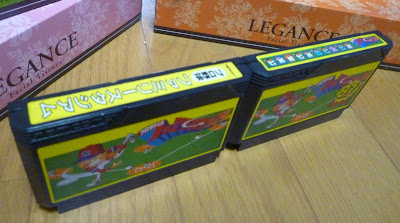 In some cases choosing between the two labels was obviously too difficult, so the owner put them both on, squeezing the second one on the top portion of the back of the cart: 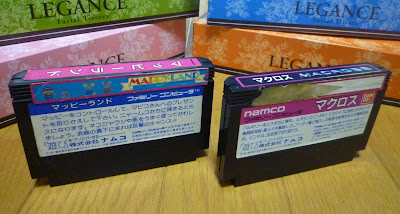 And of course most other makers, including Nintendo, didn't offer that insanely convenient top label so sometimes people had to make ones of their own: 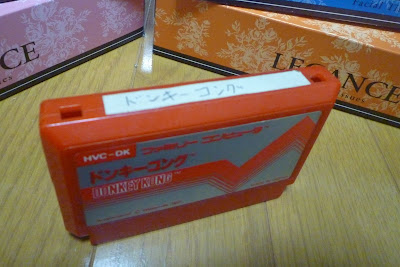 Anyway, what I'm generally getting at with all of this stuff is that the banged-up carts can have a lot of soul to them which the gem mint ones just don't. Gem mint carts - though they can be quite beautiful - are sterile, standardized and boring. Carts in beat-up condition - though they can be quite ugly - are unique, human and interesting. Nine times out of ten I'll choose the latter over the former.

This is one thing that I think the sub-genre of "sealed game collector" are really missing out on. I think to a certain extent - and I mean no offense to them by pointing this out - that some of them are operating under a false impression of why history is important.

I found this blog here which sets out the case in favor of sealed collecting. The author states that:

"Most sealed game collectors started collecting because they want to preserve these games for future generations."

And she also states that they like things that have been "untouched by human hands."

Again I must state that my philosophy is "to each his own." If collecting sealed stuff gives people enjoyment then I say: Great, keep on doing it. In fact the author of that blog seems to genuinely obtain enjoyment from her collection so I have to stress that nothing I write here should be taken as a criticism of her collecting preferences, I'm just referencing the post because it provides what I think is the best summation of the argument in favor of sealed game collecting.

Now having said that, I do have to question the logic stated in that post. Are future generations really going to give a crap that video games have been preserved with their layer of plastic wrap untouched by human hands? I think the answer is a resounding "No."

As evidence I present this photo that I took at Omocha Souko a few weeks ago: 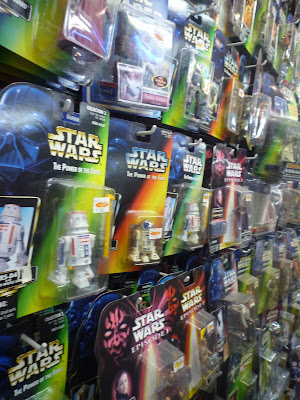 Yup, a bunch of stupid Star Wars Action Figures preciously preserved in their original packaging. 300 yen (about 3$) each. Nobody buying.

These things are truly pathetic. Most of them (excluding the prequel ones) were released in the mid-1990s. So these things have sat in their packaging for going on 15 years now. Why? Well, obviously because hordes of condition-obsessed action figure collectors - adult action figure collectors (see 40 Year Old Virgin) - swarmed the shops when these things were released and hoarded them in the rather stupid belief that they would be worth something someday.

So, why don't people want to buy them today - even at a price that is less than their original retail price back in 1996? Partially of course its because there are just too many of them around for them to have any value. The nerds were just way too efficient at preserving these things.

The result: Nobody has any nostalgic feelings towards them because nobody has any childhood memories of them. They are the bastard children of the toy collecting hobby. Doomed from day one to spend their days unloved and unplayed with- the very reason for their having been brought into existence in the first place. Theirs is a truly tragic story.

Compare their story with the story of this Star Wars Action Figure:

The same day I took the 1990s Star Wars action figures picture I found this at the same store in a junk bin for 100 yen (1$). This is an original 1978 Takara Darth Vader action figure. It is the most awesome non-Famicom thing I have ever found at Omocha Souko. It doesn't have its box or its accessories and its got some dings here and there (which I'm guessing is why they dumped it in the junk section), but what it does have is a soul. It didn't spend its life sealed in a plastic package in the basement of Comic Book Guy from the Simpsons. A kid actually had this thing and played with it.

Future generations might be interested in something like this. Or the beat up Famicom games that have no economic value but plenty of charm. "Special edition" games issued in "limited runs" that no child will ever touch because all the grown-up collectors are too busy preserving them in a state "untouched by human hands"? Nope. Future landfill is all those things are. The ultimate irony is that in attempting to preserve the history of these things, sealed collectors are really denying it to them. History, after all, isn't about packaging. It is about human hands doing things.
Posted by Sean at 10:39 AM