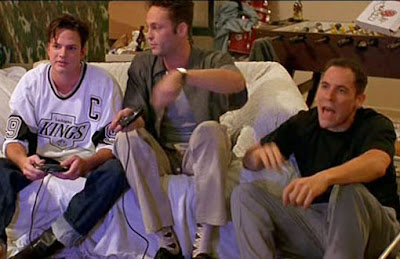 I watched Swingers the other day for maybe the fourth or fifth time. I really like Swingers. Its one of those independent films done on a shoestring budget with a bunch of talented unknowns that gets everything right.

Its just so money.

I think one of best parts of Swingers, at least from a 30-something video game blogger's point of view, is the scene where they play hockey on the Sega Genesis. The scene (watch it here) gets everything about 90s gaming by poor 20-something guys exactly right.

-Use of instant replay to taunt opponent after goal;

-A visibly annoyed third guy waiting his turn to play;

-Complaints shared by all parties present about how the new version of the game doesn't allow fighting;

-One guy demonstrating how to make Gretzky's head bleed to the third guy, possibly because he feels bad about the fact that he isn't getting to play;

-Use of the old "un-pausing the game while the opponent is distracted while paying for pizza" routine;

-A fight breaking out over the use of said routine;

-Embarrassing the guy who goes to the door to pay for the pizza with lurid sexual innuendo;

I think the reason I like this scene so much is that it is exactly the way I remember playing games in the 1990s. I'm always going on about how nostalgic I feel for the 80s on this blog that I sometimes forget how awesome the 90s were.

This, for example, is the apartment I lived in from 1998 to 1999 (room-mates faces redacted to protect the innocent): 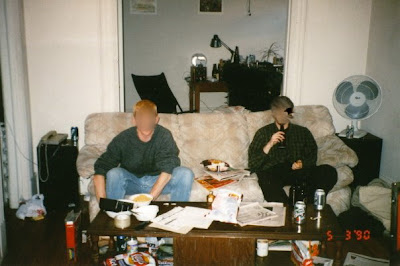 Pretty much exactly the same type of place as the apartment in Swingers where they played that Genesis hockey game.

At first, we only had an NES, but a couple months after moving in my room-mate (on the left) bought a Nintendo 64. That changed our lives forever. The three of us, and friends who'd drop by, would just play that thing for hours, drinking massive quantities of beer, fighting, and generally just trying to annoy the shit out of each other. But, you know, in a friendly guy way.

After a few hours of that, we'd head out to the bars in town and not come even remotely close to picking up any women.

Ah, how I miss those days.

Anyway, I've been reading about how little money the makers of Swingers had when making the film. They had to film it in actual people's apartments just using whatever was lying around. I guess that is the reason that scene looks so authentic: it actually is just somebody's apartment. I also like the fact that at the time the film came out the Genesis was already old news and not the latest console.

If the film had been made with a big studio budget, they'd have screwed it up completely by making the apartment look clean, and they'd have been playing the newest game (and not allowed to say anything bad about it because they had some sort of product placement deal with the maker).

It would have (ironically) been much closer to the scenes in the Break Up where Vince Vaughn is playing the PS2, which are just blah.

Above: not the best video game movie scene ever.
Oh how the mighty have fallen.

Anyway, anybody else got any favorite video game movie scenes?
Posted by Sean at 5:18 PM