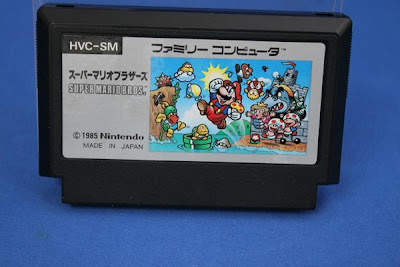 (image source: Yahoo Auctions Page)
This might be a rarity. Or not, I'm not sure.

Anyway, recently I've been surfing the Japanese internet for interesting Famicom stuff and today I came up with this: a black Super Mario Bros. Famicom cart.

As most Famicom collectors know, the standard Super Mario Bros. cart is a yellow-orange color. I've never seen one in black plastic before.

It isn't clear if this thing is for real or a fake. In the description of the item at the bottom of the page the seller addresses this question, stating that he purchased it in a lot of 100 games from a single seller. The other games in the lot all had a mark on them "editor's division" (not sure if that is an accurate translation) and he believes they were all either sample items or leftover prizes from a competition or something. He states that none of the other games looked like counterfeits. The back has the number 851224 on it and it is a loose cart without the box.

Not sure what to make of it. I haven't seen anything else on the web about an item like this or how rare it might be. Kind of neat if it is real though.