Today I picked up what is without a doubt the most interesting retro game thing I've ever come across at Omocha Souko. You know how some sellers on Ebay like to throw around the phrase "Mega Rare" for stuff that is insanely common and easy to find? Well, I think this item might actually qualify as "mega rare" in the real sense and not the Ebay seller sense of the phrase. In fact I believe this post is the first time anybody has actually put photos and a description of this item up in English.

So remember: you saw it on Famicomblog first! Feel free to go forth into the world and propagate the knowledge you will have gained from reading this rather silly post.

What am I talking about? Let me introduce the latest addition to my collection, the Kousenjuu (light gun) SP "Electro Safari": 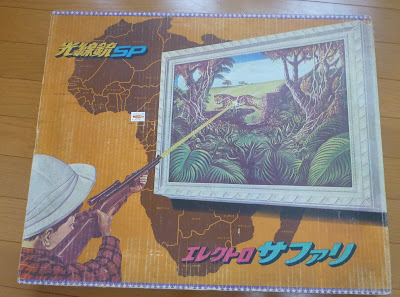 I saw this on the shelf at Omocha Souko this morning for 2,000 yen (about 20 dollars US). I thought it looked kind of neat. Some kind of 70s toy with a great looking box. When I took it off the shelf and saw who the manufacturer was though I became really interested in it: 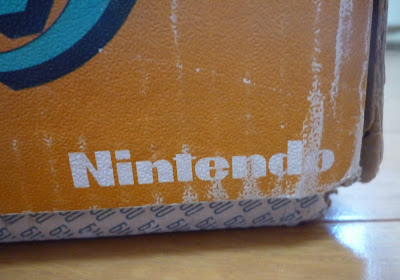 Further looking around on the box turned up this: 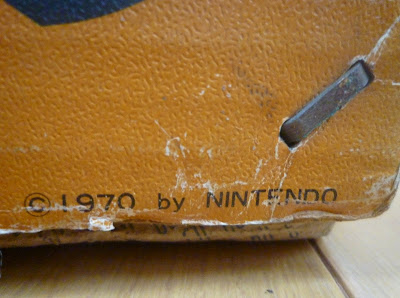 As is often the case when it comes to sizeable things, I couldn't convince myself to buy it then and there. It was big and it was something I didn't know anything about. If I bought it and then discovered it was some really common thing you can get anywhere, I would have felt really stupid when the Mrs. came home and I had to explain the new purchase.

So I came home. And did an internet search. I entered the name (光線銃エレクトロサファリ) into Google and did a search.

I got nothing related to this game. Mostly a bunch of stuff about Famicom light gun games.

Hmmm. Intrigued I did a search of the word in English. This is a Nintendo product, for christ's sake, surely thousands of my fellow video-game nerds have already catalogued this thing all over the internet.

Nope. Nada. Even Wikipedia, which usually has tons of lists and info on retro game products had nothing (in English - see bottom of this post for what the Japanese Wikipedia had to say about this series).

I then turned to Famicom World and asked if anyone there knew what it was. Nintendodork was very helpful. Long story short he told me that these things are really rare and that I should get my ass back to Omocha Souko ASAP before someone else snagged it.

I'm rather pleased with it. The box is just awesome. The simplicity and colorfulness of the cover art is just way too cool: 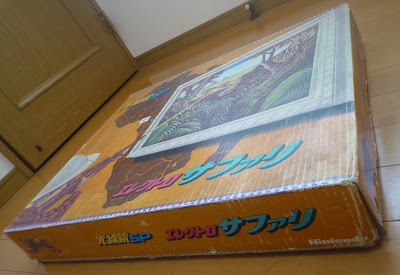 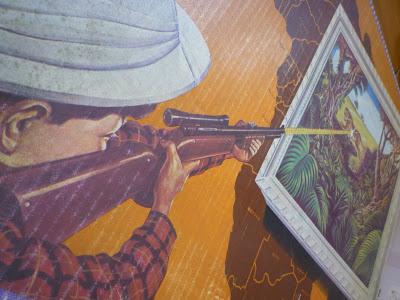 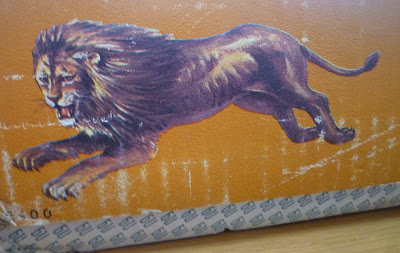 It still had the original price tag. 5,900 yen. The kanji on it indicates it was purchased at Iwataya department store all those many years ago (I love details like that which tell you something about where old stuff like this came from): 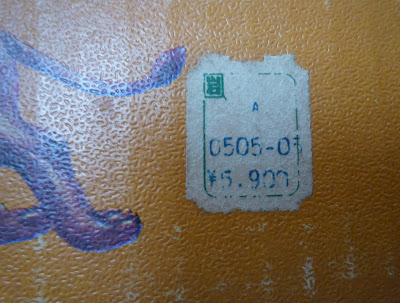 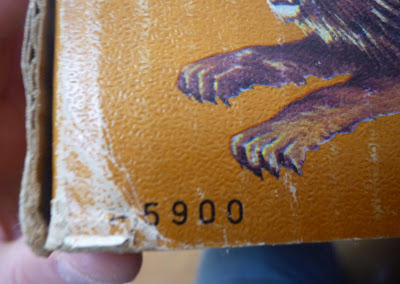 Unfortunately it also had Omocha Souko's price tag. Dead centre on the front. With TAPE too! F%#k! 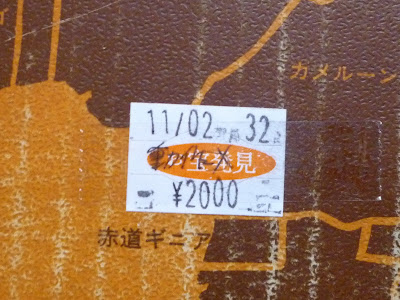 Thankfully some very delicate peeling removed it without damage. I felt like I was defusing a bomb or performing open heart surgery as I did this: 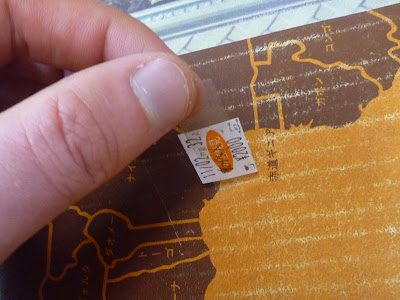 Next I opened up the box and voila! 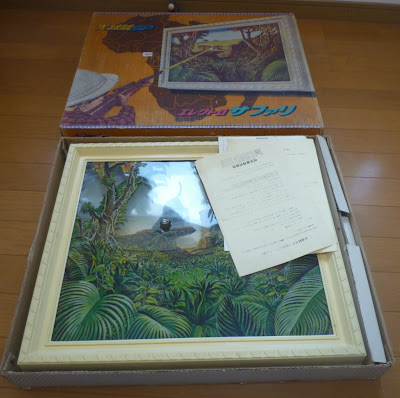 A beautiful picture of a safari scene. High art at its finest: 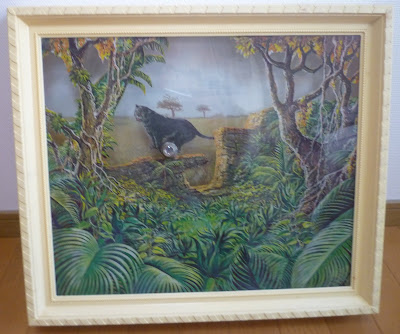 The object of the game was to shoot the cheetah (I think that is a cheetah): 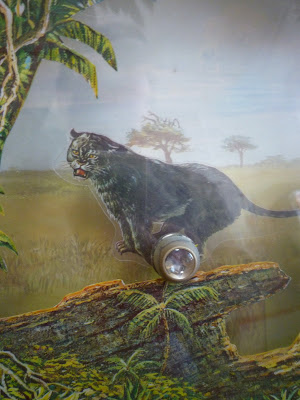 The light sensor sticks out from under the glass: 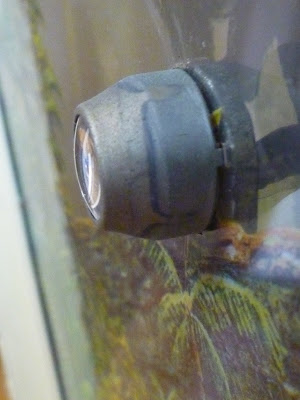 This is what the back looks like. It has a string so you can hang it up. Maybe I'm going into too much detail here but what the hell, I love this thing so I'm going to make all of you love it too:

The date of its manufacture is confirmed here too: 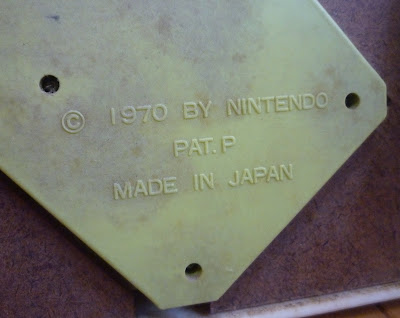 It came with a few pages of instructions: 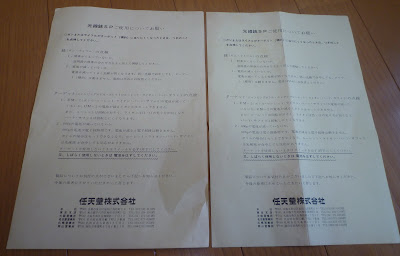 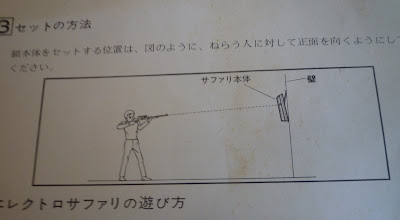 The frame is a piece of elegant beauty: 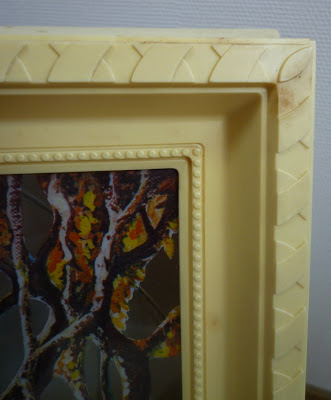 There was a bit of a catch, though. Can you guess what? Come on. You know.

Yup. Four words (if you translate it into English):

D-oh! So I don't know if it works or not. Judging by the way it was kept in its box with everything (even the original packing paper) I'm guessing it might work. But who knows.

Edited to Note:
A bit of further research turned up info on some similar games in Japanese. This page has some pics of some other games in the same series:

The Japanese wikipedia entry for 光線銃シリーズ , "light gun series" does have a bit of useful info about this series, if not this game in particular. It says that they (along with all Nintendo light gun games) were developed by Gunpei Yokoi and went on sale in 1970. Unlike the Famicom zapper (and later ones) this one relied on a "solar battery" (not sure about that translation) with the gun shooting light at the target (with the Famicom zapper the TV shoots light at the gun rather than the other way around).

They released a number of versions with different action scenes, though it doesn't tell us how many or what kind of scenes. It was a very big hit in the year it was released and became a top seller.

Also this video (with English subtitles) from the Nintendo Museum at the Hankyu Department Store in Osaka features some similar games (see 5:02 for one that is almost the same as mine):