Famiclone Wars Part 2: the Next II 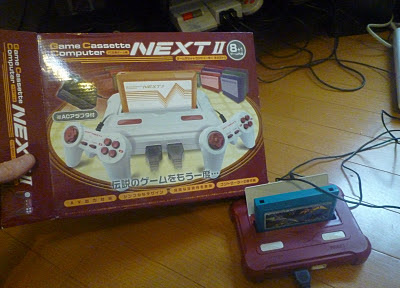 The Next II is one of the more common Famiclones floating around out there. You can buy them at the major retailer Don Quixote for a little under 2000 yen and used ones pop up at retro game shops from time to time.

Like the Famulator it retains the color scheme of the original Famicom, but other than that there isn`t much attempt to make it look like the Famicom. It is kind of just a generic looking box: 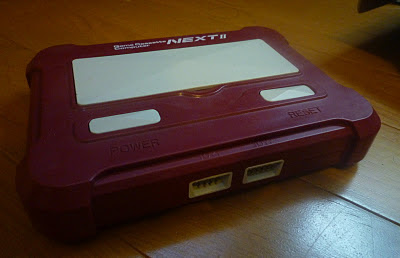 As you can see from the photo on the box in the top photo of this post, they come in two versions, basically just reversing the same color scheme on each.

Size-wise it is about the same as the Famulator and with a cart inserted it looks quite small: 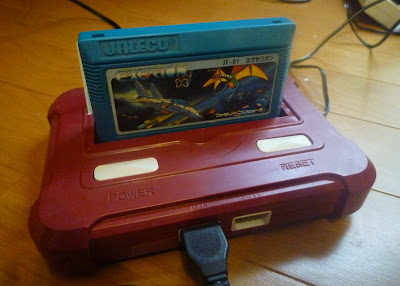 This Famiclone comes with 9 games built into it. If you turn it on without a cart inserted you go directly to the game select menu: 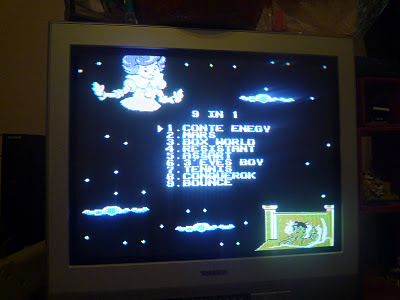 I gave each of these a try and almost all of them are complete rip-offs of officially released Famicom games. You`ve got Lode Runner, Super Star Force, Circus Charlie (twice - they made a different game for two different levels of that one), Tennis, Mappy and a couple others that I didn`t recognize but assume they are also stolen. The names are changed and they made some basic changes to the graphics, but the games are instantly recognizable. The sound effects are directly lifted from the originals. This is what the Mappy clone looks like: 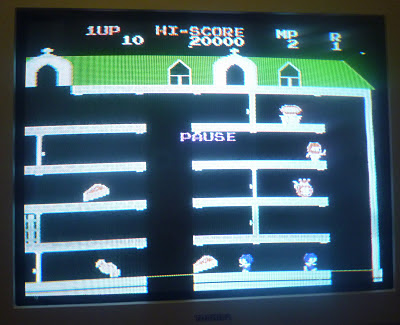 I find this very surprising since these things aren`t black market finds and are sold at major retail chains throughout the country. As someone with a bit more than a passing knowledge of copyright law, I can confidently say that these are all massively illegal and I am surprised that Namco, Hudson Soft, etc haven`t sued the makers (and Don Quixote) for producing and marketing them.

Anyway, that is just an aside that doesn`t really have anything to do with the Famiclone itself. The controller on the thing is designed similarly to the Playstation controller: 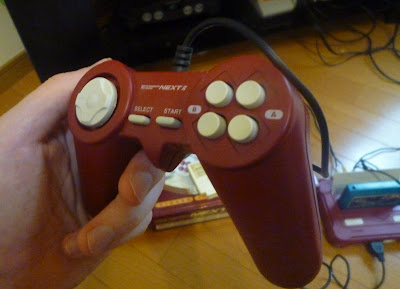 In terms of functionality it works fine. The buttons are reasonable quality, though it does make a rattling sound when you shake it.

I don`t particularly like this sort of design though. It works fine on a Playstation, but when I play Famicom games I want a controller that at least looks like it was made in the 1980s.

A lot of Famiclones try to copy the design of modern consoles like this and I wish they would stop. It is just so.....nouveau riche. It is to video game console design what Greco-Roman decorative fountains are to suburban American home gardens. This trend must be stopped.

Email ThisBlogThis!Share to TwitterShare to FacebookShare to Pinterest
Labels: Famiclones, Next II