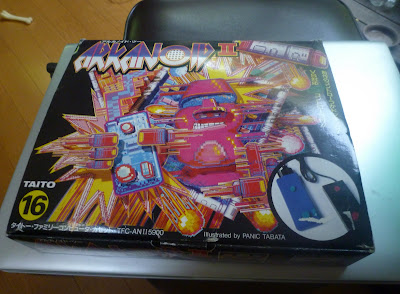 This was another Omocha Souko find. This wasn`t in the junk section, in fact it wasn`t even in the Omocha Souko I usually go to. This was in the other one way out in the east of town, which I only get to once every 3 or 4 months at best.

Arkanoid II is a really good game to get boxed because when you open the box it has this: 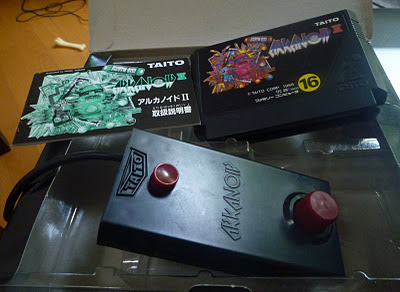 There are actually two versions of the Famicom Arkanoid controller. Way back in 2009 the subject of the second post I ever put up on this blog was about the other version of this controller, which is shaped a bit differently and blue.

I was never satisfied with that one though because it has this glitch in it that prevents you from moving the Vaus all the way to the right of the screen, making it effectively useless. So I was pretty happy to find this one complete with the box and everything for such a cheap price. 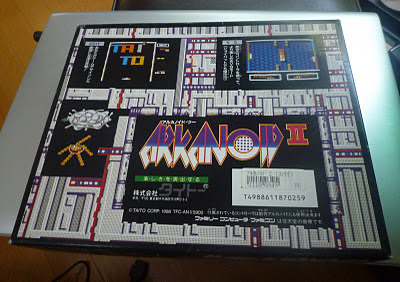 This controller is, incidentally, something that you really do need to play Arkanoid or Arkanoid II properly on the Famicom. You can play both games with the standard Famicom controller, but the problem is that you don`t get any differential speed on those. That means you can`t race over when the ball takes an unexpected bounce and you`ll find yourself constantly losing lives that could have been saved if you had the proper controller. Getting past about the third level is very difficult when Arkanoid is played that way.

Well, it is actually difficult to get past level three using this controller too, I haven`t quite gotten used to it yet. I still like it quite a bit.

Another thing I discovered with this purchase which will only be of interest to people who fervently collect Famicom games is that Taito seems to have released two versions of the Arkanoid II cart: 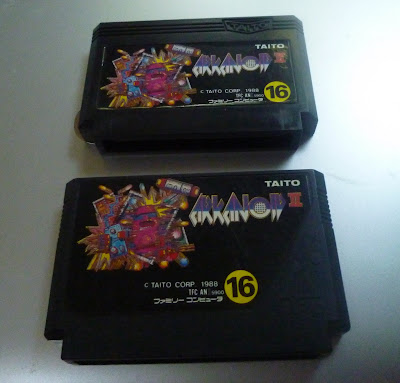 The one on the top is the Arkanoid II cart I`ve had for a while. The one on the bottom is the one I got with this boxed one. As you can see, they are different.

(light coughing heard in the distance, tumbleweed blows by)

Yeah, OK, not exactly an earth shattering discovery, but I still thought it was neat. I`ve seen lots of copies of the top version of the cart, but this is the first I`ve seen of the bottom version.