Another one of my recent bargain finds at Omocha Souko was a complete in box copy of Gimmick.

This is a pretty hard game to find for the Famicom so I was quite surprised to see it lying in a black plastic crate surrounded by miscellaneous cables and broken controllers. I nonchalantly tossed it into my cart and whisked it home. 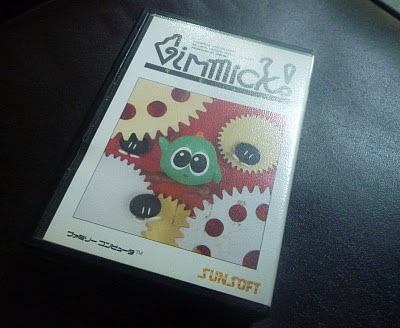 That night my wife and I, having no previous knowledge about how the game works, put it through its first sea trials. On turning it on the first thing we noticed was that it looked a lot like Hoshi no Kirby (Kirby`s Adventure). You control a little blob (named Yumetaro) on a side scrolling platformer in a very colorful, Kirby-esque environment.

So I first tried playing it like Kirby, which got me killed rather quickly as unlike Kirby Yumetaro doesn`t have the power of flight, nor can he suck up enemies like a vaccuum. Instead, Yumetaro confronts enemies either by jumping over (or on top of) them or by throwing stars at them. To do the latter, you have to hold the B button down for a couple of seconds and wait for the star to form on top of his head and then let it go, which causes Yumetaro to throw it. This resulted in a lot of confusion when I first tried it:

Me: ¨I AM pushing the B button, but this bloody star just appears and disappears and the enemies don`t get sucked up......NOW what is he doing?¨

Wife: ¨No, its not Kirby, you have to KEEP pushing the B button down and wait for the star to appear and then throw it.¨

Me: ¨I do keep pushing the B button down but none of these enemies are getting sucked up.¨

Wife: (getting increasingly frustrated) ¨No, its not Kirby, push B button and keep it pushed.....¨

Anyway, it is actually quite an enjoyable game once you give up on all attempts to play it like Kirby. Hardcore Gaming 101 has an excellent write up about it here, so I won`t attempt to describe the entire game in detail. This, of course, also allows me to avoid the humiliation of admitting that we didn`t make it past the first level and that I am thus completely unqualified to write a proper review of the game. 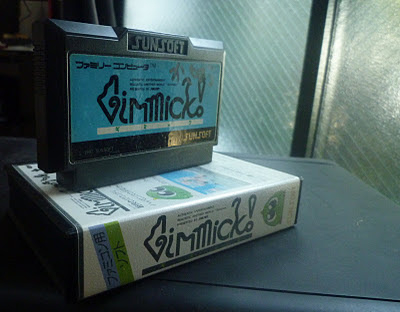 I really like the box art, but the cart itself isn`t much to look at. Most Sunsoft carts have brightly colored labels (like After Burner or Super Arabian) but they took a minimalist approach to Gimmick. This is pretty hard to understand as the contrast between the Spartan, subdued color of the cart and the vibrant colors in the game is extreme. Still though, its a welcome addition to my collection.
Posted by Sean at 8:34 AM

Email ThisBlogThis!Share to TwitterShare to FacebookShare to Pinterest
Labels: Gimmick, Hoshi no Kirby