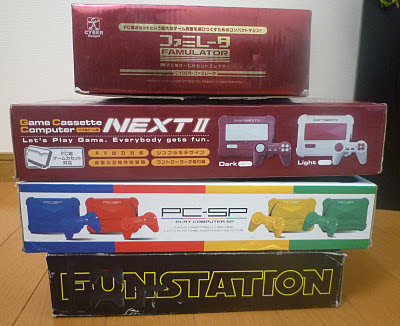 Among the other things I have picked up at Omocha Souko recently have been a pile of Famiclones. Literally a pile of them. Look at that picture above. See? A pile.

Anyway, I thought I`d devote a few posts to doing mini-reviews of each of them. Famiclones are kind of an interesting sub-genre of the Famicom world. There are a ton of different ones out there, many released since Nintendo`s patent on the Famicom expired in 2003, making the technology part of the public domain.

These usually retail for between 1500 and 2500 yen at various retailers like Don Quixote and Village Vanguard. The thing I like about Famiclones is that they come in a ton of different colors, shapes, sizes and levels of commitment to not violating intellectual property rights. So there is a lot of variety out there.

I thought I`d start at the top of the pile with this Famiclone, the Famulator: 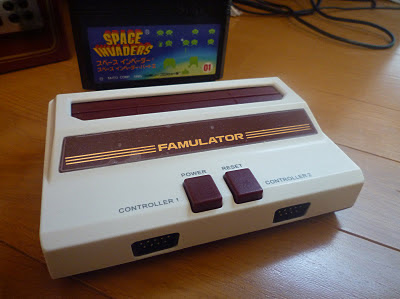 Out of the four Famiclones I have this one bears the strongest physical resemblance to the actual Famicom. The red and white colors are about the same and that belt where it says Famulator across the front looks quite similar to the one on the front of the Famicom. It even has a bit of the clear plastic starting to separate from the red plastic, which commonly happens on the real Famicom too.

In terms of size though, the Famulator is much smaller than the actual Famicom, a fact that you really notice when you put a cart into it: 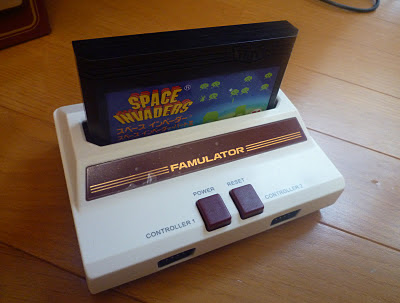 I gave it a go with Space Invaders there. The controller is quite small and simple in design: 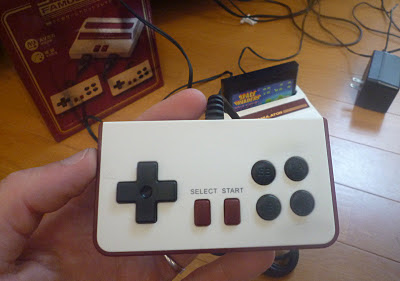 For a Famiclone though I was surprised at how good the controller was. It is quite sturdy and the buttons feel right, providing the right amount of resistance to the touch.

When I tried to remove Space Invaders after finishing though I did notice that it is quite difficult to take carts out of the thing. I had to really wrench on the thing to the point that I was worried about breaking it before I got it out. The opening you put the cart into is quite small and doesn`t allow much wiggle room which probably explains why it was so hard.

Another feature worth noting is that this Famiclone doesn`t come with any built in game software of its own, you can only play it if you put a cart in.

Anyway, this is a pretty decent Famiclone. Small, attractive and with good controllers, but without any software built in and with some cart-removal difficulties. In the next post I`ll look at the next Famiclone - the Next II.