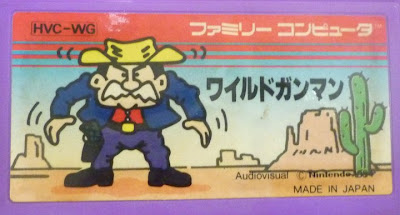 The censored words in the title of this post are actually just "My Famicom". Not sure why I felt the need to block them out like that.

Anyway, my visit to the other Omocha Souko yesterday turned up more than just the Luigi Mosaic. I bought something too. A good thing.

At the front of the store they have a pile of old consoles. Among the Mega Drives and Nintendo 64s I found this guy snuggly nestled, awaiting purchase: 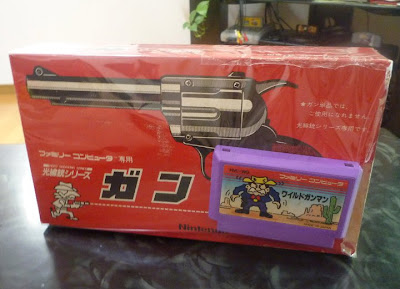 This is the Famicom light gun, the original NES zapper.

I have been searching for one of these for the longest time. Its been a craving of mine. I had maintained fantasies about finding one in a junk bin for 100 yen or something, but 2 and a half years of fruitless searching has convinced me of the futility of that dream. These things are HARD to find. Yesterday was the first time I had ever seen one in person.

So I was quite pleasantly surprised to see it there. The price was 3,000 yen (about 35-40$ US) and, as you can see, they bundled it with a copy of Wild Gunman. The box was in great condition and they said it was in working order, so how could I resist?

Opening it up, this is what I got: 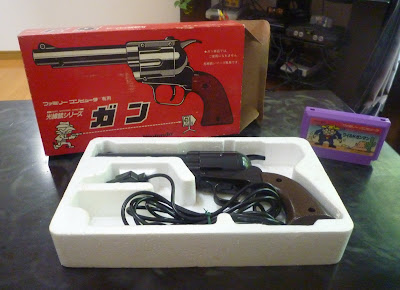 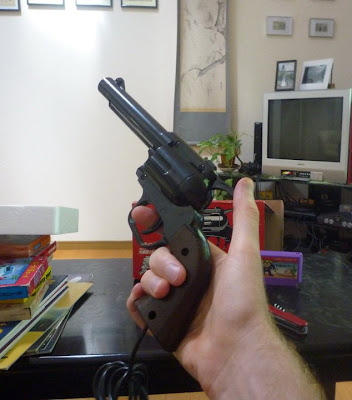 I had the zapper for my NES (still have it, in fact), but this thing is just a million times better. According to the tales of internet lore, American safety regulations prevented Nintendo from making the zapper look like a real revolver, so they made that kind of generic space gun looking gray thing for the NES. I like the revolver look way better though.

I mean, when I popped Wild Gunman in for a go, I actually kind of felt like I was in the old west with this thing. Well, just a bit - my living room looks nothing like the old west (except for the dust). Still though, its way more fun to be blowing away gun shooters with an old west 6 shooter than some gray "zapper". You can even cock the hammer on this thing. 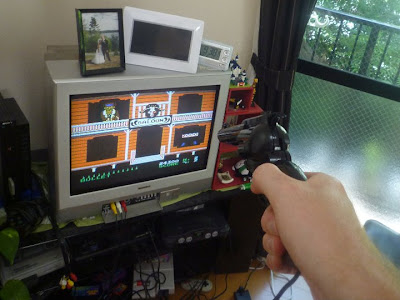 The box is great too. On the back it has a very complicated diagram. If you look closely you'll notice that the only useful information this thing conveys is "plug it in." I guess they had to put something back there: 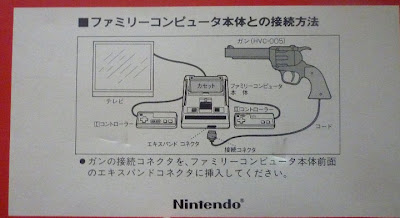 The front of the box is great too. Its got a little cowboy in the lower left corner shooting at a TV. It looks great on my shelf, I put it right in front of my bottle of whiskey for that added touch of the old west: 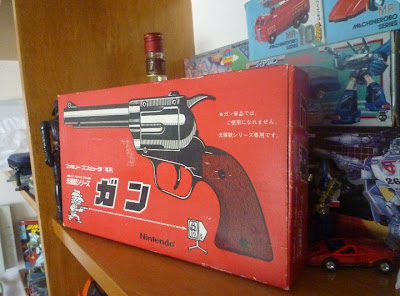 The other thing I really like about this game is that it was featured in Back to the Future II. Apparently the filmmakers took some liberties as the arcade cabinet they show in the film didn't exist and the gameplay they show is a bit different from the actual game. Still though, take a look at that gun Marty McFly uses to shoot the bad guys. Spitting image of the Famicom light gun!

Anyway, I'm quite happy with this thing. It is one of the rare times when I buy something and it turns out to be every bit as good as I thought it would be (Family Trainer - that barb is directed at you).