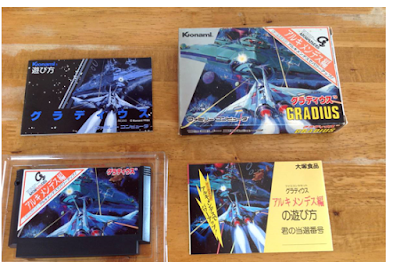 One of the more popular holy grails out there for Famicom collectors is the Archimendes version of Gradius.  It was released in 1985 as part of a promotion by Otsuka Corporation which sold a cup ramen called Archimendes ("men" is the Japanese word for noodle so its a sort of word play, I see it accidentally written "Archimedes" in English a lot).  Here is an absolutely fabulous 1980s commercial for the cup ramen (which doesn't relate to the game at all but is worth watching because holy 80s is that ever 80s)!


Customers who bought the Archimendes cup ramen could enter a contest to win one of 4,000 copies of the Archimendes Gradius Famicom game, which was not available in stores.

On the outside the cart and box is just a regular Gradius game with a distinctive triangular Archimendes sticker on the upper corner of the front.  The manual is the same too, though the Archimendes version also came with a special insert that had a serial number on the front, so each of the 4,000 copies was individually numbered.

The game play is basically the same as Gradius, the only difference (which is kind of awesome) is that the power ups in the Archimendes version are shaped like Archimendes cup ramens.

The game is massively popular among Japanese Famicom collectors (less so it seems with foreign collectors, I was surprised at how little has been written about it on the internet in English when doing background research for this post).  It is among the most expensive Famicom games out there, I've seen loose copies for sale in the 50-60,000 Yen range at Super Potato, and complete copies with the serial numbered inserts are more in the "If you have to ask, you can't afford it" price range.

I've wanted one for a long time and have scoured Yahoo Auctions listings for a decent copy at a decent price for years, but thus far it continues to elude me.  What this experience has done for me though is to question the legitimacy of a lot of the copies of the game I see in those auctions.  I'm pretty sure that half of them that I see are fake.

Fake Famicom games are actually pretty rare.  Since video game collecting has taken off as a hobby companies in China have been cranking out fakes of expensive NES titles which I see on Ebay all the time, but I hadn't been aware of any similar Famicom ones.  Of course there are boatloads of pirated Famicom carts out there, but here I'm talking about ones that are designed to look like the real thing and rip off people who think they are buying a real version of an expensive game.  I'm pretty sure the same producers making NES fakes are now making fake Archimendes games.

My suspicions - and at this point they are just that, I don't have a fake game in my hands right now to prove it - are based on two things I've observed.

First is the fact that of all the expensive Famicom games out there, Archimendes is probably the easiest to fake (except maybe the gold versions of Rockman and Binary Land which can of course just be painted that way).  Regular Gradius carts and boxes are extremely easy and cheap to find and to make a physically convincing fake all you need to do is print a couple of stickers and you are done.  So you can avoid going to the expense and time of trying to produce the cart and box, which is the most difficult part.

The fact that the game play is different from the regular Gradius adds a twist, but its actually also easily overcome since they've been making boards for pirated games for decades now all they have to do is make some for that and slip them into a Gradius cart and boom - you've got a convincing fake that could only be detected by someone actually opening the cart up and looking at the insides, something most owners would be reluctant to do with such an expensive game.

A good point of comparison in this regard would be the Punch Out! Gold cart, which is also a Famicom collecting holy grail.  Producing a fake of that would be way harder since the regular version of that game is in a completely different cart with a completely different label.  I'm sure a dedicated faker could with enough time and money produce a fake Punch Out cart, but it would be way more difficult.  Getting the cart to look right, with the right plastic, the exact right color, the exact right texture and then doing the same with the labels is not only time consuming but also opens you up to leaving tell tale signs of the cart being fake with everything you have to reproduce just right.  Having the legit carts already made for you, as with Gradius, reduces your workload and odds of detection by 95%.  Punch Out! Gold is also complicated by the fact that it has an unusual cart shape, which most other Famicom carts didn't use.

Second is the fact that Gradius Archimendes seems to show up in Yahoo Auctions listings way more often than any other similarly rare and expensive (but harder to fake) game.  Most of them with the same level of rarity aren't usually available on Yahoo Auctions at any given time and only pop up every once in a while.  But Gradius Archimendes is almost always available, and often both CIB and in very nice condition, which is extremely unusual (with most other rarities its way more common to just find them loose rather than CIB and with a bit of wear).

Again a comparison with the hard-to-fake Punch Out! Gold cart is useful.  10,000 copies of that cart were distributed back in the day as a prize, so there are more than twice as many of that game in existence as there are for Archimendes.  You would thus expect it to be about twice as easy to find.  But it isn't.  I've been watching both for years and usually Archimendes is as easy or easier to find on Yahoo Auctions.  Right now there are two copies of both games listed, but both of the Archimendes ones are CIB, while only one of the Punch Out! Gold carts comes with the box (but no manual, the other is completely loose).  This could be coincidence, but actually its pretty much always like that, despite being rarer its much more common to find complete copies of Gradius Archimendes than complete copies of Punch Out! Gold on Yahoo Auctions, which makes no sense. Since the beginning of this year there have been 11 recorded sales of Archimendes on Yahoo Auctions, 8 of them being CIB, and 10 of Punch Out! Gold , only 4 of which were CIB, so Archimendes has been slightly more available loose and much more available CIB despite there being 6,000 less copies of it out there.

Lets take a look at those two copies of Archimendes available now, because they both raise eyebrows. This one here ends in a few days and bidding is already over 50,000 Yen.  I find it quite suspicious:

It is complete and the cart is in perfect condition.  OK, you might say, that in and of itself isn't suspicous since there are probably at least a few copies of this game which have survived in mint condition.  But there is a red flag to be found in the insert containing the serial number (this is in the lower right of the four things in the photo, I put a larger close up of the photo from this listing at the top of this post).  It looks legit except for one thing: no serial number!  The serial number is supposed to be stamped on the bottom of the yellow portion,  Super Potato put a photo of one they had on their Twitter feed a couple of years ago and you can see the serial number stamped on it here. The missing serial number isn't conclusive evidence that it is a fake, I've seen it suggested on Japanese sites that ones without the serial numbers may have been given out to employees as gifts, but comments like that are always very speculative and nobody ever cites a source for that rumor.  At best I would say it is possible that this is legit, but the lack of a serial number (and also the lack of close up photos) would make me very reluctant to bid on this one.

The other suspicious thing is that this seller only has 46 feedbacks and yet with such a short history of sales has already been called out for selling fake games!  The buyer in that case had purchased a copy of Magical Poppun, a very rare game for the Super Famicom, within the past six months and left the following feedback:

"Today I took the game to a game store to have them take a look and was told that it was a reproduction. The seller refused to provide a refund, saying I had not checked adequately, so I am leaving a negative feedback."


In the polite world of Japanese feedback that is a very stinging rebuke.

So the long and the short of it is that I do not have a lot of confidence that either of these copies of Archimendes is the real deal (though again I stress this opinion is expressed without the actual games in hand), and the same can be said for many of the other copies of the game I've seen up for auction on Yahoo over the past couple of years.  This is one of the main reasons I've been reluctant to pick of a copy of this game for my collection.  And my advice to anyone out there looking for one is to exercise extreme caution and be on the lookout, there be fakes here!

Postscript:  Another Famicom game that I think raises the same suspicions, and which there are documented fakes of, is the Recca Summer Carnival 92 cart.  It also shows up on Yahoo Auctions a lot, often in mint condition and, being housed in a standard black cart that there are millions of out there, isn't too hard to fake (though a bit harder, since the box is unique and it requires a label, which is where you can usually spot the fakes).