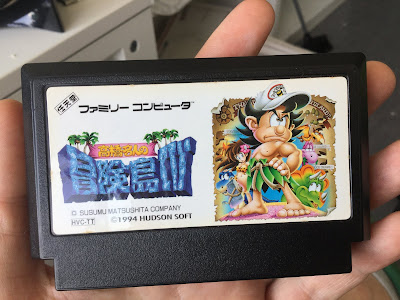 This week I scratched another game off my Famicom want list - Takahashi Meijin's Adventure Island 4!

It was released 24 years ago this month (June 24, 1994) which gives it a distinguished place in history as the last game ever released for the Famicom.  This also makes it one of the hardest to find since it simultaneously falls into several categories that make it a high-demand item:

I have wanted a copy of this since the earliest days of my collection.  Its every Famicom collector's white whale since the existence of the other Adventure Island games (all of which are much easier to find and cheaper) in your collection constantly remind you of its absence.  Its something about the numbering that plays on whatever elements of an obsessive compulsive personality lurk in your psyche - 1, 2,3.....where is 4?  Its an itch I need to scratch!!!

So I am relieved to have this in the collection now, though once again I find myself regretting not having purchased it a few years ago when I had the chance.  I distinctly remember holding my finger above a Yahoo Auctions BIN button for a nice loose copy at a price of 8200 Yen about five years ago and for whatever reason (hubris?  arrogance?  sheer stupidity?) holding fire in the mistaken belief that a cheaper one would magically appear.  I paid just under 14,000 Yen for this one and counted myself lucky.
Posted by Sean at 1:02 PM