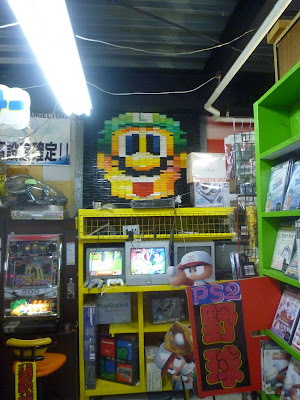 In a comment on a recent post Bryan raised the question of which consoles Japanese retro game shops generally stocked the most games for. I thought that would make an interesting question to devote a post to, so that is what this post will be about.

I took my camera to good old Omocha Souko's retro game section and basically photographed each console's section. I only looked at consoles they had at least a few games for, so unfortunately some consoles (Sega Master System, Epoch Cassette Vision, Virtual Boy, etc) aren't included. I also didn't look at any systems more recent than the Dreamcast, mainly because this store keeps its PS2 games and everything since then in the "current" game section.

So here we go. I'll run down the list starting from the smallest and working our way up to the largest in terms of games they have available. First up is: 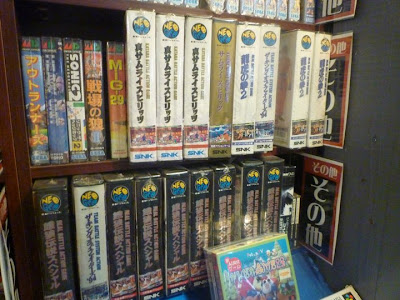 Omocha Souko probably has the worst Neo Geo section out of all the game stores that have Neo Geo games (most don't have any). Just these few boxed games, almost all of them on the bottom row being copies of the same game. All boxed, none loose. 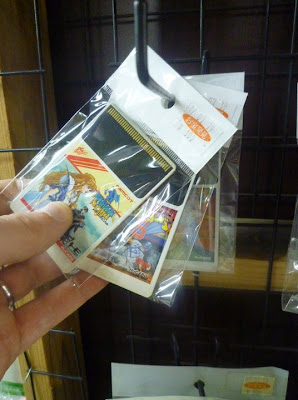 Their PC Engine section would have come last in the list but for their boxed section: 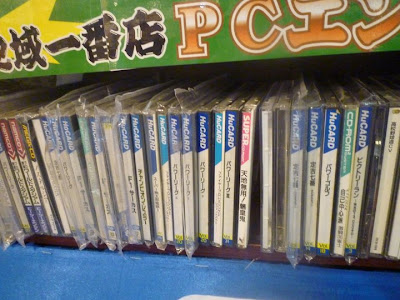 Not a lot - in terms of both quantity and quality - but at least they have a few! 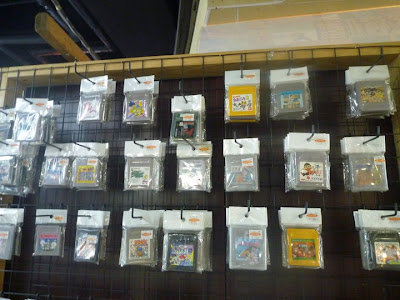 These are all the Game Boy games they have. They have a small number of boxed ones in addition to this elsewhere.

Omocha Souko has an unusually small Game Boy section, most game shops this size would have several times more. I happen to know why they have so few. Last year they did this sale where they gave you a basket and you were allowed to cram as many retro games into it as you could for only 800 yen. It was one of their best sales ever, I did a couple posts on it. To really get your money's worth, size was important. You could only fit about a dozen or so Super Famicom games into that basket, but you could easily get a hundred or so Game Boy games. So naturally everybody (myself included) crammed their baskets full of Game Boy games. By the end of the sale they only had a few left, so the section in the above photo really just represents how far they have come since then in rebuilding their stock. 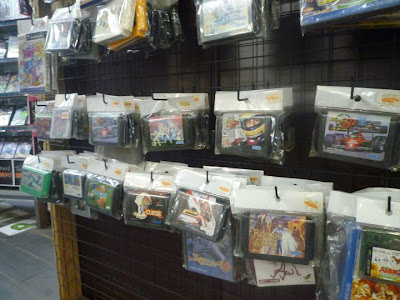 They have about 30 or 40 loose Mega Drive carts, and a larger number of boxed games: 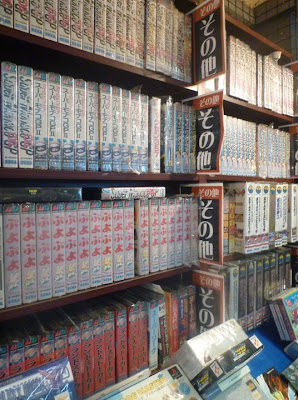 The Mega Drive is one of the few cart based retro consoles where it is more common to find boxed rather than loose games, on account of them coming in sturdy plastic boxes. This is actually only part of their Mega Drive boxed section, they have a couple dozen more on another shelf. You'll note though that the selection is not that good, they have endless copies of Puyo Puyo and Monaco Grand Prix for some reason. 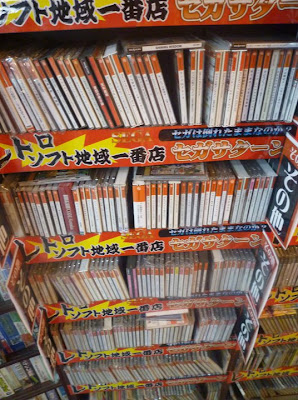 They have a pretty good shelf full of Dreamcast games here. I'm not sure how the quality goes, its not really my console, but the prices are pretty cheap (100-500 yen each). 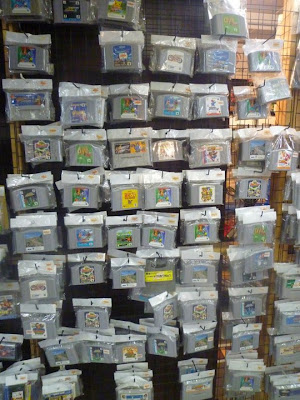 This is their loose N64 section. They have a boxed section as well which I neglected to take a picture of, but that adds a fair number to the total.

As an aside, the Nintendo 64 is the one console that I have officially ceased purchasing new games for due to the fact that I have actually acquired all of the games I am interested in for it. I have this section to thank for most of them, including Perfect Dark, which was the last one I wanted. 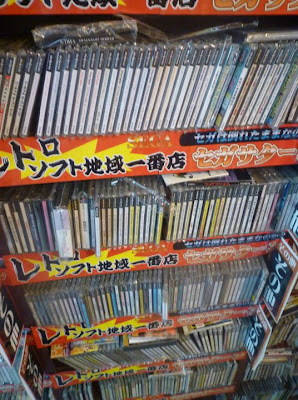 They have a pretty sizeable Sega Saturn section. The above photo shows half of it, they have an identical shelf that is also full of Saturn games. 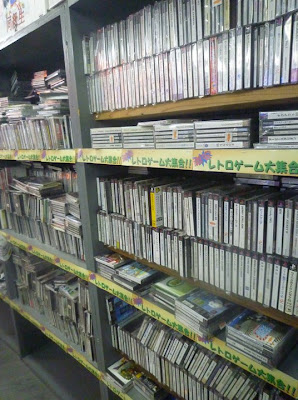 Their Playstation section is pretty big, though it used to be much bigger (all of it is in the above photo). Playstation games are basically the cheapest games you can buy there on a regular basis (ie without relying on any special sales or anything). You can kind of see in the above photo that some of them are bundled together in packs of five games. Those 5 game bundles only cost 200 yen each - which works out to 40 yen (about 50 cents) per game. You tend to get a mix of good and bad ones in each. Since they started doing that their Playstation section has shrunk dramatically, it used to take up about three times as much space. 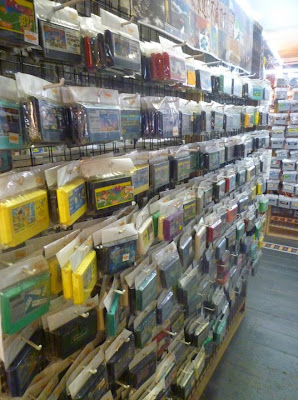 As I noted in a post last year, their Famicom section now is a shadow of its former self. When I first visited 3 years ago, they had thousands of Famicom games. Now they probably have a thousand or so. They have rebuilt their stock a bit since that earlier post, but it is still far from its prime.

Basically they have one aisle with games hanging on pegs from both sides: 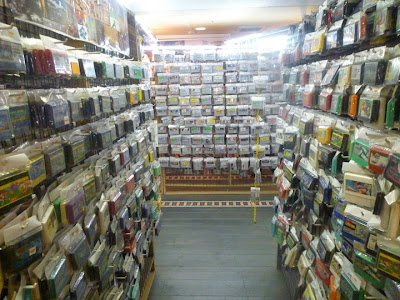 They also have a few in a case near the cash register, but not many. 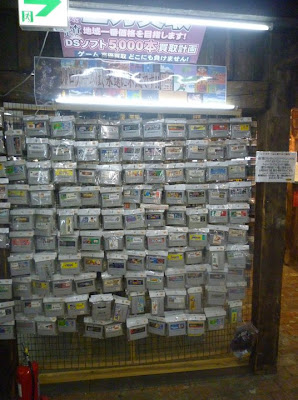 I don't think it would be too much of an exaggeration to say that Omocha Souko is drowning in Super Famicom carts. They are everywhere. On the wall in the above photo, in another aisle here: 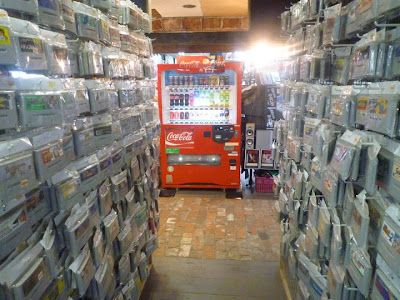 In crates scattered throughout the store: 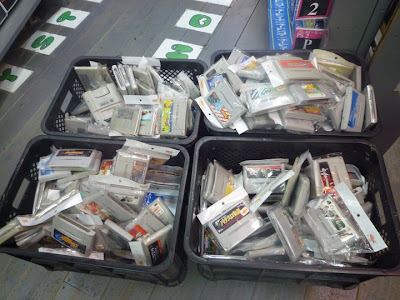 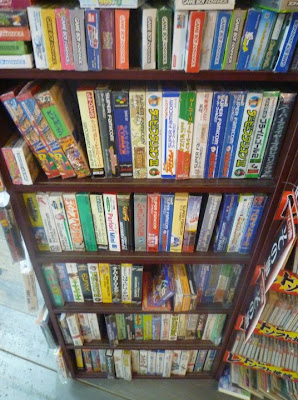 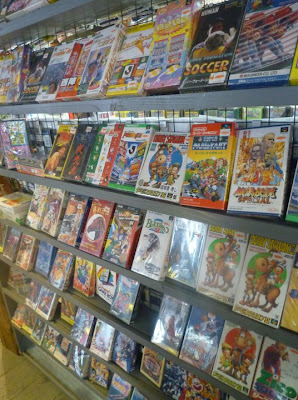 They are just everywhere. These photos only capture some of their stock. Thousands and thousands of games. Even when they have blowout sales people will only buy a smattering of Super Famicom games.

So there you have it - the top ten most heavily stocked video games in a relatively large retro Japanese game store. I think this is a good representative ranking, except for the Game Boy which would normally rank a bit higher at most stores.