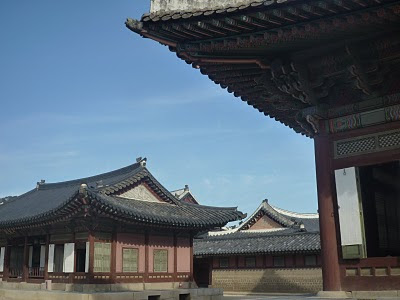 I just got back from a short trip to Seoul, Korea.

Well, `trip` probably isn`t the right word. I was there for a conference which had nothing to do with video games so I won`t dwell on it here, except to say that it regrettably took up almost my entire time there. I only had a couple of hours to actually explore a country of about 50 million people. If any of you are currently planning a trip to Korea, my advice is to give yourself more than a couple of hours to look around.

Anyway, a couple months ago when I decided to come to Korea, I thought it would be a great opportunity to check out the retro video game shops there and maybe pick up whatever the Korean version of the Famicom was (edit - the Hyundai Comboy).

I did some research online and was quite disappointed by what I found. Korea is quite similar to Japan in many ways and I had assumed that retro video game availability would be one of those similarities. It isn`t. Apparently Korea changed their entire electric power system back in the 1990s, which at a stroke rendered all electronics produced before then completely inoperable. So most of the 80s consoles and video games that I had hoped to find were scrapped years ago and are much more difficult to find than their counterparts in Japan. Even the Yongsan electronics market, I discovered, has virtually no retro games available.

I thus more or less gave up on looking for Korean retro games and reconciled myself to visiting some of Seoul`s more mainstream tourist attractions, like the Gyeongbokgung palace (pictured at the top of this post) which I highly recommend.

I also ventured into Insadong, a shopping district not far from the palace. It was while strolling its streets that I stumbled across the only vestiges of Korea`s video game past that I would discover on my brief trip.

Insadong is a really cool place. Lots of back alleys with trendy shops, restaurants and galleries. As I wandered the main street I noticed in the second floor of one building a number of what looked to be 1980s vintage toys in the window. It looked like it might be a small Korean version of Mandarake. There was a sign on the first floor that was entirely in Korean, which I can`t read, but the picture looked promising. 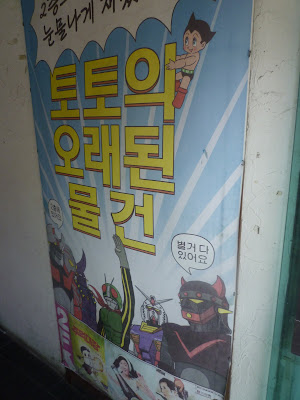 So I ventured up the narrow staircase to the store above.

At the top of the stairs, hidden in a corner by the store`s front door a rotund, middle aged man in a collared yellow shirt sat behind a cramped desk piled high with a ton of junk. He was sleeping soundly as a Korean drama flickered on a TV set. Not another soul was in the shop. But the sight of what laid inside just amazed me: 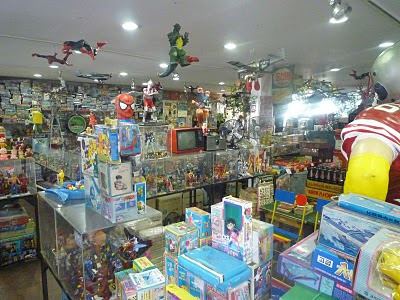 The place was bursting to the rafters with old toys, piled up in massive quantities in every square inch of space. It was like nothing I had ever seen before. I could barely contain my enthusiasm as I walked past the store`s sleeping owner and began wandering the aisles.

As I wandered, I noticed something a bit strange. None of the merchandise had any price tags on them. This always annoys me when I see flea market vendors who do that. I just never buy anything from them. It was the first time I had ever seen a store like that though.

At an instant, the lack of price tags, and other customers, was explained. This was not a store. It was a museum.

I thought about it for a second, then whipped out a pair of thousand Won notes and walked over to hand them to him. `OK, thank you` he said, and then turned his attention to the TV screen in front of him.

As a store, this place would have been awesome. As a museum that charged admission, it was laughably bad. It was just a big room where this guy dumped his lifetime accumulation of toys at random with little attempt at organization or proper presentation, as evidenced by this Last Action Hero Pinball machine buried in a mass of junk: 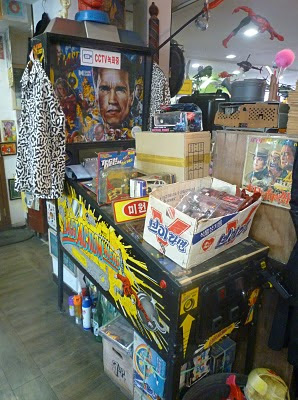 Yet this chaotic and indifferent approach to display made the place much more entertaining to explore than a professional museum would have been. I spent almost an hour wandering around just gawking at the stuff. Robots lined shelves: 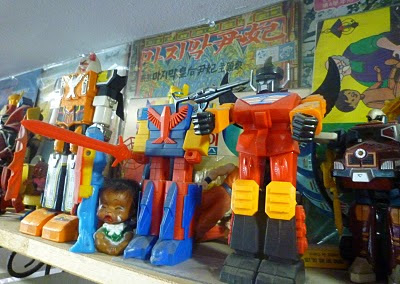 As did chubby helicopters: 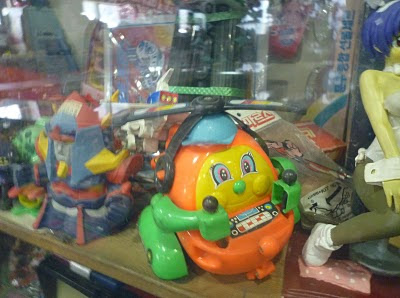 And TVs which would have been about Famicom vintage: 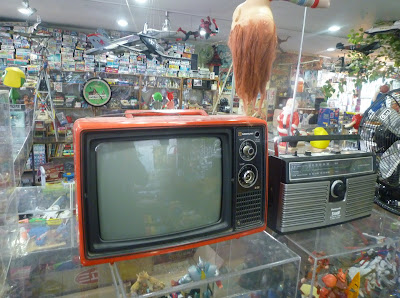 And, most important for the purposes of this blog, I also found some vintage video game stuff scattered here and there throughout the mess.

Under one glass case was a random pile of old hand helds, including one called Pac Boy: 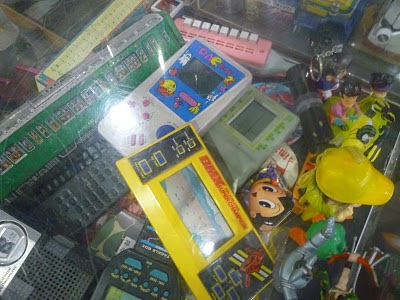 Another called Submarine Battle was lying on a shelf in some box: 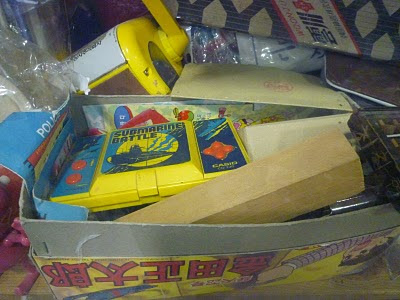 Star Force and Galaxy II could be found nestled behind some other retro treasures: 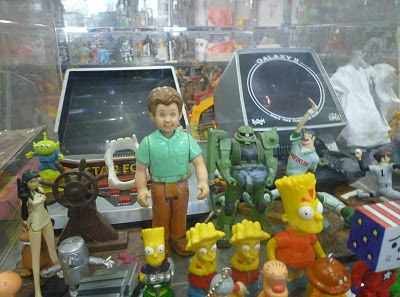 As could this blue one, whose name I forgot to write down: 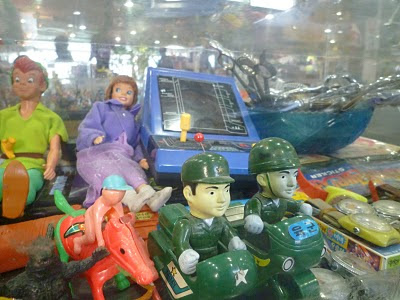 The best piece though I found lying on top of one of the cases. A Samsung Gam Boy, which was a dead ringer for the Sega Master System: 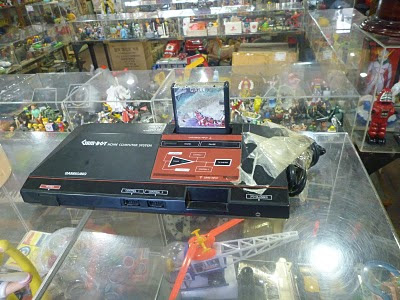 It is kind of a testament to just how bad (in a good way) that this museum was that the owner couldnt even be bothered to take the tape holding the AC adaptor off before putting it out for display. It didn`t have any controllers either and the copy of Gallog that it had was in pretty rough shape: 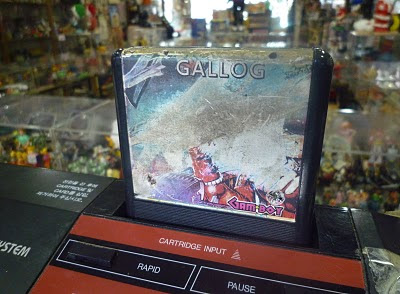 I`m not too sure how popular this thing was. Naturally I would have preferred to find the Korean version of a Famicom rather than its prime rival, but given the fact that I only had two hours to hunt for one, this was a pretty good consolation prize. 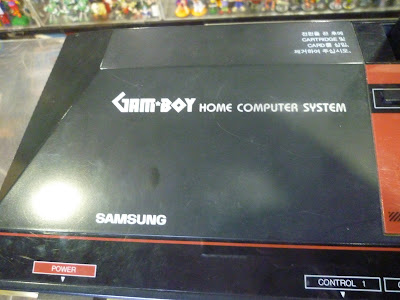 Anyway, that was my trip. I highly recommend a trip to Seoul, it is a great city. I`m already planning a proper trip there someday where I`ll have more than a couple hours to explore!
Posted by Sean at 9:16 AM