As someone who would refer to himself as a "video game collector", one question that has often plagued me when making a purchasing decision is whether or not I want a game boxed or loose.

I count myself as fortunate that these are the types of things that cause me worry.

When I started out trying to collect the whole Famicom set, I was only interested in getting the loose carts. The boxes and manuals didn't interest me much. I was mesmerized by the colorful carts and didn't really give those extras much thought. 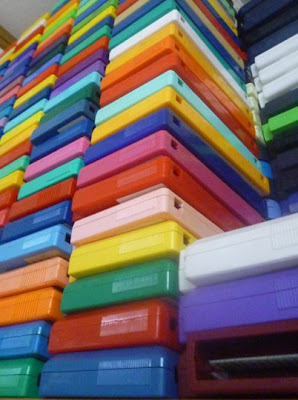 Over time though I've come to appreciate the boxes. A lot of them are just as colorful as the carts and exude that retro 80s vibe in ways that the carts alone are incapable of. 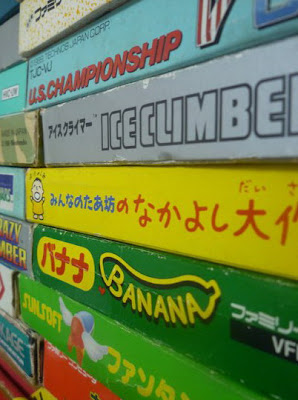 I've got about 30 or so boxed Famicom games. I think they look quite nice on my shelf. For financial reasons I'm still focusing on trying to get all the Famicom carts loose, but the boxes have won me over to the point where I am willing to shell out a bit of cash on the odd nice one every now and again.

For the most part I am only interested in the cardboard boxes though. The plastic ones just don't interest me. Some people praise them for being sturdier, but that doesn't impress me. They lack the charm of cardboard.

Wait, did I just praise the charm of cardboard? Oh the eccentricities of this wonderful hobby....

Anyway, part of this is timing - plastic cases started turning up relatively late in the Famicom's career so most of my favorite classic games come in cardboard. Namco's lineup illustrates this point well. All their numbered carts (Galaxian, Pac Man, Xevious, Burger Time, etc) came in tiny cardboard boxes, but their later games (Family Circuit, Family Stadium, etc) came in plastic boxes. The former look about a million times better than the latter. 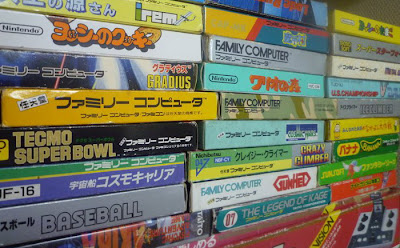 An oft-overlooked element that adds interest to Famicom collecting in particular is that it is the only Nintendo console where games came in a variety of box sizes and materials. Super Famicom and Nintendo 64 games all came in boxes made of cardboard (a plus) and of the same size and dimensions (a minus). Ditto with the GameCube and Wii, only they used plastic instead of cardboard. I'm sure there are the odd special edition game or something that bucked this trend, but by and large all boxes on subsequent consoles strictly conformed to a single standard.

I also have a small collection of Famicom Disk System boxed games. I'm not sure if these are boxed, actually. They come with their mini-cases anyway: 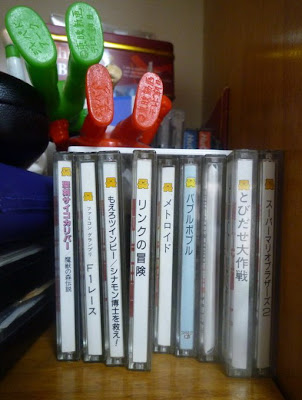 I find these kind of cute too. They are like CD cases only half the size.

Anyway, just some musings on the boxed vs. loose question.