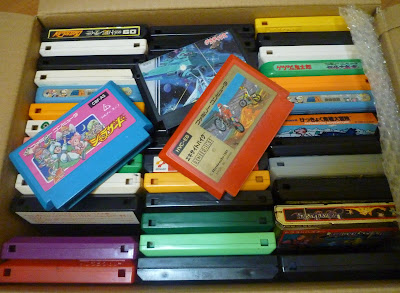 I finally did it. After years of procrastinating the closure of Omocha Souko finally forced my hand: I got myself a Yahoo Japan Auctions account.

The fact that I no longer have a decent Famicom store nearby has been a bit of a bummer. If I want games I now have to travel long distances to get to the nearest shops, which can be a brutally antagonizing experience if, upon arrival, you find that the shop doesn`t have anything that you want (which seems to be happening more and more these days). When you, say, ride your bike for nearly an hour to that Hard Off location way out in the suburbs only to find boxes full of stuff like this: 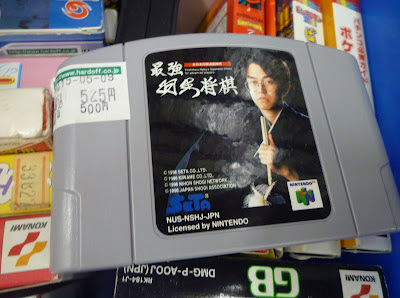 It can be quite disheartening (fellow Hard Off junk bin lurkers nod in agreement).

So I`ve been faced with the hard reality that if I want to continue my collecting at its previous Omocha-Souko induced pace (which is like collecting Famicom stuff on Jose Canseco levels of steroids) I would need to do something drastic. That something was getting off my ass and making a serious effort to figure out how to use Yahoo Auctions.

Ebay is not a big thing in Japan, Yahoo is the dominant player for online auctions over here. The basics are the same, but there are some details that are different. Obviously it is all in Japanese. Also you have to pay to become a full `premium` member, 346 yen (about 5$) a month. You can sign up for a regular account free of charge but you are limited to bidding on stuff under 5000 yen, meaning that even if you only buy one thing over that a month it is probably worth it to get the premium account, which I did.


I have been spending a ton of time on there because there is just so much Famicom stuff, a lot of it selling for quite reasonable prices, it is like having Mandarake in my living room. Like the title says, this has been way better than losing my actual virginity. Well, actually it has been quite similar in some ways - lots of awkward fumbling around at first until I familiarized myself with all the accepted protocols, the instillment of a conviction that this is an activity I would like to engage in on a regular basis, conflicted emotional responses and so on. In other ways though it is quite different: there is very little chance that my Yahoo Auction account will end in a messy break up that results in me getting beaten with an umbrella for example.

I signed up about a week ago and I`ve already spent way more than I can afford on stuff. Like, no kidding, I have bought about 600 Famicom games this week. I need help, I just cannot stop bidding on stuff! Argh!

Well, I should get some perspective here. It is good but its got its downsides too. Like Ebay the prices are hit and miss, people price gouge here too. But the auction stuff (rather than the Buy it Now stuff) can go for pretty decent prices, at least if you buy in large lots.

The upsides I think outweigh the downsides. Because almost everyone uses Japan Post transfers for payment there is no 3.9% paypal fee to deal with like on Ebay. Shipping is crazy efficient and cheap too, I`ve already started receiving stuff (like the box at the top of this page) that I only won 2 or 3 days ago.

And getting a box full of 100 Famicom carts in the mail is friggin` great.

Sniping also seems to be less of a problem as I found in one competetive auction that I eventually won. If someone outbids you at the last minute they extend the auction for a few minutes so you can respond (as can the other guy). I would have been sniped on one lot had it been on Ebay but after upping our bids by about a thousand yen I eventually won it.

Anyway, I`m going to be doing some posts about my new acquisitions because I`ve gotten some cool collection additions either here or on the way!
Posted by Sean at 5:34 PM