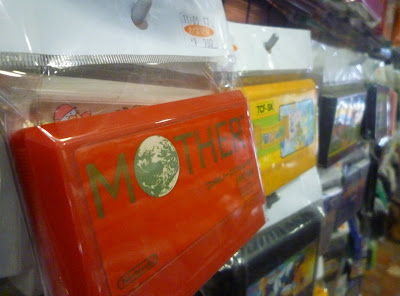 Yesterday my computer suffered some sort of catastrophic hard drive failure. Everything gone. The last time I backed up my stuff was about 6 months ago, so the thousands of pictures I've taken since then are gonzo.

This included a ton of Famicom related ones that I had taken and was saving for future posts on here. I probably lost about 5 blog posts worth of pictures. Bad computer, very bad.

Fortunately the memory card in my camera still had a few including these ones I took at Omocha Souko after they got a new arrival of Famicom stuff a couple weeks ago, so I thought I'd use them to make a post.

First the stuff in the glass cases: 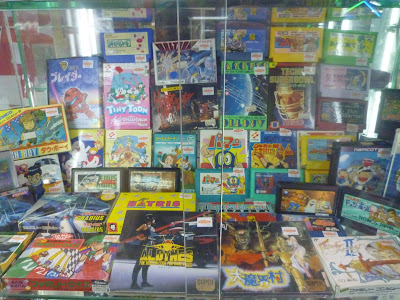 They put a lot of boxed stuff in there, much of which I purchased before this photo was taken. I got my copy of Crazy Climber out of here and a few others. I had taken a bunch of photos of my new boxed collection for a future post....but they have been lost. I'll have to set them up for another photo shoot sometime.

Anyway, some of the stuff in there is reasonably priced (Tiny Toon Adventures CIB for 300 yen), some of it isn't (Baltron CIB for 1200). I think it looks rather cool though, Omocha Souko hasn't had a neat looking Famicom showcase in a while so it is refreshing to see this.

The case below that one is pretty cool too: 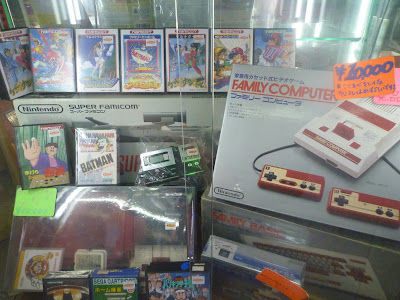 The Famicom on the right is a new one in mint condition for 10,000 yen. I haven't looked inside of the box, but that seems like a pretty good deal based on what they go for on Ebay.

The clear plastic box to the left of it is a pretty decent deal too. It contains a complete Famicom, complete Famicom Disk System and a copy of Super Mario Bros. 2 for 10,000 yen (about 120$). It says they have been tested and work and if that is accurate it is a reasonable deal (but I don't trust them over stuff like this anymore.)

They have also accumulated a pretty good pile of junk Famicoms for 300 yen each. I just like the look of piles of Famicoms so I took this photo: 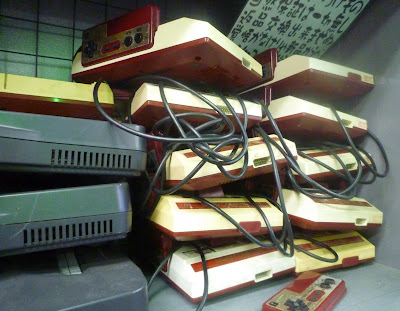 As usual, my favorite sight was the new crate of junk Famicom games they had put out: 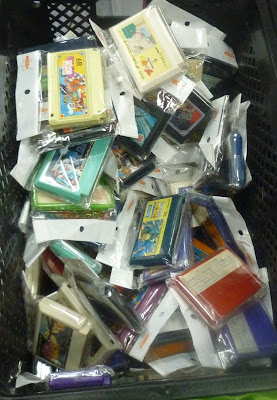 As I now find myself short on photo material for future posts, instead of introducing all the games I got, I thought I might introduce these one by one in a series of "100 yen Famicom Cart buys" posts. Stay tuned to this space!