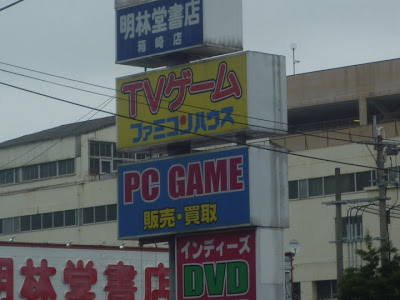 As someone who likes to go around to retro game stores looking for old Famicom games, one thing that really annoys me is when a store goes so far as to include the word "Famicom" in its own name, but doesn't actually sell any Famicom stuff.

The above photo is a picture of a sign in front of a game store I ride past sometimes. The yellow sign says "TV Game Famicom House", which is the name of the store.

It is, however, a chain store, and every time my travels take me to another branch I'm always tempted to go in. "Oh, this one MUST have Famicom stuff" I think to myself. I always leave disappointed.

Last week a really good blog post went up on the Japanese blog Famicom no Netta that explains this most annoying of store naming trends.

When the Sega Saturn/ Playstation/ N64 generation came out I guess they just figured "Crap. Its going to cost a lot to replace all our signs and company letterhead. Screw it, leave the word Famicom up there."

So, though annoying, these stores like Famicom House are an interesting relic of a day when the word "Famicom" simply meant "Video game system". This is of course quite similar to the way kids in North America used the word "Nintendo" to describe consoles in the 80s until the Super Nintendo/ Genesis came out and forced us to start differentiating between them.

The post on Famicom no Netta also has some other very interesting examples of how the word "Famicom" is still used in some instances to mean just console. The post is actually mainly about how local governments still seem to think the word "Famicom" means console. I hope they won't mind my stealing this image here:

(Image Source)
This is a section of a list created by the Eto ward office in Tokyo, which enumerates different kinds of large garbage and how they are to be disposed of. Between "Fax machine" and "Fan Heater" you have "Famicom" (2nd item in the list) which is to be disposed of as "Unburnable garbage". This doesn't just mean Famicoms, but game consoles in general. Famicom no Netta has a whole bunch of these from various local governments mainly around Tokyo. I think this is kind of neat.

Anyway, if you ever happen to pass this store: 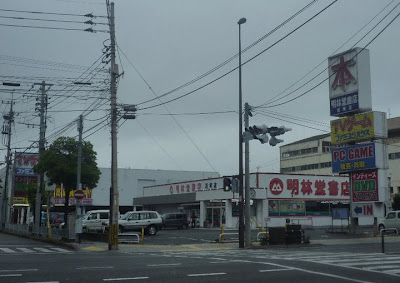 Remember that it doesn't have any Famicom stuff. Just current generation games and lots and lots of pornography.
Posted by Sean at 1:05 PM