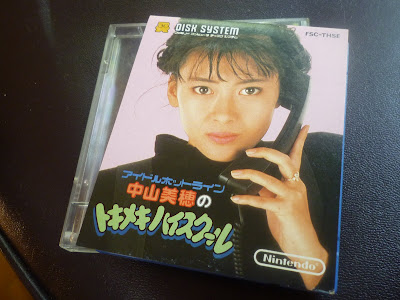 I was at a Book Off this morning and as I was rummaging around their old junk video game section I came across a copy of my new favorite Famicom game: Idol Hotline Nakayama Miho Tokimeki High School.

I've never played this game and don't care if I ever do. Its still the best Famicom game ever made. Because its the only one that's got Miho Nakayama.

Actually I had never heard of Miho Nakayama before today. Because I was stupid and ignorant. Miho Nakayama was a big pop star and actress back in the 80s and 90s. 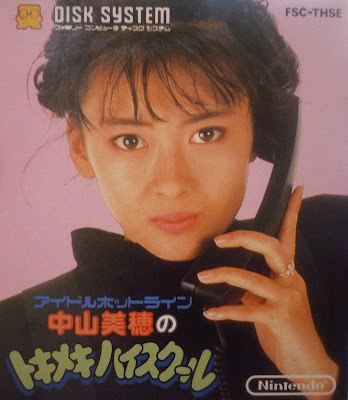 I would have totally had a crush on Miho Nakayama if I had seen this game in 1987. 1987 was a good year for me and crushes on teen pop stars. For ease of reference, I present here a year by year breakdown of girls I had crushes on in the mid to late 80s:

1985: The pretty girl from the Goonies (not the one with the short hair. The other one), the brunette from Facts of Life;

1986: Alyssa Milano, the blonde girl from Facts of Life;

Look at that 80s look she's got. Tussled bangs, high puffy collar. And there is even more Miho on the disk itself:

Look she's calling some guy on the A side. I wonder who???? Tee hee. 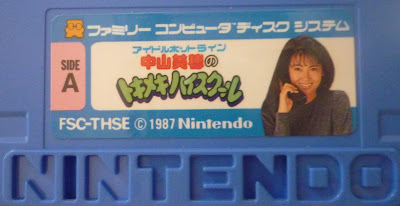 Ahem. Anyway, about the game. From what I've gathered from an excellent walk-through of the game at GameFAQs, this is an interesting one. Kind of a walk through adventure game where the game gives you phone numbers and you call and listen to a voice recording of Miho telling you stuff.

Yup, that is right. You get to call Miho Nakayama in this game. And she smiles and talks to you on the phone, just like in these pictures. One word:

If I had possessed this game as a kid, I would have called those numbers a lot. Kind of like Lisa in that episode of the Simpsons where she gets addicted to the Cory hotline. Our phone conversations would have gone something like:

This would have been repeated ad nauseum.

Anyway, go buy this game, whoever you all are reading this (Miho? I'd like to think so). Just get it. It is great.

Postscript: Courtesy of Mark in the comments section, you also have to watch this original commercial for the game. Superb!

Related Posts:
-Back in the USSR, Thats Where Famicoms Are
-M.U.S.C.L.E. Men and the Famicom: Kinnikuman Muscle Tag Match

Email ThisBlogThis!Share to TwitterShare to FacebookShare to Pinterest
Labels: Crushes I had on girls in the 80s, FDS games, Miho Nakayama