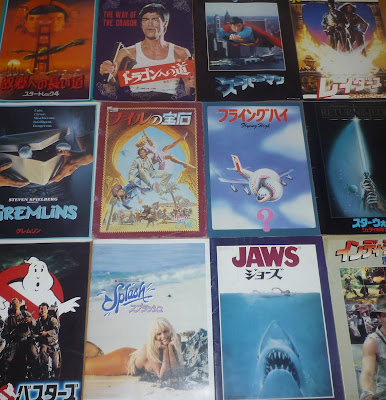 I`ve been out of the blogging world for a week or so since my computer completely crashed a few days ago. I now have a new one though so I`m back, baby! Back in blog.

One of the main reasons I like collecting Famicom games has nothing to do with video games per se. Rather, I like them as something that is cheap, fun to collect and which reminds me of my childhood, but in a kind of Japan-y way.

Japan has a lot of cool stuff like Famicom games for foreigners like myself to collect. A lot of this stuff is insanely cheap too which is great. My first taste of this came about a decade ago when I was at a flea market in Kyoto. A number of booths had old coins and I picked one up with a sign saying "Northern Sung Dynasty". The coin was over 800 years old. The price? 100 yen (about a dollar). I accumulated quite the pile of old coins in my first years in Japan, some of them up to 2000 years old, most of them dirt cheap.

Like Famicom games a lot of these old coins were a dime a dozen to Japanese people, who see them all the time. There are of course a lot of expensive ones out there too, but the run of the mill ones, as with run of the mill Famicom carts, are so cheap they are practically giving them away. As they say, one man`s trash....

Anyway, I thought I`d devote a few posts here to some of the other retro collecting hobbies that Japan has to offer. Like the Famicom (and unlike ancient coins) these all generally fall into the realm of Japanese versions of stuff you might remember from your childhood. Today`s post looks at one of my favorites: Japanese movie programs. 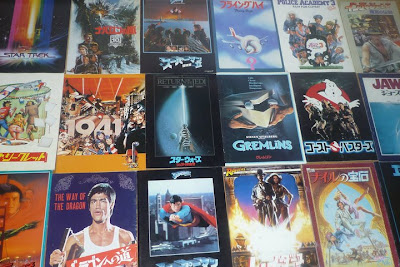 If you ever go to the movies in Japan you`ll probably notice the souvenir stands selling programs to the movies being shown. I don`t think I`ve ever seen this type of thing back home, but in Japan movie programs are pretty common. They usually have 20 to 30 color pages with photos and info about the movie, behind the scenes stuff, etc etc.

I never buy these at the movies myself as they don`t seem worth an extra 5 bucks on top of the already bloated ticket price. 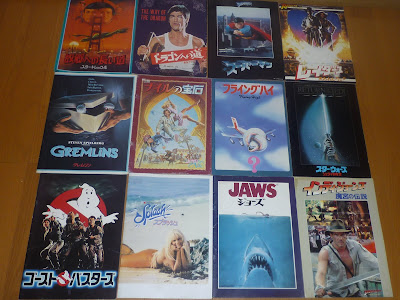 Instead I kind of got into collecting them by accident one day (much like how my Famicom collection got started). I was at a used book shop that had a whole shelf of these things for 100-300 yen each. I took a brief glance and saw a few from recent movies that didn`t interest me much. Then I leafed through the row a bit and found one for Ghostbusters. I was taken aback.

" Really? They made these things back in 1984?" I thought to myself. I had seen these things in book stores all the time but until then I had always assumed they only had ones for recent movies and none of the "classics" of my childhood. Intrigued I started really searching through the pile and within minutes I was pulling out programs from old films like Raiders of the Lost Ark, Jaws, Return of the Jedi, Superman and a ton of other great old movies.

I was instantly hooked.

These are a really great, cheap thing to collect if you are a film buff. These are pretty much the only cheap and attractive pieces of movie memorabilia out there that people actually got at the theatres when the movies were originally playing (these weren`t sold in stores).

They have great cover art (usually the movie poster). This is the one from Gremlins: 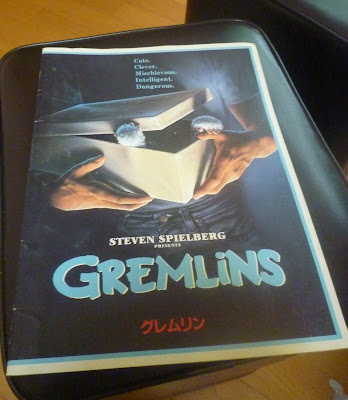 This one I really like because it has a pop-up centrefold: 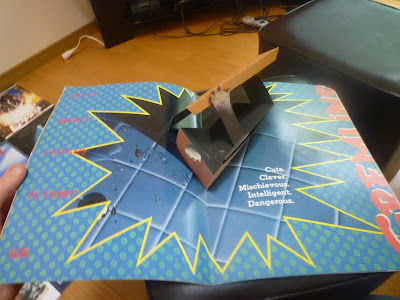 And this picture of Gizmo: 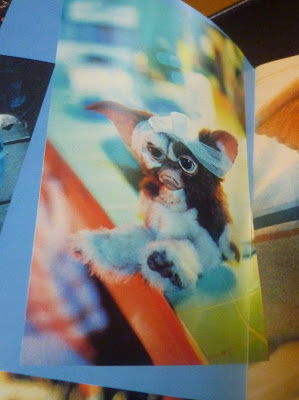 Anyway, these are a kind of neat thing to collect if you like movies. Hollywood`s version of the "Japan-only" release!
Posted by Sean at 9:40 AM