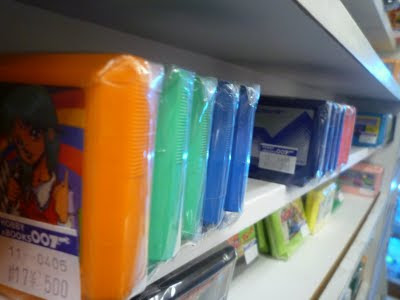 ne of the things that I've noticed here and on other blogs and retro game sites is that pretty much every North American retro game collector's mission in life is to one day come to Japan. Why? Because of the amazing retro game stores the country has - best in the world by far.

This makes a lot of sense to me. My memory of video game stores in Canada is pretty bleak. They just kind of....suck. Very unattractive decoration, very limited stock of old games (if any) and very few bargains to be found (if any). I'm sure there must be some good game stores in Canada, but I've never actually seen one myself.

As my experience is limited, I wanted to check if there were any amazing retro game stores in big American cities like New York. So I did a Google image search for "American retro game stores". Ironically most of the hits in the first page were actually pictures of Japanese retro game stores. I did, however, find this blog here, which has a write up about a few decent-looking shops in New York. I note that one of those shops is run by a Japanese guy and another, ToyTokyo, is consciously modeled on Japanese toy stores.

So anyway, I think it is safe to say that Japanese retro game shops are in general much better than American ones. The question I am interested in answering is why.

If you think about it, it is kind of a mystery. America has a much larger population (and hence gaming population) than Japan and a much larger economy. Retro video games have a much longer history in America too, the industry didn't really take off in Japan until the Famicom's release in 1983, by which time there were so many video game consoles and games being produced in the US that the whole industry crashed.

These factors suggest that America should have better retro game shops than Japan because it has a larger base of gaming enthusiasts and a larger supply of retro games and consoles. But it actually doesn't have better shops. Here I'm going to just suggest a few factors that might explain the mystery, in no particular order.

This has a big effect on people's lives, part of which has to do with storage space. Japanese houses do not have basements or attics and, if they have a garage, it is for keeping the car in and not storing crap.

North Americans on the other hand have insane amounts of storage space. They can keep stuff for years and years even if they don't use it. Case in point: my childhood Commodore Vic-20. The last time I (or anyone) played it was in 1991. The 20 years since then it has sat in a box in storage at my parent's place, waiting for the day when someone takes an interest in it again.

I suspect that a huge wealth of North American retro video games are similarly stored right now, just sitting there collecting dust rather than, say, sitting on the store shelves of retro game stores.

Japanese people, for the most part, don't have that luxury. Their cramped living quarters prevent the accumulation of crap that they don't use. Closets are in short supply.

I'm theorizing here, but having all of these things in circulation gives retro game shops here a ready supply of retro video games being sold by people who don't really care what they get for them, so long as they are out of their homes. This obviously gives them a big advantage. Mandarake, for example, has two entrances - one for people looking to buy stuff in their store and the other (which is just as big) which is exclusively for people looking to sell stuff. They have no problem finding stock, it finds them. North American retro game stores, on the other hand, probably have a lot tougher time finding good stuff.

This is another odd one, but it bears thinking about. Japanese cities do have their fair share of ugly urban sprawl, but in general cities here are much, much more compact than American ones and have bustling city centres that are densely populated and pedestrian and bicycle friendly.

American cities, by contrast, tend to be sprawling messes surrounded by god-awful subdivisions and box stores for as far as the eye can see.

I think back to a year I spent living in Winnipeg, which in most livability ratings ranks just ahead of Kabul and a hair behind Baghdad. It sucks. The city centre is a dead zone and the suburbs are just a depressing, sprawling mess.

This carries over into the retro game shops. I drove around to a few while I lived there. All of them were in strip malls surrounded by massive parking lots and completely inaccessible except by car. They looked like your typical strip mall store - bland. They didn't have much selection, their prices weren't very good and the whole experience of going to the places was just unpleasant.

Japan's game shops? Well, take Mandarake here in Fukuoka. It is in the middle of a bustling, vibrant city centre. Nobody drives a car to get there, it is on a street bustling with pedestrians and cyclists and with a subway station just up the block. I go there by bicycle pretty often as it is on the way to other stuff. There are cafes and parks and other cool stores nearby. All of this makes me want to go there and makes it easy for me to do so. Akihabara in Tokyo and Osaka's Den Den Town are in similar neighborhoods.

My point here is that good gaming shops thrive in a certain environment. Japanese cities do a good job of providing such an environment, American ones much less so (though New York does have some similarities and, not surprisingly, seems to have the best American retro game/ toy shops). Shops in such areas have a ready supply of potential customers in the thousands of people just walking past their store fronts each day. Strip malls surrounded by seas of asphalt do not get customer traffic like that - basically only people who specifically plan to go to that specific shop and are willing to go out of their way to do so will visit. That is a huge disadvantage that really limits their growth potential.

One thing about Japan is that flea markets and garage sales are not a regular happening. There is a flea market at a shrine near my place once a month that I write about here sometimes, but that is basically it.

A corollary of this is that outside of game shops there aren't a lot of places to buy or sell retro games at here. Yahoo auctions is about the only one I can think of.

Bottom line: North American game shops face a lot more competition from other means of distribution than their Japanese counterparts and this probably explains a bit of their general suck-iness.

4. Japanese Stores in General are Nicer than American ones

This is something that maybe relates a bit to culture. Presentation is - in general - much more important in Japan than America. Most game shops invest a lot of time and money making their merchandise look good - for example by putting those cute handwritten labels on everything - just because that is the way things are done here. This makes the shops look way nicer. A lot of the game shops I went to in North America just haven't gone that extra mile.

I have to be careful here though. Not all Japanese game shops look great, and some North American shops undoubtedly do. A lot depends on the efforts put in by the individual owner. I think in general though that more Japanese store owners/ staff do this than American ones do.

Anyway, that is just four possible reasons that popped into my head to explain why Japanese retro shops are so much better. There are undoubtedly others that I haven't thought of. The only thing that I know for sure is that the shops I've been to here are really, really great and if you haven't been, be sure to do so someday.