The Coolest Vintage Mario Thing Nobody Knows About 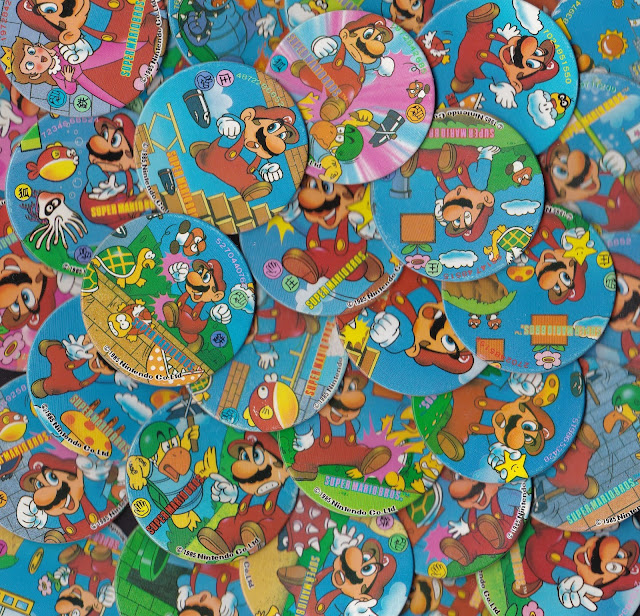 One of the cooler and also  (for some reason) least known Mario "things" out there is a set of round Menko cards that were released in Japan in 1985  and feature artwork inspired by the first Super Mario Bros. game.

As you can tell from some of my recent posts I've become interested in tracking down and collecting all of the Famicom related menko which came out in the 1980s.  Menko are kind of like a cross between baseball cards and pogs and have a long history in Japan as kid's toys.  In the same way that American trading card makers like Topps cashed in on the video game craze in 1980s North America by producing sets of cards featuring Donkey Kong, Pac Man and other big name video game characters, in Japan a company called Amada produced Menko featuring a lot of Famicom related ones.

Unlike those Topps sets in the US which are well catalogued however nobody has ever sat down and done the same for Amada's vintage video game menko, in English or Japanese, so I've decided to try to do that here on this blog since this information deserves to be out there somewhere!  I'm not sure why so little info exists about them on the internet.  In comparison to American cards from the 1980s these ones are pretty hard to find, which is probably a big contributing factor.

With this post I'll do the Mario set and tell you everything I have been able to find out about it. 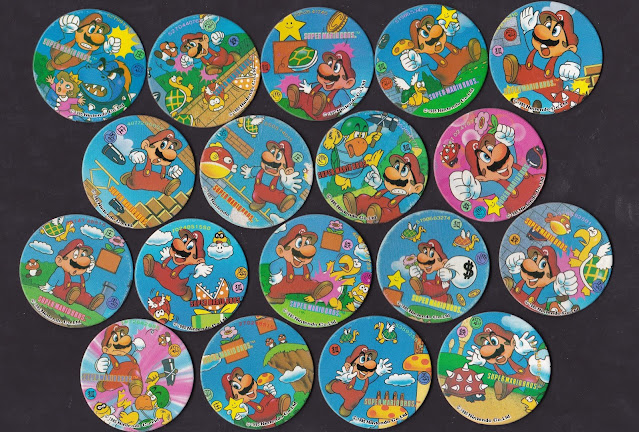 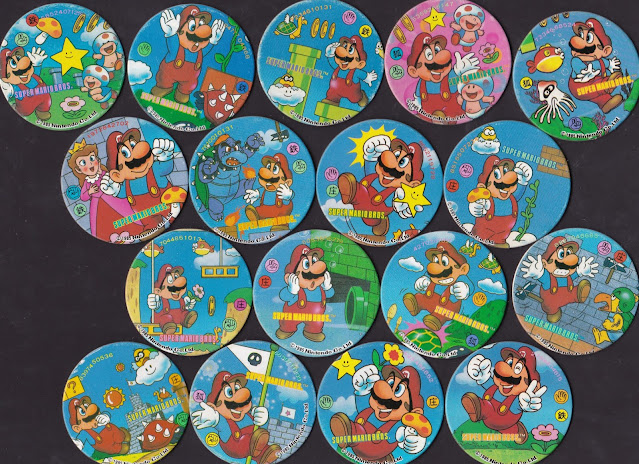 First, the above two pictures show all the cards in the "base" set that I've been able to identify, 35 different designs in total.  The cards measure roughly 4.5cm in diameter.  Since 35 is an odd number I'm pretty sure I do not have all of them since most menko sets are usually produced in even numbers owing to the manufacturing process.  I'm not sure but I wouldn't be surprised if there are 40 in total and I'm missing 5. 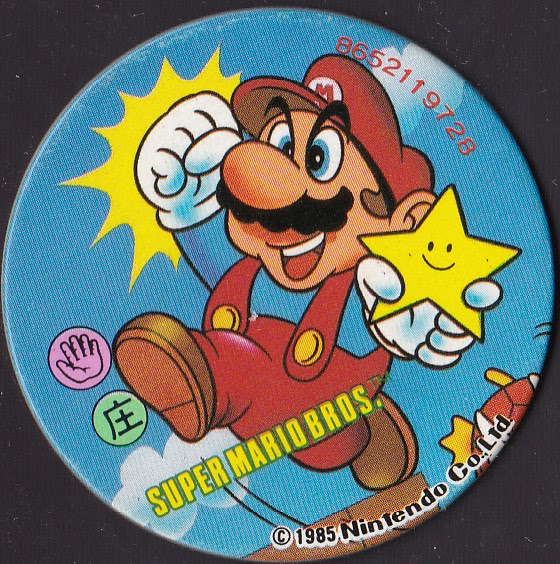 The picture for each is different, but they al have some common elements.  "Super Mario Bros." is written in bold lettering somewhere on the card, and there is a 1985 Nintendo copyright line on the bottom.

Each card design also has a unique number, which you can see above Mario's hat in the above example.  These were part of a game, basically kids could take two cards at random and whichever one had the higher number would win.

On the left side of the above card are two circles next to Mario's foot. These are also games.  The upper one with a hand is for a rock-scissors-paper game (again, take two random cards and play them against each other, this one would win in a battle against one with a rock on it, or lose to one with scissors on it).  The lower one has the kanji  庄 in it, which is a similar game called Kitsuneken that works the same way.  There are three potential characters, one for fox, one for village headman and one for hunter (fox beats village headman, village headman beats hunter, hunter beats fox.  This one is a village headman one).

The backs of these menko are blank.  Of the 35 I have only the two above have anything on the back. These are winner menko!

These menko would have been sold in packs in small candy and toy stores back in the day.    I've never seen an original box of packs of these, but with other stuff Amada produced they would usually come 40 to a box, Among those 40, 3 would contain a winner card like these which would entitle the kid who pulled it to redeem it for a prize from the store owner.  When kids gave them to store owners the store owner would scribble something on the back to indicate that it had been redeemed, then give the card back to the kid.  These two look like they were redeemed at different stores owing to the different scribbles on the back.

What prize would the kids get?  Bigger menko!

Amada made "parrallel" versions of at least some of the cards which were the same as the base set only bigger.  I've been able to identify 6 different sized versions of these cards in the photo below (the one on the lower left is a standard sized card) 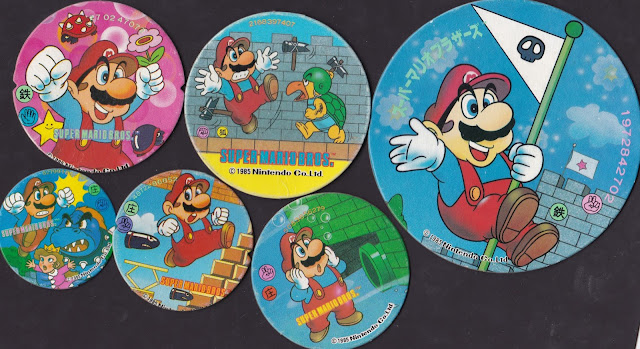 There might also be a seventh mega sized one out there but I am not sure.  I wrote about this one a few weeks ago, it features Mario but I don't think it is from the same set since it is from Super Mario Bros. 2 and features a 1986 copyright line.  Its existence though at least suggests that there might be similar mega sized version of these out there, but maybe not. 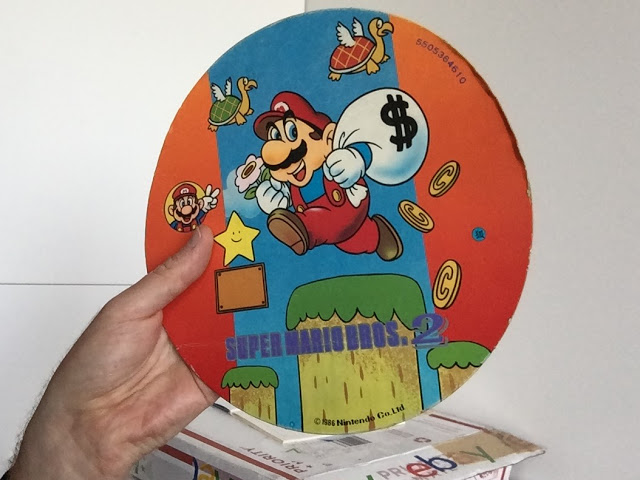 These cards are pretty cool in part because of the artwork, which really reflects how early these were released in the life span of Mario the character.  Mario himself looks very similar to the "standard" way of portraying Mario, but the other characters look quite different.  Princess Peach and Bowser on these two cards are good examples: 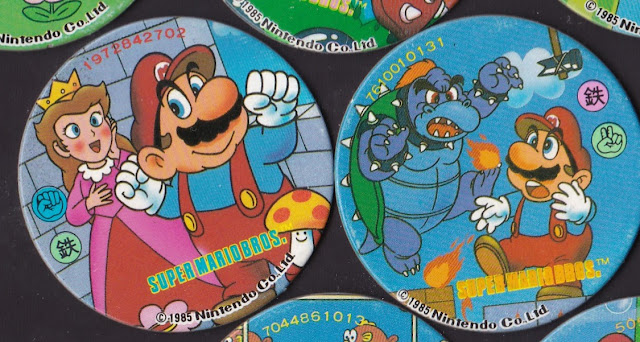 They really look nothing like how they are portrayed today (or even how they were portrayed just a few years after these were produced).  This likely reflects the fact that while a standard portrayal of Mario had been decided on back then, the details of the appearance of the less prominent characters were still up in the air and so the illustrators were a lot more free to use their imagination in rendering them.
Anyway, that is what I know so far about the 1985 Super Mario Bros. Menko set by Amada.  Its a pretty cool set with some awesome artwork on it and I think it deserves to be a bit better known than it is now, hence this post!
Posted by Sean at 11:30 AM